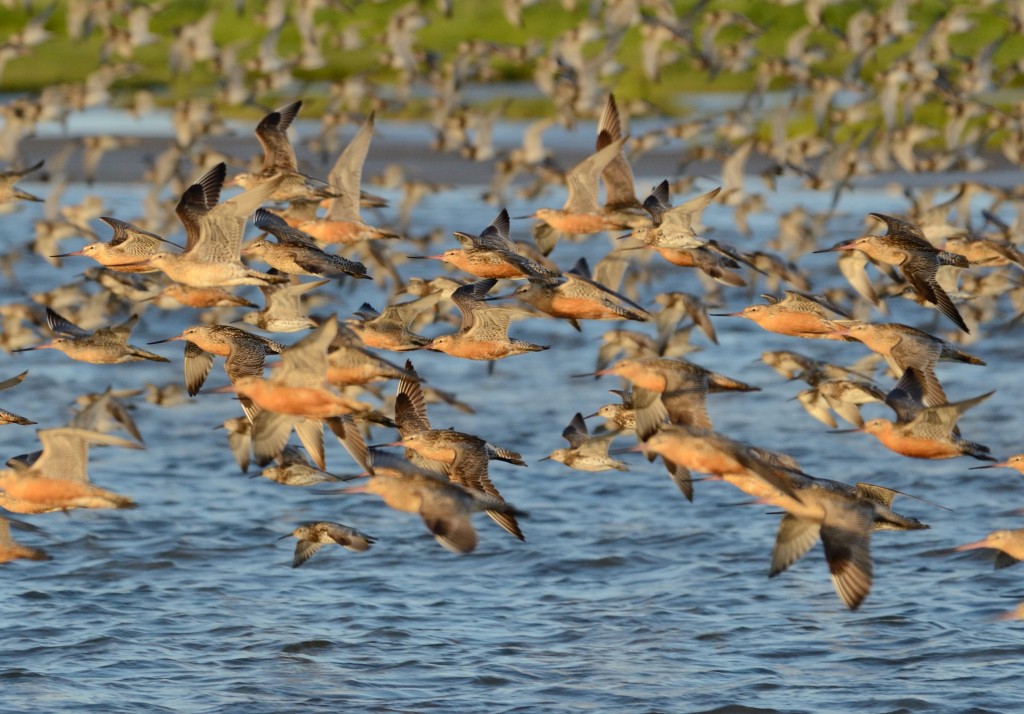 In the middle of August we finished our field season of 2017 and returned from Khairusova-Belogolovaya estuary in Western Kamchatka. Unfortunately this year we could not involve foreign volunteers. The funds for the expedition were only secured at the end of May and it was impossible to organise all necessary paperwork for visas and the like on time.

The largest part of our activities were dedicated to Great Knot (Calidris tenuirostris). This year we modified our trap and caught more than 500 waders, 360 were marked with Black\Yellow engraved flags. We already have five re-sightings from Japan, Korea, and China. About 130 birds were juveniles, which is key because it is very important to know if there are differences in migration between adult and juvenile birds.

The next important part of our work was searching and reading engraved leg flags. In the end of the season we had a total of 1526 records in our log book! In 2016 we had about 1800 records, but considering that this year we had only one good scope instead of four, the results were very good. More than 75% of the observations were made with the high quality scope that the Royal NIOZ lend us, just for this field season. For the next field season we hope to find additional funds to buy a high quality scope for the project.

Most of our re-sightings were of Great Knots colour-banded or flagged in Australia, China and Kamchatka. We also collected records of marked Black-tailed Godwits, Bar-tailed Godwits, Red Knots, Red-necked Stints and Dunlins. Observed waders were banded at least at 22 sites within the East Asian-Australasian Flyway, from Chukotka (Russia) to Victoria (Australia) and New Zealand. These data allows to calculate new estimates of the duration of the stopover of individual birds.

On the penultimate day of our field season we had a very nice surprise. While we were out doing observations we recorded the more or less famous Great Knot “EI” who was observed in winter 2017 near Dubai. This male Great Knot had started his southward migration very late so we can suppose that he had a successful breeding season!

Wader counts are also the part of our work. But, unfortunately, not the best part. Khairusova-Belogolovaya estuary is rather large, about 50 km2, and it is impossible to make total counts. So we have minimum estimates for the study site. Number of Great Knots varied from 230,000 in the beginning of July to 4,500 in the middle of August.

Also this year we repeated the benthos survey that we have been conducting since 2015. In total 201 sample were taken on the whole territory within a 500 by 500 m grid. This investigation will help us understand if there are any dynamics in benthos distribution between years.

The last, most important, activity of our team were observations on foraging juvenile Great Knots, that just arrived from the tundra zone to the mudflats, and on foraging adult Great Knots. In previous years we had noticed that juveniles feed much more slowly than adults. We think that juveniles do not have enough experience with feeding on bivalves. At breeding grounds they are used to feed on various insects, changing to bivalves might be a challenge for them.

The last goal of our studies was collecting information about rare species – Spoon-billed Sandpiper and Far-Eastern Curlew. We have rather detailed data about numbers and distribution of the Far-eastern Curlew in the estuary. From the middle of July till the beginning of August about 300-350 birds were feeding on the mudflats the closest to the camp. At least several dozens of Curlews used the most remote part of the estuary. This year we had not enough scopes and people to look for Spoon-billed Sandpipers. Only in the end of the season we were able to check types of mudflats that is preferred by this species. At that time juvenile birds started their southward migration.

We are planning to present the first data at the IWSG Annual Conference in Prague this September 2017.