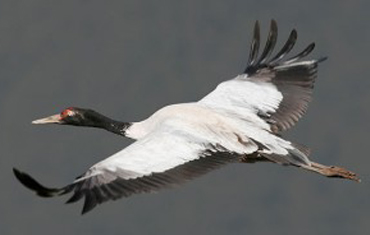 Migratory birds are species where a substantial proportion of the global or a regional population makes regular cyclical movements beyond the breeding range, with predictable timing and destinations (Kirby et al. 2008).

Migratory birds are the entire population or any geographically separate part of the population of any species or lower taxon of wild birds, a significant proportion of whose members cyclically and predictably cross one or more national jurisdictional boundaries (Kirby et al. 2008).

For the purpose of the Partnership, migratory waterbirds include populations of shorebirds, Anatidae (ducks, geese and swans), cranes, and seabirds (for example Divers, Cormorants, Gulls, Shearwaters, and Auks) and several other groups, which cyclically and predictably cross one or more national jurisdictional boundary
(see Partnership Document, Appendix 2).

Large numbers of migratory waterbirds often congregate at staging sites (typically, few such sites) for refueling during their journeys, especially before crossing large ecological barriers. Consequently, the loss of staging wetlands may have critical impacts on successful journeys and survival of migratory waterbirds.

Spreadsheet of bird names and translations in partner languages.

Taxonomic groups of waterbirds migrating within the East Asian-Australasian Flyway

The Waterbird Population Estimates (WPE) online database provides current and historic estimates, trends and 1% thresholds for over 800 waterbird species and 2300 biogeographic populations worldwide. This project has been developed by Wetlands International with the support of Environment Canada and the Ramsar Convention on Wetlands.

The online database makes it easy to obtain information on the status of waterbird species, providing a comprehensive basis for management and decision making. All previous editions of the WPE series are included, and the latest Conservation Status Reports for the African-Eurasian Waterbird Agreement. The main objectives of these series has been to:

(i) identify wetlands of international importance through the application of the 1% threshold criteria under the Ramsar Convention;

(iii) identify gaps in knowledge of the world’s waterbird populations;

(v) support the development of regional/flyway initiatives, including the African-Eurasian Migratory Waterbird Agreement (AEWA) under the Convention on Migratory Species; the Convention on the Conservation of European Flora and Fauna (Berne Convention); the East Asian - Australasian Flyway (EAAF) Partnership; the European Union Birds Directive; and the Western Hemisphere Shorebird Reserve Network (WHSRN).