Eaaflyway > All News > A new crane species recorded for Mongolia 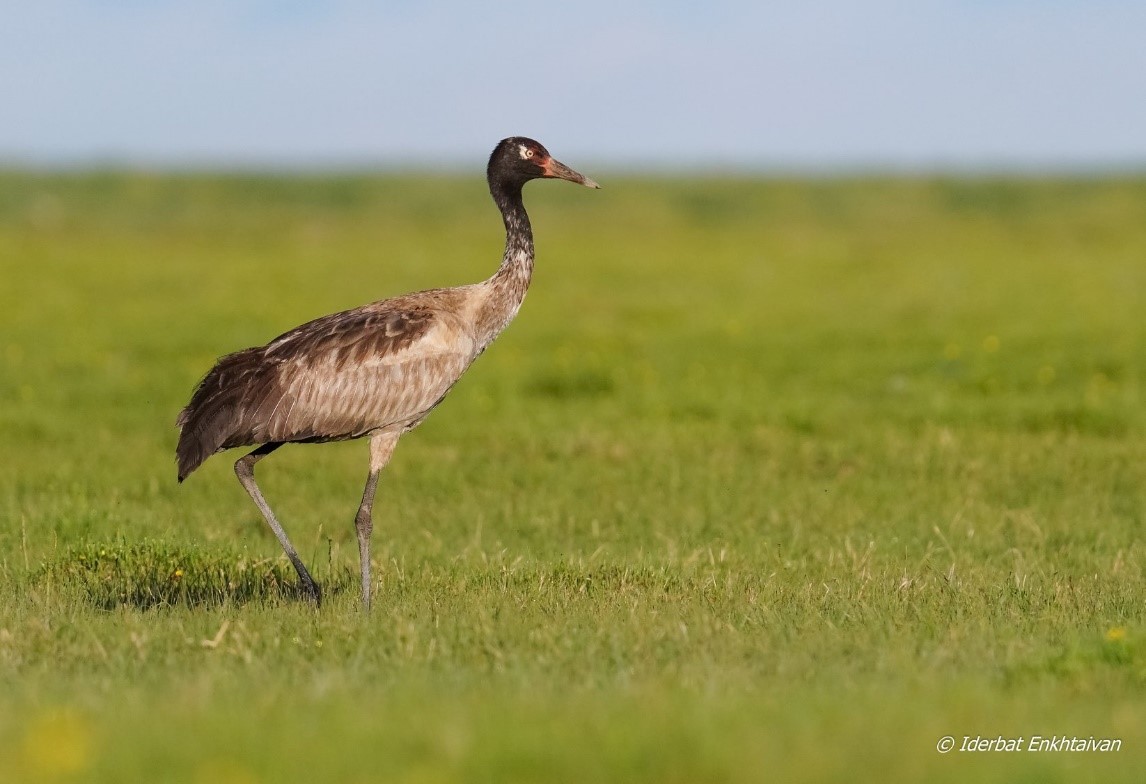 Recently, on 13th June, a Mongolian bird photographer, Iderbat Enkhtaivan observed a second calendar year Black-necked Crane in Khutag-Undur, Bulgan province, in northcentral Mongolia. He approached us for confirmation. The bird was together with two young Eurasian Cranes in the grassy meadow of the Selenge River Valley. It is a big overshoot of over 1000 km for this bird from its regular summering range. Normally this species makes migration that is less than 500 km long between the breeding and the wintering grounds in the Tibetan Plateau. We sent this exciting news to Dr. George Archibald, the co-founder of the International Crane Foundation. He replies “the crane photographed is a juvenile with much darker body plumage compared to the almost-white adults.  The photo demonstrates beautifully a comparison of the white area behind the eye. At fledging the head is completely light grey. As the head and neck turn black, there is phase where the light gray feathers remain in an area corresponding to the white eye strip in Eurasian Cranes. This gradually shrinks to become the tiny white triangle behind the eye.  At a distance it makes the crane look like they have a huge white eye!” Black-necked Crane is a vulnerable species with the total population of 10,000-10,970 birds that regularly breeds in Ladakh, and Sikkim through Tibet to Xinjiang, Qinghai, Gansu and Sichuan provinces in China. Usually occurs in high altitude grassy wetlands, boggy meadows, marshes along shores of lakes and small streams and pastures at 2950-4900 m above sea level. We assume the bird observed in northcentral Mongolia joined a small flock of Eurasian Cranes from Mongolia that was wintering in the Yellow River Valley.

This is the first ever record of this species for Mongolia. Mongolian crane researchers are very happy because it is the 7th species of cranes recorded in Mongolia. It was like a special treat for The Year of the Cranes and hopefully this bird will be over summering with the flock of Eurasian Cranes.