Eaaflyway > All News > Lianyungang, an important yet overlooked stopover site in the southern Yellow Sea

Lianyungang, an important yet overlooked stopover site in the southern Yellow Sea 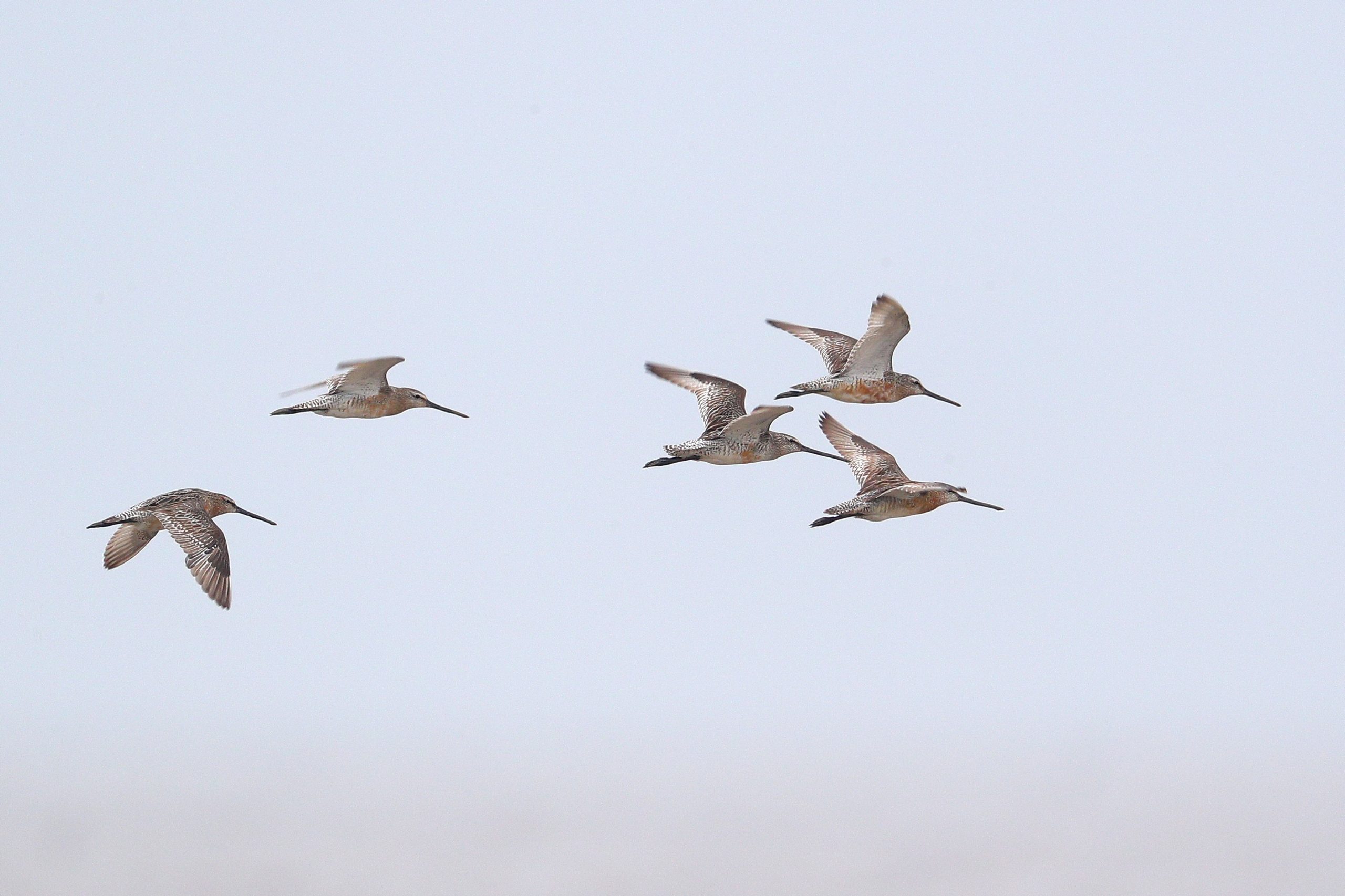 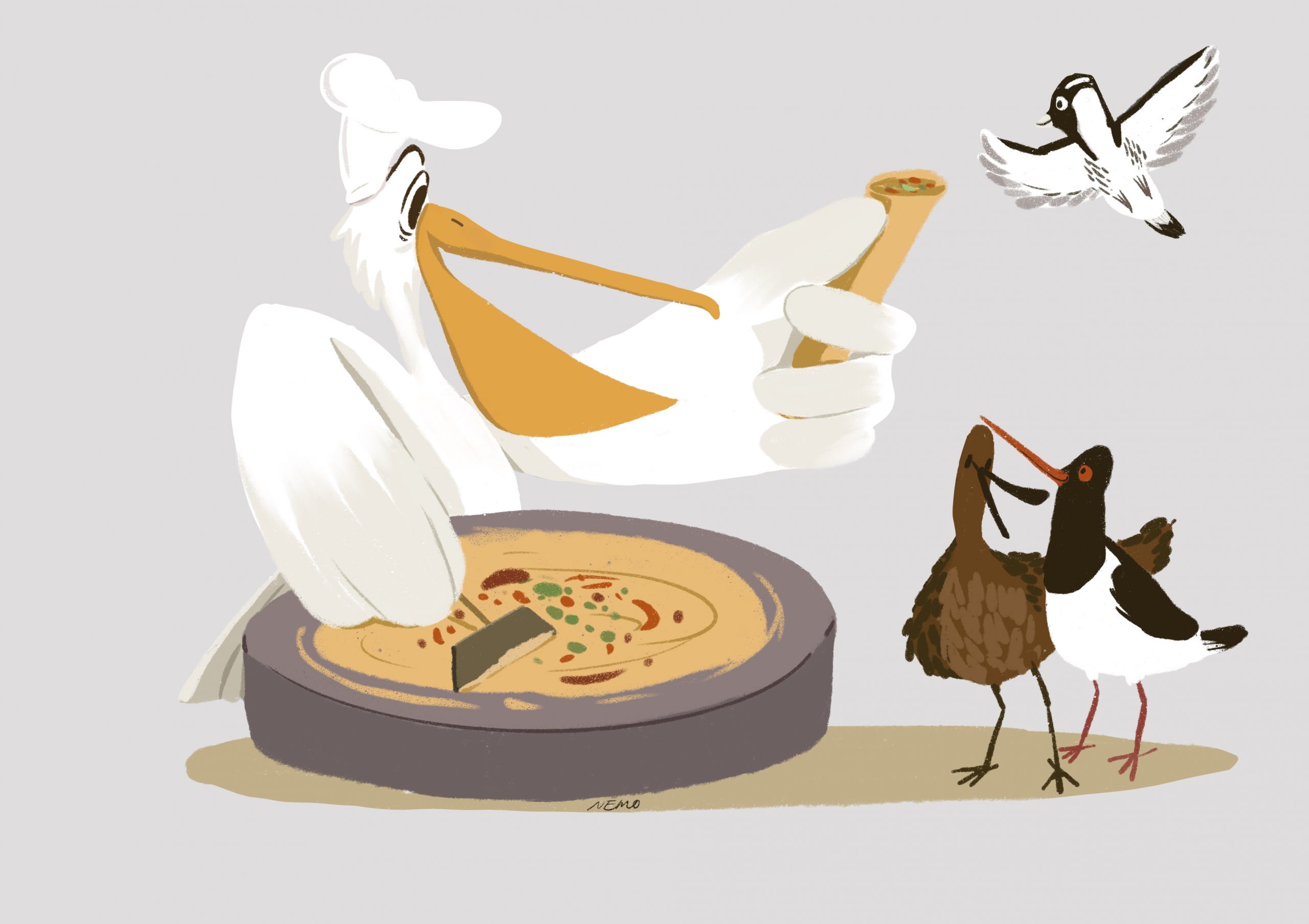 A Dalmatian Pelican is making Lianyungang pancakes for an Asian Dowitcher, a Eurasian Oystercatcher and an Ancient Murrelet. All four birds rely on Lianyungang during their annual migration. Illustrator © Nemo.

Over the past few decades, people have come to realise that tidal flats along the Yellow Sea-Bohai Bay are of paramount importance to migratory shorebirds along the East-Asian Australasian Flyway (hereafter EAAF). For example, several sites along the southern Jiangsu province of China have been recognised as the critical staging ground for globally endangered shorebirds such as the Spoon-billed Sandpiper and Nordmann’s Greenshank.

The improving awareness and knowledge were followed by varying degrees of conservation efforts. The most successful story was probably Tiaozini, the most important stopover site for Spoon-billed Sandpipers. In 2019, Tiaozini was included in the scope of natural World Heritage Site, which is the highest level of habitat protection and conservation in China. Unfortunately, sites without stable records of charismatic species like the Spoon-billed Sandpiper has been given little attention.

Lianyungang is a coastal city located in northeastern Jiangsu. With the Yellow Sea on its east, Lianyungang is roughly 300km north of Tiaozini. There are over ten major estuaries along its 212km coastline, creating vast areas of coastal tidal flats. Probably due to the lack of charismatic species, Lianyungang has been largely overlooked. Waterbird surveys in this area had mostly been conducted by a single volunteer in the past decade, meaning that temporal and spatial coverage were often limited.

During May 09-13, 2019, a non-profit organisation called Spoon-billed Sandpiper in China (hereafter SBSinChina) recruited ten experienced surveyors in an effort to conduct a comprehensive waterbird survey in Lianyungang. They found that significant numbers of several shorebird species rely heavily on the Lianyungang coast during northward migration. 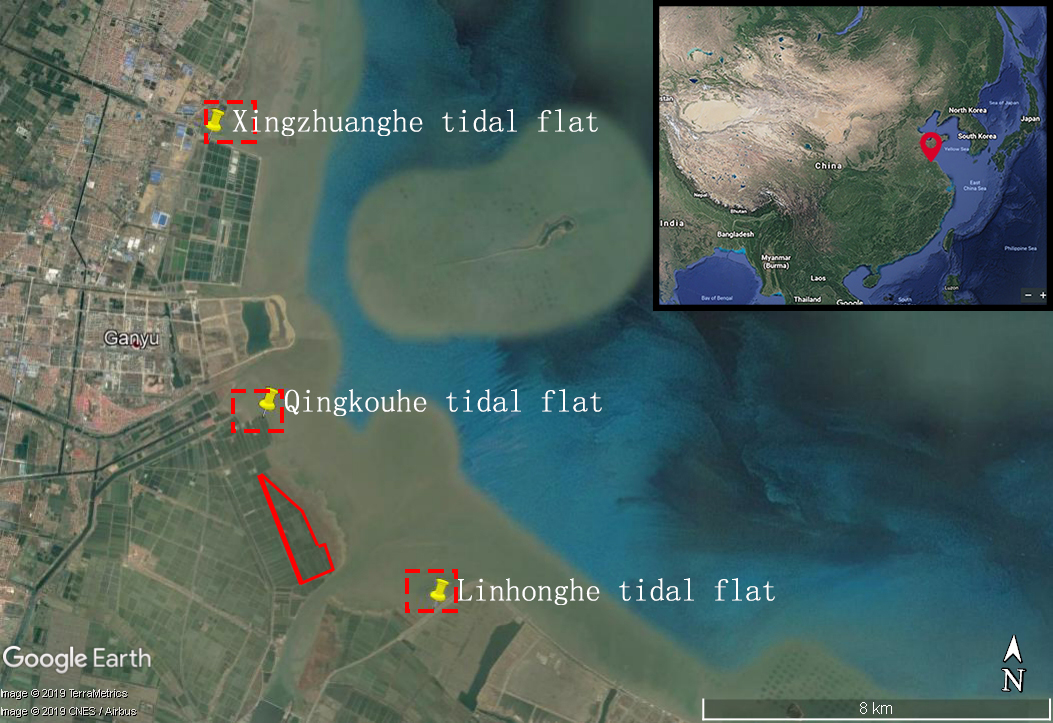 Locations of the major survey sites, as well as the location of Lianyungang on the east China coast (inset map). Solid lines and dashed lines represent the area of tidal flat and high-tide roost surveyed during May 09-13, 2019. Credit: Google map. 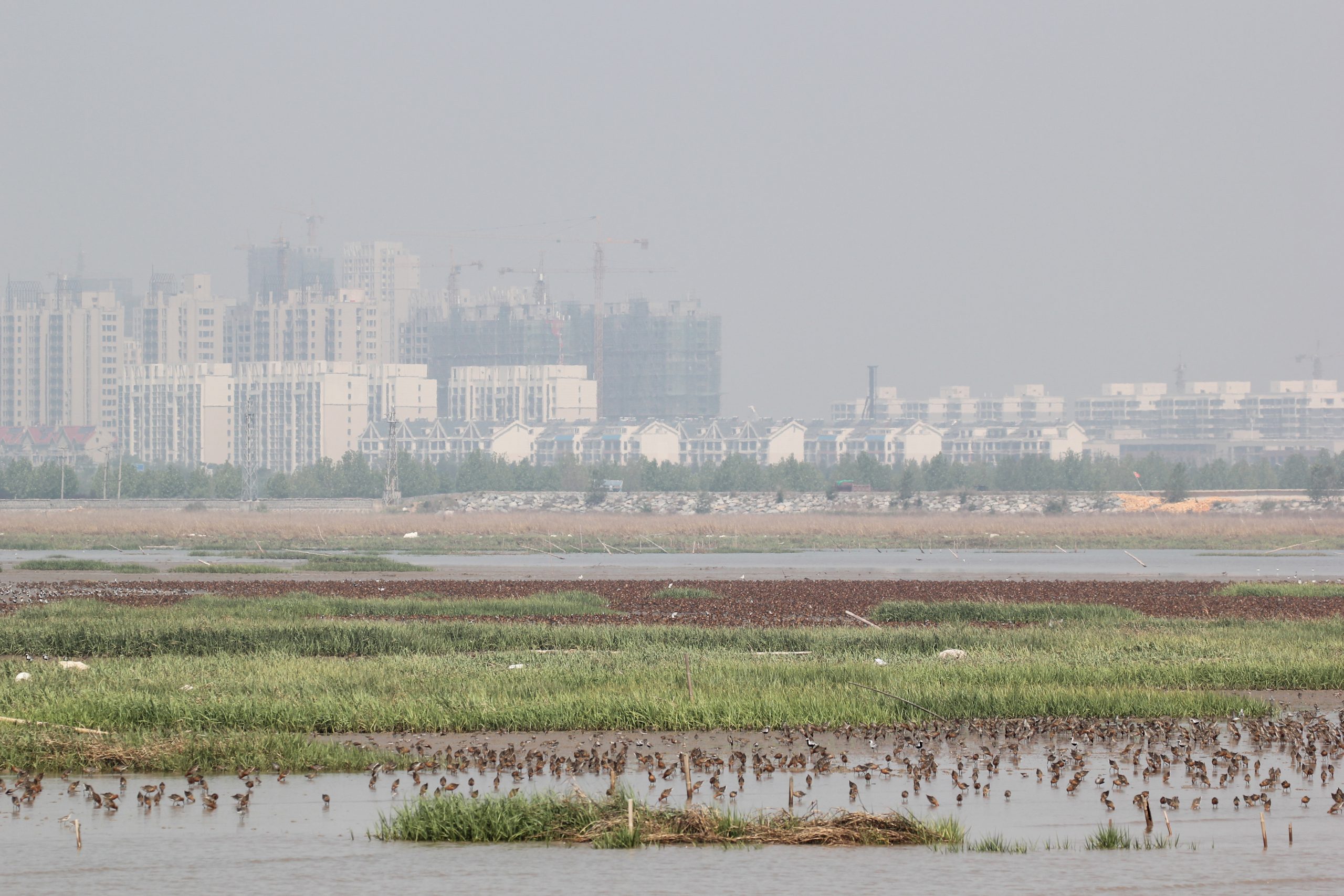 The high concentration of Asian Dowitchers at Qingkouhe tidal flat, Lianyungang on May 12, 2019 © Ziyou Yang.

Over 3,500 Black-tailed Godwits was recorded on the Xingzhuanghe tidal flat on May 10, 2019, which constitutes 2.2% of its estimated global population. During the five-day survey, the surveyors observed 41 individually flagged Black-tailed Godwits, of which 38 were recorded on the Xingzhuanghe tidal flat. Among those flagged individuals, most were only previously observed at Broome, Western Australia, so the survey results filled a gap in the species’ stopover site and migration strategy. 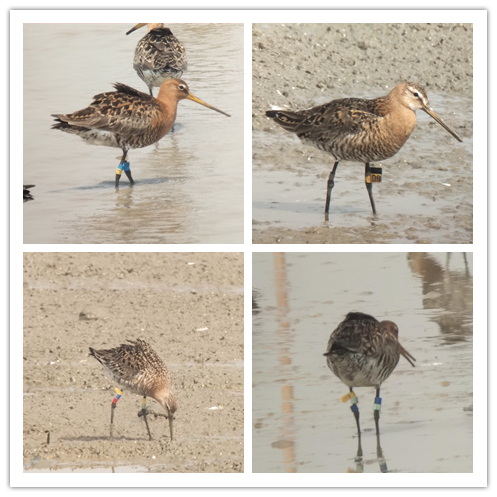 Some of the individually-flagged Black-tailed Godwits recorded on the Xingzhuanghe tidal flat during May 09-13, 2019 © Yongxiang Han.

Several other shorebird species, such as Lesser Sandplovers (15.6% of EAAF population), Sharp-tailed Sandpipers (6.9%) and Broad-billed Sandpipers (5.5%) were also recorded in significant numbers on the Lianyungang coast. More details can be found in the 32nd issue of BirdingAsia. 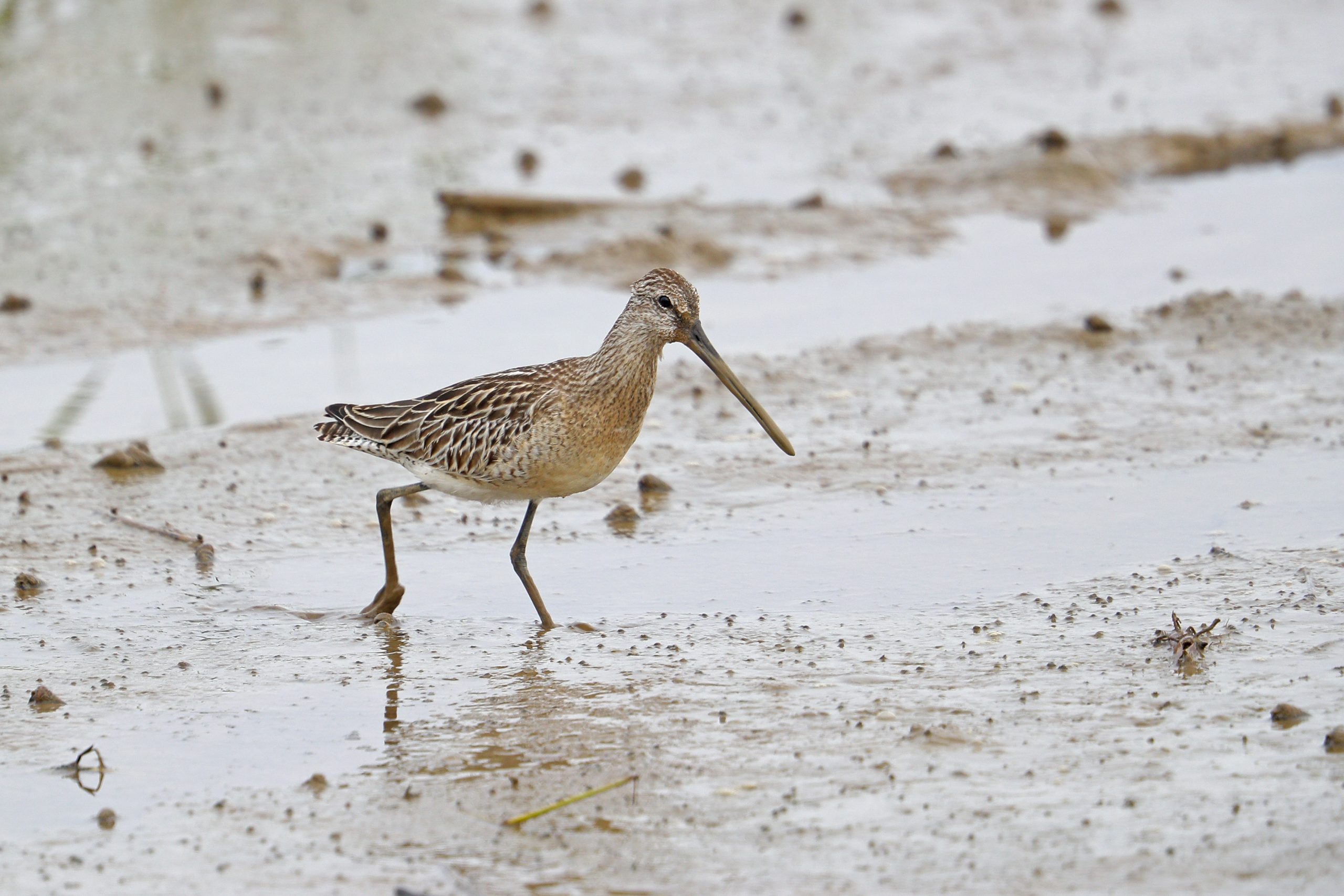 Although Lianyungang does not boast charismatic species like Tiaozini, it does support significant numbers of other shorebirds that are key components of ecosystems along the EAAF. Currently, coastal wetlands on the Lianyungang coast are largely unprotected. Shorebirds still face multiple threats including tourism development, Spartina invasion and lack of suitable high-tide roosts. The indifferent attitude adopted by the local government towards conservation is not helping. 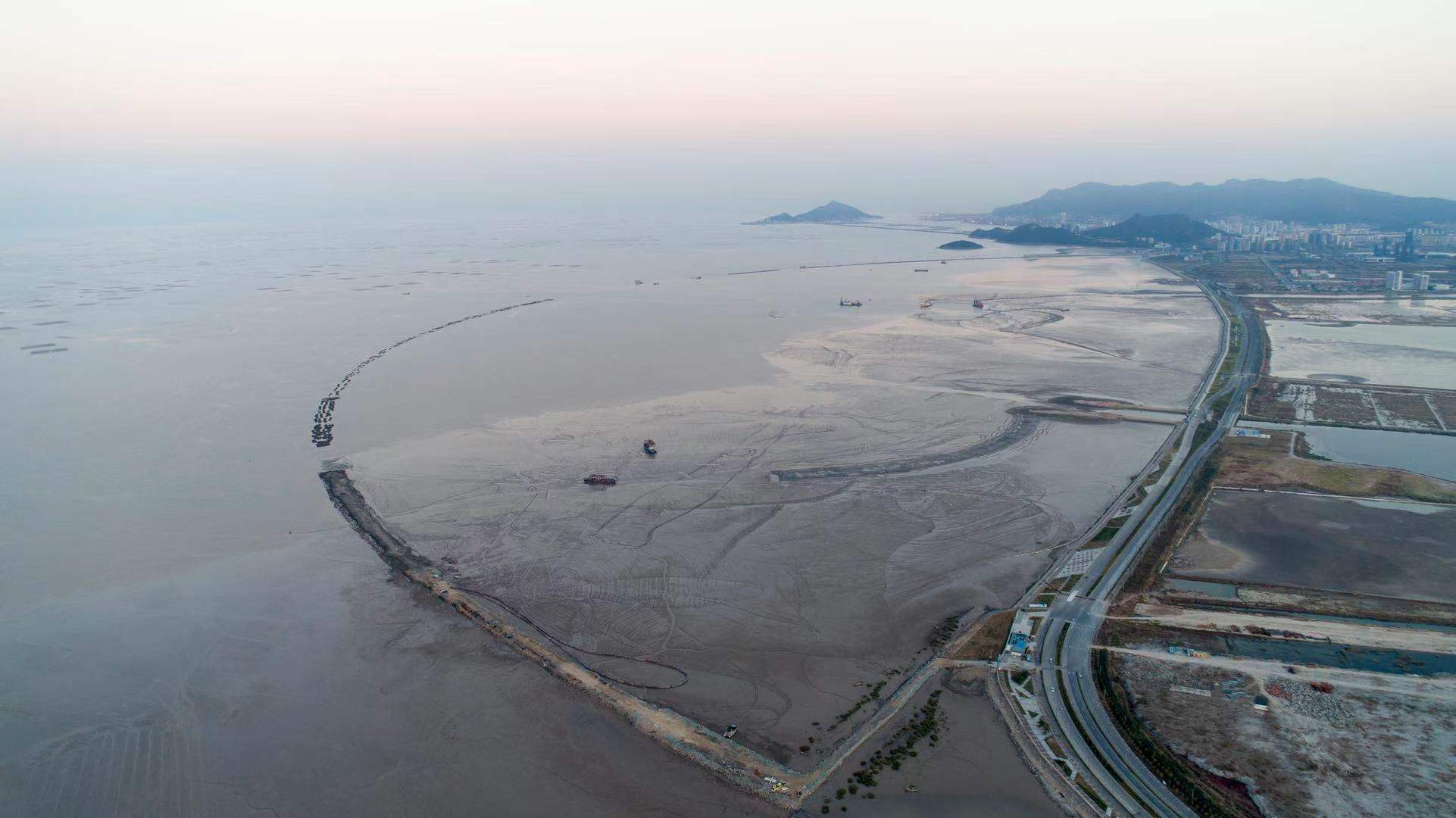 Based on the survey results, SBSinChina recommends that survey efforts should be continued in Lianyungang to inform conservation and management actions. They also suggest that key stakeholders work together to include Lianyungang in phase II of the serial natural World Heritage nomination. Together with other sites along the Yellow Sea-Bohai Bay coast, Lianyungang can provide rich ecosystems to serve both migratory waterbirds and local communities.

Prepared by Yang Ziyou from Spoon-billed Sandpiper in China.