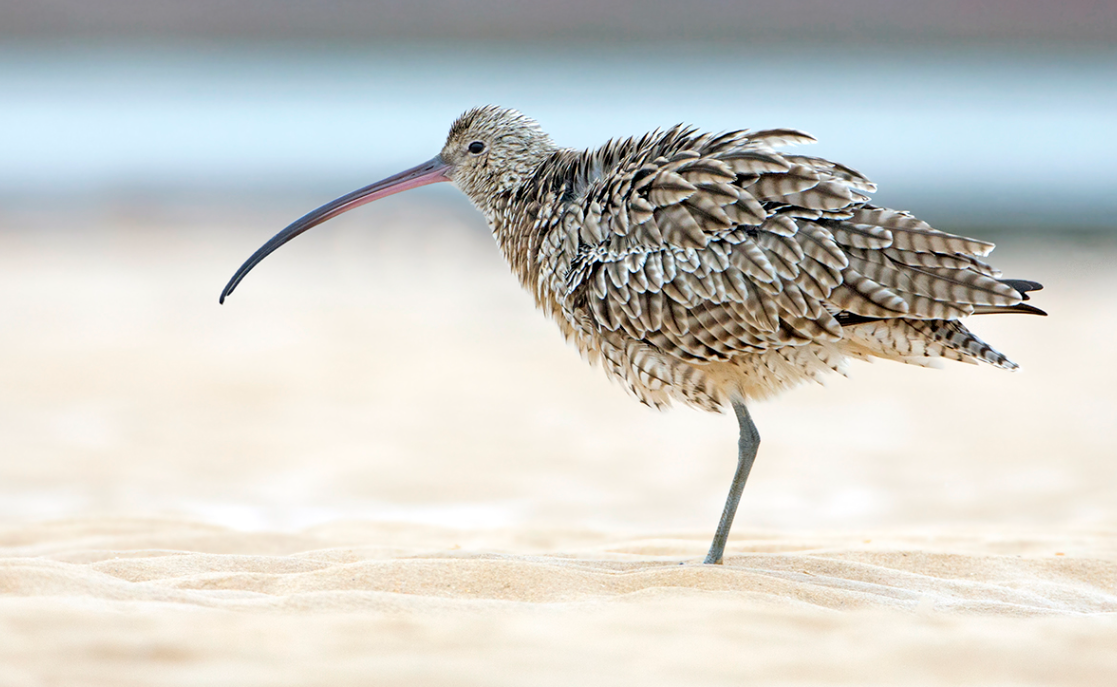 Shoreline habitats for the migrating birds are turned into dry land through a process known as reclamation. © Nick Murray

Birdwatchers have been watching, counting and monitoring shorebirds along the coasts of Australia and New Zealand for many years, resulting, at some sites, in decades-long datasets. Now, these amateur “citizen scientists” have teamed up with researchers to use this long-term information to identify trends in individual species’ populations that reveal a long-suspected critical factor in the decline of long-distance migratory shorebirds, namely their dependence on the Yellow Sea intertidal zones of China and the Korean peninsula as vital stopover and refueling sites.

The study looked at ten species of long-distance migratory shorebirds and evaluated their dependence on Yellow Sea intertidal zones during migration. There was a strong correlation between dependence and decline. As noted by lead author Dr. Colin Studds “The more a species relies on the disappearing Yellow Sea mudflats, the faster it is declining.” The Eastern Curlew migrates from Australia to Russia, where it breeds. The birds stop to refuel in China and Korea along the way. © Dan Weller Bar-tailed godwits from eastern Australia fly all the way to Alaska to breed. They stop to refuel in China and Korea on their way north, but fly non-stop from Alaska to Australia on their journey back south. © Dan Weller

Species highly dependent on Yellow Sea mudflats include Far Eastern Curlew, for which EAAFP has recently constituted a Task Force and developed an international action plan, Curlew Sandpiper, recently listed as critically endangered in Australia, and both Great Knot and Red Knot, which are the species highlighted in EAAFP’s World Migratory Bird Day campaign for 2017.

Almost 30% of the Yellow Sea’s tidal mudflats have disappeared in the 30 years that mark this study’s timescale, largely to coastal development. According to China’s current development plans, more mudflats are scheduled for reclamation. Moreover, remaining mudflats, even in protected areas, are facing threats from pollution, invasive Spartina cordgrass and changing sedimentation patterns, reducing the quantity and quality of food for migratory shorebirds.

It is clear that to save those species passing the non-breeding season in Australia and New Zealand, urgent action is needed to save the Yellow Sea mudflats, a fact recognized by successive resolutions at the World Conservation Congresses in Korea in 2012 and Hawaii in 2016 to protect intertidal mudflats and their migratory waterbirds in the Yellow Sea that passed with overwhelming support.

Associate Professor Richard Fuller of the University of Queensland is clear: “every country along the migration route of these birds must protect habitat and reduce hunting to prevent the birds declining further or even going extinct,” further noting “we are particularly excited that China and Korea have recently begun the process of listing parts of the Yellow Sea as World Heritage Sites.”

Spike Millington, Chief Executive of the East Asian-Australasian Flyway Partnership, cited in the article as the principal multilateral governance framework for migratory waterbird and habitat conservation in the Flyway, observes that “ while this article is important in focusing on long-distance migratory shorebirds from Australia and New Zealand, many other shorebirds, such as the critically endangered Spoon-billed Sandpiper, which only migrates as far south as Myanmar and Bangladesh, also depend on the Yellow Sea mudflats as stopover sites.”

Mr. Millington is optimistic that the corner may have been turned for Yellow Sea conservation, while recognizing that many challenges remain and urgent action is needed. He says “as well as the recent addition of Korean and Chinese Yellow Sea intertidal areas to the World Heritage tentative list, we are also beginning to see the growth of amateur birdwatchers and birdwatching groups in these countries, reflecting the rise of the kind of citizen science that forms the basis of this recent study. Birdwatchers, researchers and government agencies need to work together to harness their efforts for monitoring and conservation of these critical sites.”