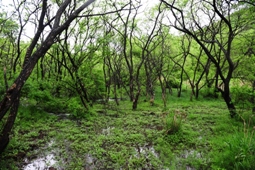 To celebrate the new Ramsar site, Woonkok Wetland in Gochang County, South Korea, a World Wetland Day event was held at the Dolmen Museum in Gochang on 11 May 2011. The event was co-organised by the Ministry of Environment Korea (MoE) and Ministry of Land, Transport and Maritime Affairs (MLTMA), and was hosted by Gochang County. Welcoming speeches were given by the Minister of Environment, Vice-Minister of MLTMA and the Mayor of Gochang County and a Ramsar Site Certificate was presented to a representative of Woonkok Wetland. The 200 participants included the Chief Executive and staff of the EAAFP Secretariat, government officials and local residents. 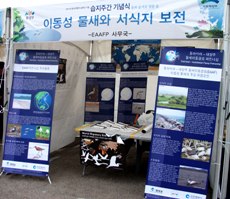 In addtion, there was an EAAFP display to raise public awareness on conservation of migratory waterbirds and their habitats and a CEPA Workshop was conducted with support from MoE. As participants were mainly government officials, many of whom are associated with existing and potential Flyway Network sites in South Korea, it was great chance to create better understanding of the Network in South Korea.