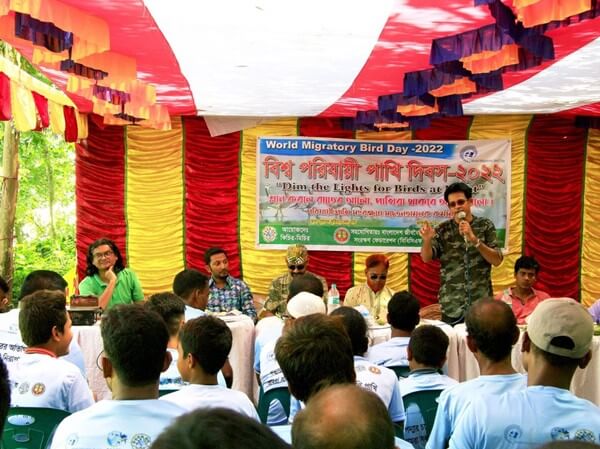 With the aim to contribute towards the conservation of migratory birds and their habitats by mitigating threats caused by the local community along a river-adjacent area of western Bangladesh, through building public awareness, educating local students and teachers and engaging the local youth to birdwatching, this World Migratory Bird Day (October 2022), our NGO, Kichir-Michir, with the help and presence of Bangladesh Biodiversity Conservation Federation (BBCF) and with the support of East Asian Australasian Flyway Partnership (EAAFP) organized a 2-day event in two local communities along Padma river in the districts of Kushtia and Pabna.

The first day, a community discussion program was arranged at Jora Bot Tola, Horipur union, Kushtia. 84 people in total participated in the program, mostly boatmen, fishermen, farmers and grass-cutters. The elected ward councillor and the religious leader (“Imam” of the mosque) were present as the community leader.

The ward councillor promised to help any community people who would report any bird hunting occurrence to him. The religious leader explained from the religious context why migratory birds should be treated well, which will potentially keep a lasting impact on the community with a majority of religious population. T-shirts, pamphlets and food were distributed among the participants.

After the program, a billboard was set up, with the participation of the community leaders and the local people, beside the path used for accessing boats, with the view that it will come into notice to anyone crossing the river towards the important migratory bird habitats.

Another billboard was established at Shilaidaha Ghaat, Pabna. 24 people in the path-adjacent shops were given pamphlets and were motivated to stand against any crossing hunters. 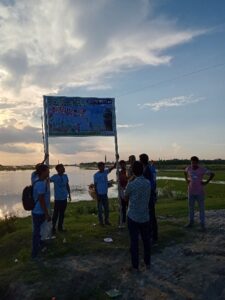 The program was covered in several national newspapers, highlighting the once neglected yet important bird habitats of the region to the people throughout the country.

On the 2nd day, a program was arranged at the Old Kushtia High School, Horipur Union, Kushtia with participation of local students and teachers. The Head teacher, the Union chairman and the District Forest Officer were invited. 165 students participated in the program.

The program was mostly interactive, and the students learnt through a powerpoint presentation and question-answer sessions, games and quizzes we developed in Bengali.

Students were given notebooks with World Migratory Bird Day 2022 theme cover, pamphlets, pens and snack items. A photo frame, designed with migratory bird photos of the area and a thank-giving message, was delivered to the school authority as gift. 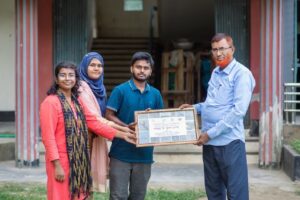 At the school program, we identified 13 students who responded and showed the most interest and invited them for birdwatching at a river-adjacent charland at the bank of the river Padma. We observed large flocks of Gray-headed lapwings, flying Black-headed Ibises, stints and sandpipers among the other species.

Some students showed high enthusiasm to continue birdwatching. They will be followed up to encourage their participation in the future birdwatching programs.