The EAAFP Secretariat is very pleased to announce that Ms. Vivian Fu from Hong Kong has joined on 27 September 2018 as a new EAAFP Communication Officer, replacing Ms. Tomoko Ichikawa. 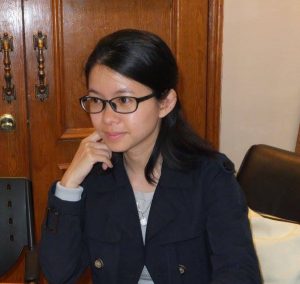 Ms. Vivian Fu used to work for the China Programme of the Hong Kong Bird Watching Society, a partner of BirdLife International based in China (Hong Kong). Vivian is known to some of the Partners as she is one of the members of the EAAFP Spoon-billed Sandpiper Task Force and actively involved and collaborated with people from other places in the Flyway.

Vivian has a background in Ecology in her bachelor’s degree and focused freshwater ecology for her Mphil studies at the University of Hong Kong. She is also a holder of Master of Social Science at HKU. Since her joining to the Hong Kong Bird Watching Society/BirdLife International China Programme in 2010, she has initiated, coordinated and participated in conservation projects on specific globally threatened species in mainland China: Spoon-billed Sandpiper, Blue-crowned Laughingthrush, Chinese Crested Tern, Yellow-breasted Bunting and Jankowski’s Bunting. She is also one of the core coordinators of the Citizen Science Programme China Coastal Waterbird Census.

During the seven-years practice on conservation, her experience on awareness-raising work revealed that education is a crucial element for conservation, the results allows long-term conservation work to be more effective. Since 2012, she developed innovative approaches in awareness-raising activities such as a short animation and a cross/inter-country postcard exchange project about Spoon-billed Sandpiper, involving kids from 8 countries of the bird’s migratory route. In 2014, she implemented a participatory project in South China to tackle the problem of illegal hunting. These projects were mostly partnering with local civil societies and engaging government agencies.

All these experiences made Vivian wanting to devote more to environmental education and awareness raising for conservation. She is keen to learn and explore ways to communicate and deliver messages of the importance of birds and flyway to different target audiences along the East Asian – Australasian Flyway.