The largest wintering population was found in Taiwan with a figure of 2,060 individuals, accounting 61% of the world population, which was 26 individuals (equivalent to 1.3%) more than the 2,034 individuals recorded in 2015. The numbers recorded in South Korea, Japan, Taiwan, mainland China and Macau increased, while those in Deep Bay (Shenzhen and Hong Kong) and Vietnam decreased.

Numbers of Black-faced Spoonbills recorded in different areas are as follows:

Several highlights are indicated below:

The Society would like to take this opportunity to thank all regional organizations and volunteers for their participation in the census, contributing to the smooth conduct of this census throughout all years and therefore better conservation of Black-faced Spoonbill in the region. 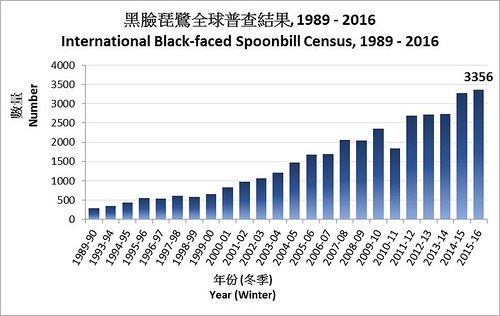