By Zhang Chun on Chinadialogue 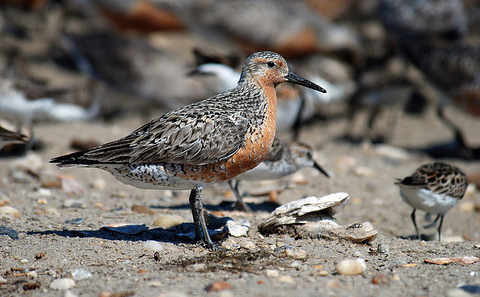 The Red Knot is one of the species most at risk from a rapid decline in the coverage of China’s wetlands /Image by Gregory Breese(USFWS) ?Chinadialogue

The destruction of China’s wetlands, which are critical stopping points for birds migrating as far away as the Arctic or the South Pacific, threatens mass extinctions of species across East Asia, new research has found.

Besides providing shelter and breeding grounds for birds and other wildlife, wetlands provide crucial supplies of fresh water and act as a barrier against storm surges and tidal flooding, events that are expected to become increasingly common because of climate change.

The report makes recommendations, based on survey outcomes, for 180 key reserves along the coast, including the 11 most important habitats for migratory birds, and calls upon the government to protect these immediately.

“I can’t say I feel confident, but the door to saving these wetlands is not yet closed and we have to seize this opportunity,” said Spike Millington, chief executive of the East Asian–Australasian Flyway Partnership, which contributed to the report.

The report calls for the creation of a ‘wetlands law’ that would make officials responsible for decisions on these types of area even after they have left their posts or retired. The report also proposes:

These measures could help alleviate many of the factors that have contributed to the destruction of wetlands, such as disjointed and confusing management created by overlapping government ministries with conflicting priorities. More importantly, conservation of the wetlands has not been well integrated into economic development plans and performance evaluation of local government officials, the report added.

“As a result, protection of important natural capital such as wetlands is often lost to short-term economic gains,” the report said. It added that greater effort would enhance moves by China’s leadership to enshrine environmental protection in most areas of decision-making through its “Ecological Civilisation” programme.

Because so many of China’s wetlands have been destroyed, there are long-term threats to species, such as the Red Knot, which flies north over the Bohai Sea in spring. Around 80% of the Red Knot’s population stops at one site, the Luannan wetlands in Hebei, where it rests and feeds for a month.

But only 12 kilometres of that wetland remains. It is under threat from further land reclamation, and the local government have yet to take tough measures that would give strong protection to what is left. “In March this year Hebei agreed that this was an important wetland, but it hasn’t yet been given any real protection,” Professor Zhang Zhengwang of Beijing Normal University, told chinadialogue.

Around 60% of China’s 18,000 kilometres of coastline has been altered to reclaim land or build seawalls, with disastrous consequences for wildlife, biodiversity and conservation efforts, the report estimates.

Half of the 10 most important wetlands on the Pacific-East Asia route are in China, with Poyang Lake in Jiangxi the most crucial. When setting off south in autumn some birds fly direct to Australia or New Zealand, but on the arduous return trip north the vast majority will feed and rest in China’s wetlands. If these habitats are destroyed, they cannot feed properly and will be unable to continue.

Every year, 50 million birds of 492 different species migrate along this path, with 246 species stopping in China. Lei Guangchun, head of the Nature Reserve College at Beijing Forestry University, said that populations of over half those species are falling, and at least 27 of those are endangered – representing almost half of all the world’s endangered aquatic birds classified as being under threat.

Since the 1950s, China’s coast has lost over half of its temperate wetlands, almost three quarters of its mangrove forests and around 80% of its coral reefs – all habitats important for migratory birds. China’s environmentally-damaging plans to reclaim land continue unabated, however. With 246,900 hectares of land planned to be taken back from the sea by 2020, China’s aim of maintaining 800 million mu (53.6 million hectares) of wetlands won’t be met.

The loss of wetlands has accelerated as China’s economy has grown. Between 2003 and 2013 wetlands shrank 23%, a trend exacerbated by weak government oversight. According to the report, 69 out of 140 wetlands on the migratory route are unprotected.

Protection in developed areas, such as Tianjin, Zhejiang, Jiangsu and Shandong, is particularly low – partly due to demand for new land and inadequate polices.

But Lei Guangchun said that setting up reserves is not enough to prevent environmental degradation. He told chinadialogue that “the past century have seen tens of thousands of reserves set up. But biodiversity is still falling. What we need to do is coordinate development of humankind and society.”