Brent Geese Branta bernicla breed widely along the coastal line of Arctic Ocean in Eurasia, Alaska, Canada and also in Greenland. The estimated global population is about 500,000 birds. The Asian population of Brent Goose B.b.nigricans is estimated to be 6,000 to 10,000 birds, wintering in Japan, China and Korea. Although the breeding areas are thought to be on the lower Lena and Yana rivers, the migration route and wintering status of Asian population are poorly studied. Moreover it is suggested that the rapid development in the coastal areas where Brent Goose winters could impact on the wintering status of the Asian population.

Because of this situation, Japanese ornithologists and NGOs have conducted research, including satellite tracking, nationwide surveys during migratory and wintering periods, and banding surveys in the breeding grounds in Russia. In this report, we review these outcomes and also call for Partners, Working Groups and other relevant organizations to join the cooperative count survey and report observation record of banded Brent Goose.

Although over 35,000 Brent Geese were banded in Alaska from 1986 to 1994, only 7 birds of these were subsequently recorded in Japan (Derksen et al. 1996. Fig.1). Most of them wintered in California with only a few birds migrating to East Asia.

On the other hand, 22 birds were banded around Olenyok River in Siberia in 1997 (Syroechkovskiy 1998) and 1 of these was later recorded in Hokkaido, Japan (Ikeuchi unpublished data). Furthermore Shimada et al. (2016) banded 9 birds and attached PPT to 5 of them in Miyagi, Japan in 2014. One of these birds migrated to the northern coastal area of the Sea of Okhotsk in spring migration 2014, and another bird was killed by hunters in Neelova Bay around Lena river mouth in June 2015 (Shimada unpublished data).

These records suggest that the main breeding area of the Asian wintering population may be the lower Lena and Yana Rivers, as Syroechkovskiy pointed out. 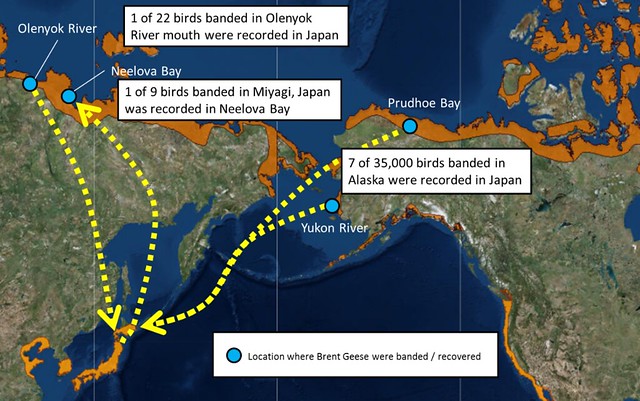 It is well-known that Notsuke-hanto and Notsuke-wan [EAAF 116] is the most important staging site in Japan in autumn migration, but there is generally little information about the wintering status in Japan and other parts of East Asia. To study the distribution and migration of Brent Goose in East Asia, the East Hokkaido Brent Geese Network (EHBGN) was established in 2014. EHBGN regularly conducts nationwide surveys in Japan (including Kunashiri Island) in autumn (November), winter (January) and spring (April). In the 2015/2016 season, the survey was conducted at a total of 33 sites and 8,602 birds were observed in autumn mainly around Notsuke-hanto and Notsuke-wan, 887 birds were counted in winter, and 2,705 birds were observed in spring (table 1. See also “Nationwide goose counts in Japan”).

Table 1. Result of nationwide survey in Japan (* the result might be underestimated because some study sites were not covered) 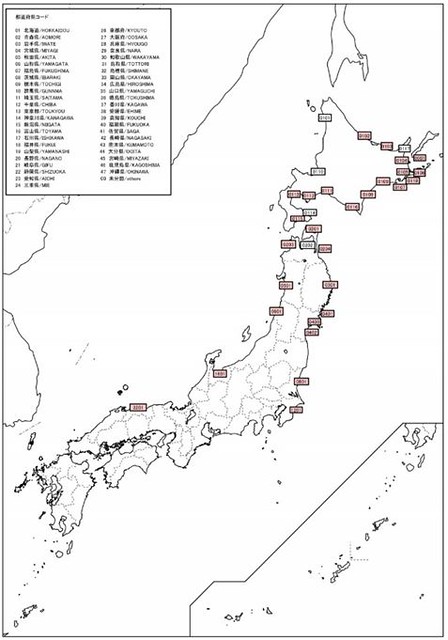 These results suggest that there might be unknown major wintering areas somewhere in Japan. Alternatively, most birds may move from Hokkaido to the Republic of Korea, China and the Russian Maritime Provinces in winter (Fig. 3). Therefore cooperative surveys throughout East Asia region are essential for better understanding of wintering status and connectivity between wintering and staging sites. 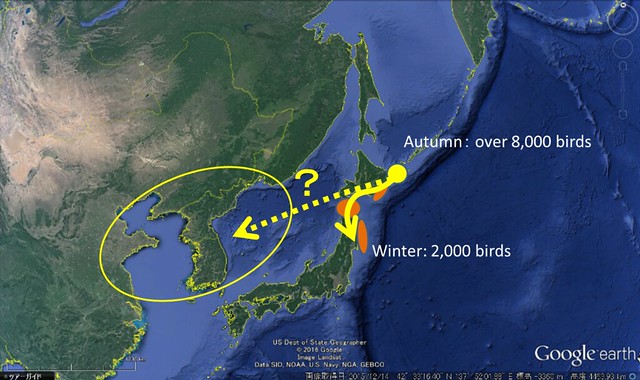 As another approach to study the wintering status and migration of Asian Brent Goose, banding research was conducted from June to July, 2016 in the Lena Delta [EAAF037] which is assumed to be the breeding area of Asian Brent Goose. During this expedition, a total of 21 female Brent Geese were banded with yellow plastic rings with two numbers (Fig. 4). And a total of 31 shorebirds of 6 species and 1 Herring Gull Larus vegae were also banded with red colored rings (Table 2, Fig. 5 and 6). 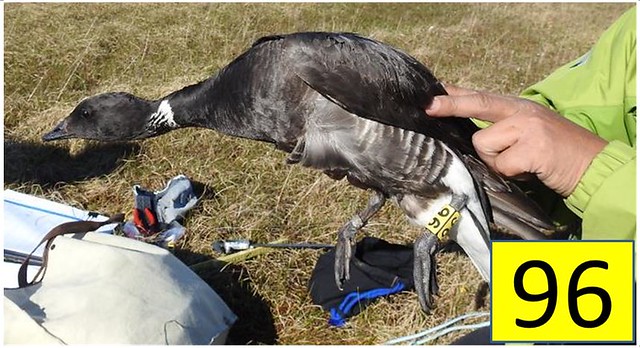 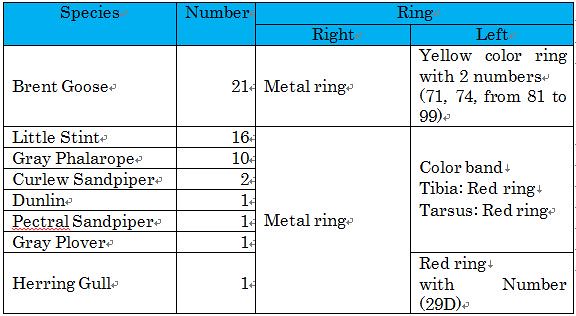 Please contact below if you would like to join the cooperative count research or report a banded Brent Goose.