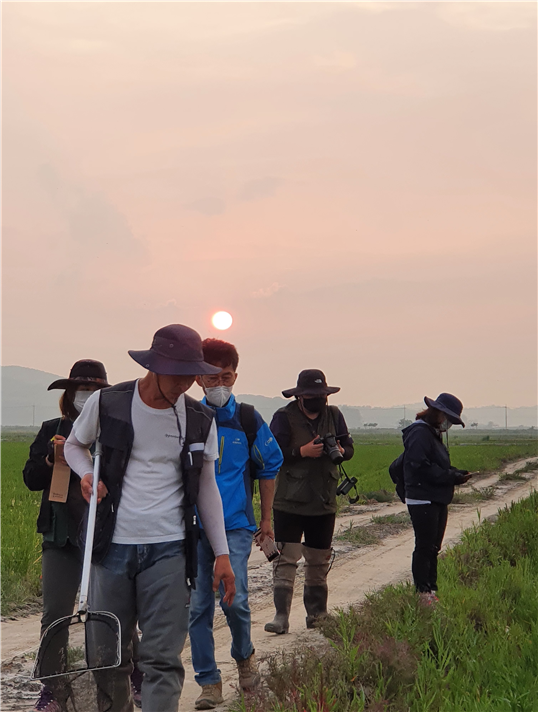 The Hwaseong Wetlands are a vital stopover site of the East Asian-Australasian Flyway (EAAF) and a repository of biodiversity. In 2018, it was listed as the EAAFP Flyway Network Site (FNS), and its value was internationally recognized. To promote the importance of the Hwaseong Wetlands and to conserve wetlands in the hands of the local people, the EAAFP Secretariat and the Korean Federation of Environmental Movement–Hwaseong (KFEM Hwaseong) implemented the Local Residents Project for Conservation of the Hwaseong Wetlands from April to December 2021.

In 2021, the Citizens’ Ecological Survey counted waterbirds of 71 species (September 6, 49 species 9,200 / October 4, 52 species 7,500). The survey on the breeding site of waterbirds was conducted on Nong-Island in Maehyang-ri; Eurasian oystercatcher 3 nests and 10 eggs, as well as Kentish Plover, black-tailed gull, and herring gull nests (May 18th).

Through the activities of the Citizens’ Ecological Survey Group, citizens were able to research the ecological values of the region and recorded basic data with experts, learned the importance of preserving biodiversity, and went through training programs to become resident activists.

The Youth at Durae Natural High School near the Hwaseong Wetlands and instructors working in the region formed a small group (Dingo Club) together and conducted 5 times of indoor and field education activities regarding the Hwseong Wetlands.

Hwaseong citizens participated in a birdwatching event with their families. Due to the spread of COVID-19, the number of people was limited to 15, and they were divided into groups of five to birdwatch so as not to interfere with the waterbirds.

Education on mobility waterbirds was also conducted while directly observing Black-faced Spoonbill and Eastern curlew in the Hwaseong Wetlands.

Through the Marine litter purification activities at Maehyang-ri tidal flat implemented along with residents and citizens, we understood the severe damage to marine life caused by marine wastes.

A civic forum was held with wetland NGOs, experts, and residents, titled ‘Benefits of the Hwaseong Wetlands, Shared with Together.’ Through the Forum, it was an opportunity to resolve conflicts over wetland development & conservation, seek new directions for reclaimed land in the Hwaseong Wetlands, and emphasize the importance of the Hwaseong Wetlands in and outside Hwaseong City. Due to the COVID-19 social distancing policy, it was broadcasted live on YouTube, with a maximum of 38 people offline and 333 views online.

– For wetland conservation, not publicity and persuasion but regional communication is needed to resolve conflicts over development and conservation.

– To restore Suncheonman Bay, damaged by tourists, various indicators are investigated and diagnosed based on data. Establish regional governance to reach a consensus.

– The fund is raised through admission fees, etc., and the budget for wetland management is provided to residents through ordinances.

– We need to create ecological programs that benefit the local economy.

– Case introduction: Conservation of wetlands by fishing activities with the inland wetland fish farm in Maipo, Hong Kong. Waterbirds as a tourist resource.

– Discussions on how to use wetlands wisely should continue.

* Discussion: Wise Use and Conservation of the Hwaseong Wetlands

– Jeong Ki-yong (Hwaseong KFEM): On July 20, 2021, Maehyang-ri tidal flat wetland protection area was designated. The inside of the Hwaseong Wetlands should also be protected as a buffer zone for wetland management.

The National Institute of Ecology found 26 endangered species. The expansion of protected areas is essential for biodiversity conservation.

– Kim Gap-gon (Gyeonggi Bay Forum): The Hwaseong Lake Waterway must be restored to a tidal flat by connecting it to the sea. Local farmers and fishermen must participate in tidal flat conservation management.

– Choi Jin-cheol (Hwaseong Wetland Fisherman): Some fishermen have waited for 30 years to sell reclaimed land. Wetland conservation is also necessary, but local fishermen and farmers should not be harmed. The government, Hwaseong-si, and civic groups should actively listen to the opinions of residents.

In solidarity with 17 civil society organizations working in Suwon and Hwaseong, they prepared a Hwaseong Wetland Citizens’ Walking Contest and civic culture performance.

About 20 local activists participated as hosts, and about 120 Hwaseong and Suwon citizens’ families applied. Walking along the 5km section of the Hwaseong seawall, citizens toured the Hwaseong Wetlands, where numerous lives are alive and breathing, and shared the meaning of peace by listening to the story of the village suffering from 54 years of combat airfield at Maehyang-ri History Hall. Watching cultural performances prepared by citizens themselves, the participants ended the event by shouting, “Expansion of the Hwaseong Wetlands Protection Area!”, “Designation of Ramsar Wetlands!!”, and “Registered as a UNESCO World Natural Heritage Site!!!”