Eaaflyway > All News > Community Support Project 2020 – Honest Stories of Local People and Citizens Joining Together: ‘How can We Maintain the Benefits from the Hwaseong Wetlands?’ 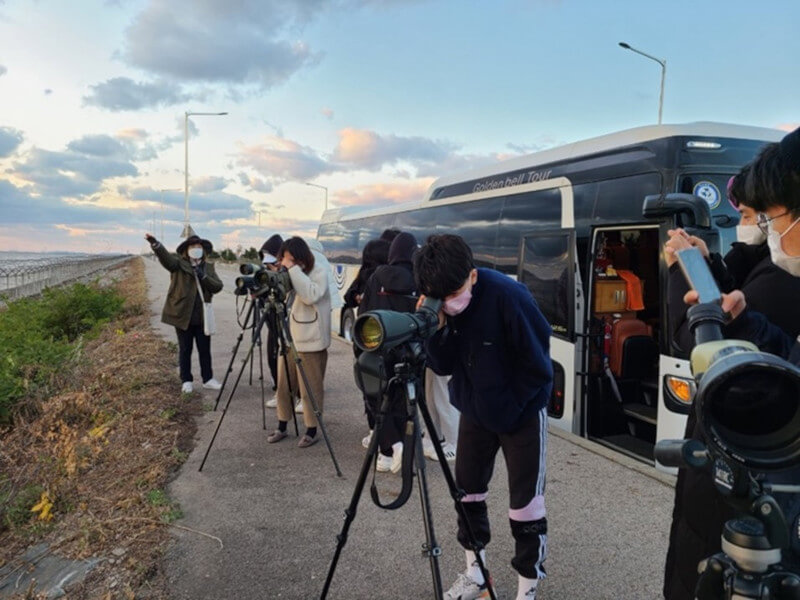 From March to May 2020, it gets busy at the Hwaseong Wetlands. During this period, flocks of shorebirds flying over the Pacific Ocean from Australia and New Zealand arrive. Along with Summer migratory waterbirds such as Black-faced Spoonbills and Egrets coming from the west coast for breeding, winter birds, including Bean Geese and ducks not yet left to the north, are spotted resting all over the mudflats and wetlands. Citizens, bird watchers, and photographers visit the Hwaseong Wetlands to watch these diverse migratory waterbirds. Over the past three years, the value of the Hwaseong Wetlands has become well understood by the experts and wetland-related NGO activists in and out of Ro Korea by holding annual International Symposiums to protect the internationally endangered species that visit the Wetlands. This was possible through tremendous work from Hwaseong City, the East Asian-Australasian Flyway Partnership (EAAFP) Secretariat, the Korean Federation for Environmental Movements (KFEM), Birds Korea, and local civil society organizations, organizing various events and promotions to conserve the Hwaseong Wetlands.

In 2020, a local project was conducted to find ways for residents, fishermen, and Hwaseong citizens along the Wetlands to recognize its importance and special value and conserve ecological excellence beyond promotion. Through local meetings, forums, campaigns, and lectures organized by KFEM Hwaseong, various views and stories of the citizens about the conservation of Hwaseong Wetlands were recorded and archived as well. ‘The future of the Hwaseong Wetlands’ was envisioned through the engagement of the fishermen and farmers living along the Wetlands, local students and urban citizens, ecotourism guides, and city council members.

The Hwaseong Wetlands were a mudflat formerly called the Namyang Bay, which was mostly reclaimed and became an inland area due to the project of the Hwaong District in 1991. Fishing is being continued around the Maehyang-ri Mudflats currently. Still, most fishing villages and communities have renounced fishing rather than making a living from agriculture or seeking other occupations. The Korea Rural Community Corporation (KRCC) promised to compensate and sell farmland to the displaced fishermen after the construction under the terms of consultation on the reclamation project, having them keep waiting for the promise for 30 years. The displaced fishermen who lost sea and mudflats claimed that before the Hwaseong Seawall blocked the sea, Gould’s Razor Shells and manila clams were common, and even swimming crabs were used as fertilizer. Their income was higher than that of large companies (about 50 million won/ year). Furthermore, they asserted that the KRCC should keep the promise of compensation with the farmlands. It was also suggested that the agricultural land should be made to produce food and create a form of a farming complex, but the rest of the areas of the Hwaseong Wetlands should be conserved. During the forum, a participant from Organic Farmers Korea argued, “Eco-friendly agriculture plays a leading role in focusing on biodiversity and mitigating the climate crisis. More of this is a good opportunity to increase the number of young farmers. The local economy will be revitalized if production complexes are made and connected around the farmlands.”

Among the Fishing Villages of Fisheries Cooperative of South Gyeonggi Province, Hwaseong City has the largest number of fishing products and fishermen. Today, most rely on aqua culturing, while the natural sea products and the producer’s income based on those have decreased. While the fishermen agreed upon the need to protect and conserve the sea, they suggested the improvement of the facilities for leisure-based tourism, accommodations, and experiencing activities for their livelihood. Some believed the Hwaseong Seawall should be removed and the sea back again. In contrast, others argued the need for further discussion on the re-naturalization of agricultural lands that have been created already. Above all, there was a unanimous agreement on having the sea back again by enabling the overall flow of seawater at the Hwaseong Wetlands. However, a sense of misunderstanding and distrust remained about the designation of Wetland Protected Areas (WPAs), assuming that it could hinder the development of fishing, experience villages, and regional development. Through the designation of WPAs, organizing a public forum and a regional consultative body were proposed to encourage sustainable communication between residents, providing sufficient explanations and discussions regarding the incentives and support for residents.

What thoughts and opinions do urban citizens have about the Hwaseong Wetlands? Residents from Dongtan hoped that the Hwaseong Wetlands become blue carbon storage against the climate change crisis and an ecological academic hub providing bird hides, walking trails, local festivals, and international wetland centers. Also, they suggested that it should be well-conserved for its enriched biodiversity. Once the Hwaseong Wetlands are inscribed as a Ramsar Site, it will create a sense of pride and improve the city’s value as an ecological city as a Hwaseong residence. However, there is still a concern that the Wetlands should be managed carefully not to exclude the residents. 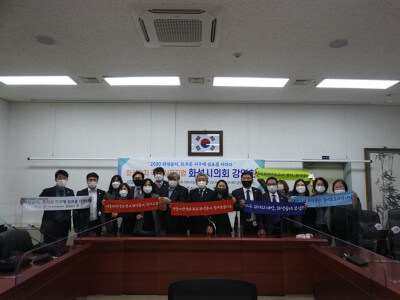 Along with 15 youth club members of Dure Natural High School and 15 members of the Dongtan Youth Environmental Club located near the Hwaseong Wetlands, education and field experience activities at the Hwaseong Wetlands were made to observe diverse species such as birds and wild animals. The benefits of the wetlands to the youth were discussed, and research on international organizations which conserve migratory waterbirds was also conducted by drawing the species that visit the Hwaseong Wetlands. By producing the video of the club’s activities and making the presentation at the International Symposium, local youths had opportunities to participate in environmental activities for wetland conservation.

An ecological research team consisting of university students and citizens learned surveying methods for migratory waterbirds and received basic education regarding the waterbirds’ habitat environment in the Hwaseong Wetlands, which sought to develop a proper birdwatching culture by conducting research activities that involve citizens and college students based on the location. Since December, surveys on wildlife, including migratory waterbirds in Hwaseong, have been conducted, discovering Eurasian Otters (EN/class 1) and Leopard Cats (EN/class 2) with unmanned cameras. Video clips of wild animals living in the Hwaseong Lake were produced and promoted on the website and Facebook of KFEM Hwaseong. 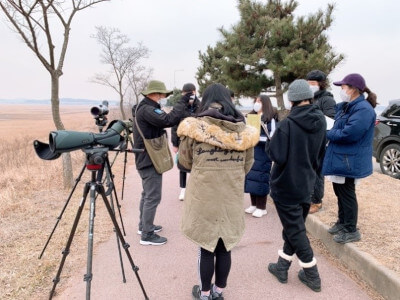 Dr. Nial Moores from Birds Korea gave a lecture to the more than 30 guides for ecotourism and ecological education regarding the importance and ecological value of the Hwaseong Wetlands by providing an example of Far Eastern Curlew’s life cycle. Following the lecture, each group discussed and presented ten rules for tourists of the Hwaseong Wetlands and a two-day tour course program for foreign tourists. Being quiet, keeping distance from birds, and limiting the number of people were presented as rules. In addition, programs that combine culture and nature through meditating, walking, birdwatching, and local food experiences were suggested. 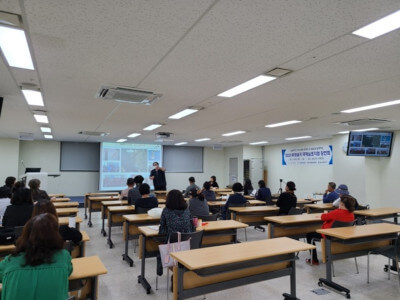 Through the campaign activities to raise the awareness of the severity of marine waste problems along with the youth, students described the mudflats covered with trash, citing Charlie Chaplin’s words, “life is a tragedy when seen in close-up, but a comedy in long-shot.” Promotional materials containing the information on the designation of WPAs were distributed to residents in each village, and street campaigns were conducted towards the citizens in Bongdam and Hyangnam to introduce the Hwaseong Wetlands and receive their signatures for supporting the WPA designation process. 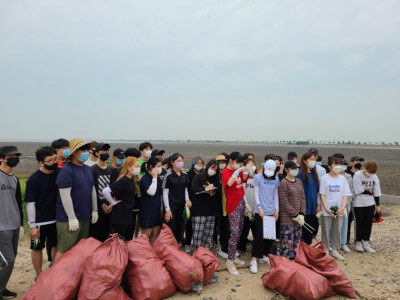 There were many difficulties in holding face-to-face events due to Covid- 19 pandemic. Although the activities to meet residents and citizens were not actively carried out, sincere opinions could be shared through small-scale meetings and forums. The Hwaseong Wetlands have already lost most of the mudflats. However, with the newly created artificial wetlands, nature is giving humans another chance to protect diverse wildlife. We have experienced irreversible damage due to the reclamation project. There is a growing sense of citizenship that people can only survive by protecting nature from reckless development. The Hwaseong Wetlands is an asset to all residents, including fishermen, farmers, and citizens. Now, we are seeking ways to use and conserve the Wetlands wisely by collecting diverse opinions in the region.

The best way to conserve the internationally endangered migratory waterbird species is to foster the residents and citizens with a righteous ecological philosophy and support the process of creating an ecological culture through conserving the Hwaseong Wetlands. Hwaseong Wetlands, the great resting area of Far Eastern Curlew, will be able to protect only when activities that people and nature are continued to be connected through wetlands.