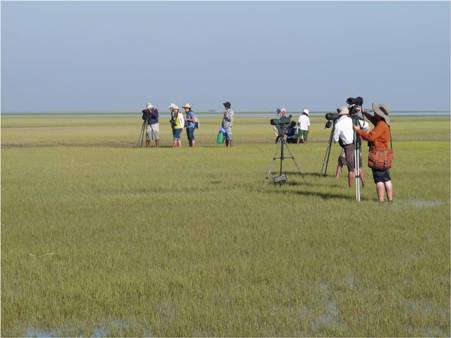 Conservationists from ArcCona, BTO, RSPB and WWT from the UK joined the BirdLife partner in Myanmar, BANCA for a training workshop and survey of Spoon-billed Sandpiper in the Gulf of Martaban (Mottama). The field survey as well as a training course was accompanied by members of the SBS Task Force from Japan, Bangladesh and China, who shared their knowledge and experience with the survey team. The team of 12 scientists had over 100 sightings of Spoon-billed Sandpipers during the four days of surveys of their prime habitat in the upper estuary. In February another team of British scientists repeated the survey with similar results. A full analyses of the count data is needed before to be certain, but first indications give hope that the work already done by BANCA to reduce hunting may be having a positive affect. A Japanese – Burmese Benthos team took soil samples for analyses of potential food items of the Spoon-billed Sandpiper. In addition, 4-8 birds have been observed at Ahlat at the Salween River mouth in the south of the Gulf which confirms that this area is also an important wintering area.

The most positive news comes from separate field surveys at Nan Thar in the Arakhan region, where a total of 25 SBS were observed on 20 January compared to 22 the year before and only 14 the year before that. This increase follows the cessation of hunting following the Task Forces’ intervention three years ago and the start of ecotourism in the area to supplement livelihoods of the local people. It is fortunate that BANCA together with Bird Holidays is offering tours to visit this beautiful little island next winter again. People who join the tour will not only see Spoon-billed sandpiper in winter, the globally endangered Nordmann’s Greenshank and roosting Bar-headed Geese amongst many others; they will actively support the local community by their visit, who stopped the hunting of birds on the island.

These results are encouraging, demonstrating that early interventions and the mitigation work on the hunting issue have shown affect. Even more encouraging has been the workshop on World Wetland Day (2 Feb.) in Nay Pyi Daw, the Myanmar capital, hosted by the Ministry of Environmental Conservation and Forestry on behalf of the Ramsar designation of the Gulf of Martaban and other sites important for the Spoon-billed sandpiper. Several members of the Task Force and BANCA presented and highlighted the importance of the Gulf of Martaban and the ministry outlined a roadmap for protection. Further meetings and close cooperation between BANCA and the ministry are planned to increase the number of Ramsar sites and protected area coverage, including other coastal sites, such as Nan Thar Island.