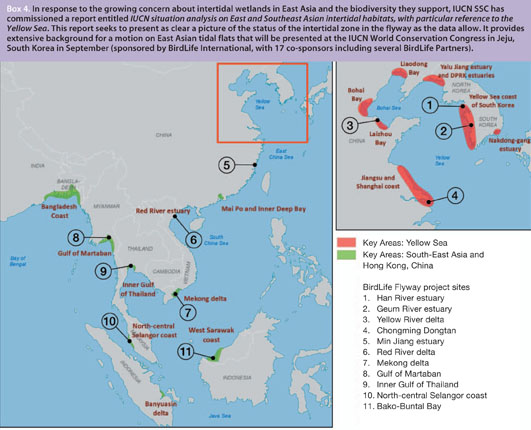 The candidate list of sites for BirdLife’s new flyway project in Asia which is included to 16 key areas, identified by The IUCN Situation Analysis. © WorldBirdwatch – June 2012, BirdLife International.

Rio Tinto recently joined the East Asian – Australasian Flyway Partnership (EAAFP) and established a project in collaboration with BirdLife International and Wetlands International, both EAAFP Partners in 2011. The project planning meetings were held in Thailand and South Korea in February 2012 to consider how to make the most effective use of the new resources available, to build upon the on-going activities both at selected sites and at the flyway level. During these meetings, 11 sites in South Korea, China, Vietnam, Thailand, Malaysia and Myanmar were chosen for inclusion in the project, because they are both of critical importance for migratory waterbirds (as confirmed by the IUCN situation analysis) and also places where BirdLife organisations have the capacity to implement conservation activities. The project will be implemented by the BirdLife Asia Partnership and aims to take conservation action at intertidal wetlands that are critical for migrating waders, to improve the availability of data on the bird population that use the flyway, and to raise awareness throughout the region of the threats to migratory birds and the value of coastal wetlands to people.

One of the key activities at the project sites will be to mobilise local communities for the protection and management of wetland habitats. This will be done by establishing and building the capacity of Local Conservation Groups (LCGs), site-based groups of local stakeholders, often comprising volunteers, which will support the efforts of protected area managers and local government agencies. LCGs have already been established at some project sites in Malaysia, Thailand and Vietnam. For example, the LCG at Bako-Buntal Bay in Malaysia includes restaurant owners and tour operators, village committee representatives and members of the Malaysian Nature Society’s Kuching branch, who work together towards better management of the bay for wildlife and livelihoods. The Flyways project will help guide the activities of the LCGs at the project sites where they have already been established, and will set up new LCGs at the other sites.