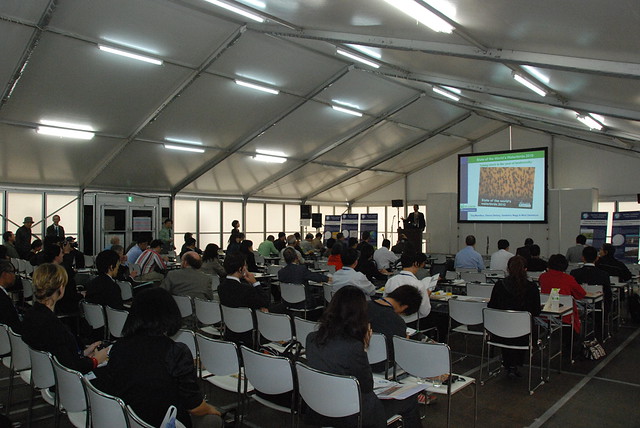 10th Conference of the Parties of the CBD in Nagoya, Japan © EAAFP Secretariat

At the Tenth Conference of the Parties of the Convention on Biological Diversity (CBD) in Nagoya, Japan, government parties agreed on a process for describing Ecologically and Biologically Significant Marine Areas (EBSAs) to notify the UN General Assembly (UNGA) of the need to effectively conserve and manage these areas. The CBD Secretariat was then tasked with organizing a series of scientific and technical workshops to describe these areas and include them in a repository of workshop reports to be transmitted to UNGA and international bodies. Criteria for EBSAs are i) uniqueness or rarity; ii) special importance for life-history stages of species; iii) importance for threatened, endangered or declining species and/or habitats; iv) vulnerability, fragility, sensitivity, or slow recovery; v) biological productivity; vi) biological diversity and vii) naturalness. EBSA networks include areas both beyond and within national jurisdiction.

After workshops in most marine and coastal regions of the world in earlier years, it was finally the turn of the East Asian regional seas in December 2015, when the 12th EBSA workshop was held in Xiamen, China. Scientific experts from twelve countries were represented in the workshop (China, Japan, Republic of Korea, Vietnam, Thailand, Cambodia, Malaysia, Singapore, Philippines, Indonesia, Timor Leste and Myanmar), all but one of which are EAAFP National Government Partners. World Wildlife Fund (WWF) representatives from Malaysia and Hong Kong were also participants. I was kindly invited by CBD to the workshop and gave a presentation on migratory waterbirds, intertidal wetlands and the role of EAAFP, proposing the idea of a regional EBSA covering intertidal areas of the shallow seas of East Asia. An intertidal group was then formed (other groups considered offshore and deep sea habitats) and I facilitated discussions on mud and sandflats, while others covered mangroves and seagrass beds. We agreed on an EBSA “Intertidal Areas of East Asian Shallow Seas” and identified 20 key sites covering nine countries, some of which are already Flyway Network Sites. However, each site needed to be mapped, with polygons, resulting in frenetic late night consultations, mainly with Birdlife International, through the good offices of Mike Crosby, to provide polygons for most the sites. Without these, it would have been impossible to propose the EBSA. The workshop report was reviewed at the CBD scientific body (Subsidiary Body on Scientific, Technical and Technological Advice, SBSTTA) in May 2016 before being approved at the recent 13th Conference of Parties in Mexico this month.

In addition to the intertidal flyway EBSA, additional EBSAs important for migratory waterbirds were proposed at the workshop, including intertidal areas Muan mudflats (Republic of Korea) and Upper Gulf of Thailand, and important seabird areas around Japan (e.g. for Japanese Murrelet) and the Sulu-Sulawesi Sea, which includes Tubbataha Reef [EAAF123]. Of course, the East Asian Seas constitute only part of the EAAF, and earlier EBSA workshops for the Arctic and North Pacific regions also included important marine and coastal sites for waterbirds and seabirds in Alaska and Russia.

The Intertidal Areas of East Asian Shallow Seas EBSA represents the first time that an EBSA has embraced a series of discrete sites spanning national borders, in this case linked by their importance for shared biodiversity (migratory waterbirds). Other migratory species, such as marine mammals and pelagic seabirds are also dependent on widely scattered sites for different stages of their life histories. There is an opportunity, through reviewing and expanding the current EBSA network, to more explicitly link these areas in what is a very dynamic set of marine and coastal ecosystems.