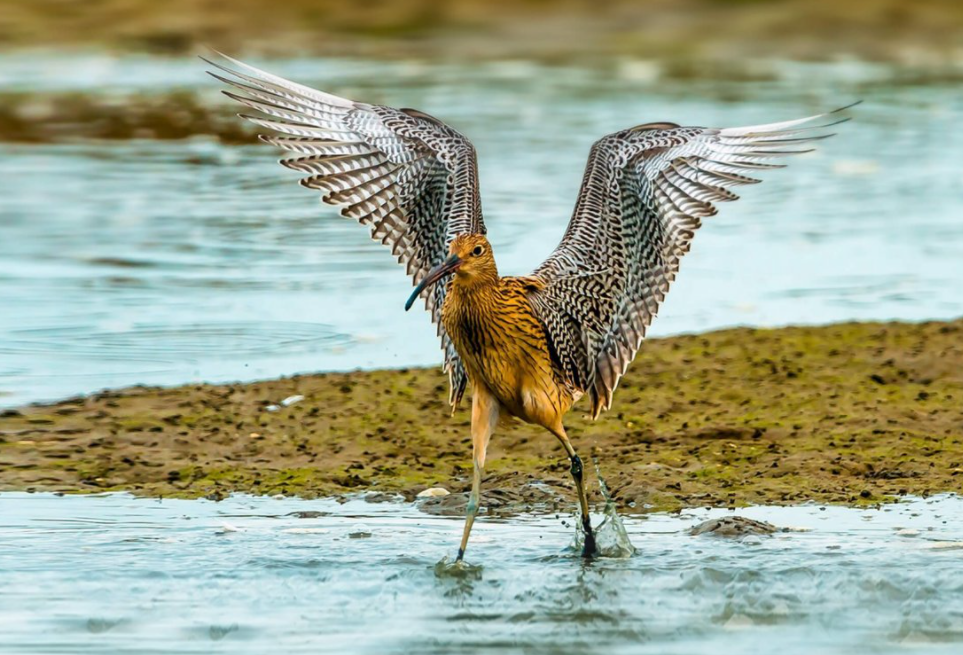 The curlews are one of the most widespread and far-travelling of all the bird families — and also one of the most threatened. It seems that wherever they roam, habitat loss and human encroachment follows. We can’t let the Far Eastern Curlew go the same way as its fellows. The Numeniini — a tribe of large waders including curlews and godwits — is one of the most threatened bird groups on the planet. The once-abundant Eskimo Curlew Numenius borealis of the Americas is now considered Critically Endangered (Possibly Extinct), having last been spotted with certainty in the 1960s. But the plight of the Numeniini also extends over the Atlantic into the Old World. Here, the extensive drainage of wetlands across the Mediterranean and North Africa — important wintering grounds for many migratory birds across the African-Eurasian Flyway — has rendered another species, the Slender-billed Curlew Numenius tenuirostris, missing in action for almost a quarter of a century.

With each year that passes, it becomes more likely that Europe has suffered its first avian extinction since the Great Auk croaked its last in 1852

Like the Eskimo Curlew, the possibility of the extinction of the Slender-billed Curlew cannot be confirmed for sure until we have scoured the entirety of its known breeding grounds in the Siberian wilderness for a remnant population. And although it hasn’t been recorded with confidence across its wintering range since February 1995, it’s possible that a few remaining Slender-billed Curlews — gregarious birds by nature — are still making the long trip south as part of a flock of a more common species, such as Eurasian Curlew Numenius arquata or Whimbrel Numenius phaeopus. Attempts to track down a straggling Slender-billed Curlew population continue, with the RSPB (BirdLife in the UK) recently using environmental data, gleaned from tiny atoms harvested from museum specimens, to pinpoint a potential breeding ground in the Kazakh steppes. But with each year that passes, it becomes more likely that Europe has suffered its first avian extinction since the Great Auk Pinguinus impennis croaked its last in 1852.

But while chasing ghosts is all well and good, those who don’t learn from history, as the saying goes, are doomed to repeat it. Attention must now be given to helping to protect the members of the Numeniini tribe that we know are still with us — and of this group, there is none more imperiled than the Far Eastern Curlew Numenius madagascariensis.

The Far Eastern Curlew is the largest and one of the most threatened migratory shorebirds in the world. Found only across the East Asian-Australasian Flyway (EAAF), this long-billed, intrepid traveller is finding it harder and harder to complete its gruelling migration journey each year, as its habitat continues to disappear along the flyway. Like most migratory shorebirds along the EAAF, the biggest conservation challenge for the Far Eastern Curlew is the urgent need to protect remaining intertidal habitat in the Yellow Sea, a bottleneck for shorebirds on both their northward and southward migrations.

While protecting habitat in the Yellow Sea is critical to the future of the Far Eastern Curlew, we also need to ensure that this magnificent bird, assessed by BirdLife as Endangered due to its recent, rapid population declines, has access to sufficient, high quality habitat across all stages of its epic migration journey.

Australia has a particularly important role to play. For almost six months of the year, over 70 percent of the world’s Far Eastern Curlews call Australia home. It’s the last stop on their southward migration and where they build their energy and fat stores to prepare them for the migration back to their breeding grounds in the Arctic. The scale of habitat loss in Australia may not be as dramatic as in the Yellow Sea, but Australians’ love for the coast has no doubt contributed to the decline in the world’s Eastern Curlew population.

Growing demand for coast-side developments and the ever-increasing amount of human activity on our beaches has meant that, for Far Eastern Curlews, who are notoriously wary of humans, there is less and less undisturbed feeding and roosting habitat at the southernmost end of their migration journey. This makes the places in Australia that still support large numbers of Far Eastern Curlews even more important to the survival of this species.

Moreton Bay [EAAF013] in Queensland is one such place. The vast mudflats of Moreton Bay provide a haven for over 40,000 overwintering migratory shorebirds each year, including over 3,000 Far Eastern Curlews. For this reason, it is recognised by BirdLife as both an Important Bird & Biodiversity Area (IBA) and a Key Biodiversity Area (KBA). Moreton Bay is also an important place for juvenile Far Eastern Curlews, with many young birds remaining in the bay for up to two years after their first southward migration. Here, they master the foraging skills they’ll need to sustain them for many migrations to come. In theory, Moreton Bay should continue to remain a safe place for Far Eastern Curlews. Listed under the Ramsar Convention on Wetlands, it’s protected under this international treaty and Australian domestic law as one of the most important wetlands in the world.

Yet, it’s possible that the Australian Government could soon approve a marina and residential development within the Moreton Bay Ramsar site, destroying important habitat for Far Eastern Curlew, and setting a dangerous precedent for the future protection of Ramsar-listed wetlands across the world.

The scale of habitat loss that would be caused by the proposed Toondah Harbour development might pale in comparison to that in other parts of the flyway, but if this development goes ahead, Australia will be sending a clear message to the international community that even the most important wetlands in the world are not safe from destructive development. For the Far Eastern Curlew, this does not bode well. Migratory shorebirds in the EAAF and across the world are in desperate need of stronger international collaboration and conservation, not actions that erode and undermine one of the most important international environmental treaties.

A development within the Moreton Bay Ramsar site, one of the most important places for this species in the world, will not only be bad news for those Far Eastern Curlews who call Moreton Bay home, but Far Eastern Curlews and other threatened waterbirds across the world. We cannot afford to wind back protection and sanction the destruction of the world’s most important wetlands.

BirdLife Australia supporters have been actively calling on the Queensland and Australian Governments to make the right decision and respect Ramsar, rather than sanction a development in a Ramsar-listed wetland. If they don’t, then for the Numeniini, already facing the possibility of two extinctions, bad things could happen in threes.