Posted on November 5, 2021 Categories: All News 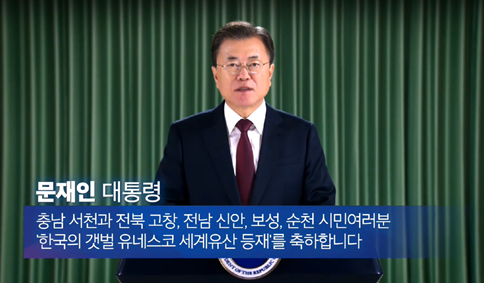 On 27 October, 2021, the Celebration Ceremony of Getbol World Heritage Inscription took place in one of the new World Heritage sites, Shinan County, Republic of Korea (ROK).

Beginning with a strong statement by President Moon Jae-In, highlighting his respect to the local citizens who chose to secure coexistence with nature to conserve the tidal flats, or locally known as Getbol, a global heritage, the ceremony was convened. He remarked on the unforgettable devotion shared by the local governments, ecology researchers and Kyrgyz Republic leading the support for the inscription as the World Heritage Committee member on Getbol. He promised the National Government’s strong continuous support to harmonize co-existence with human and nature through Getbol conservation, and to improve the living conditions for the local citizens. He said, “I truly believe that tidal flats are a treasure trove of biodiversity that connects human and nature, and it is the most valuable school where we learn how to live together with the planet.”

During the ceremony, the Cultural Heritage Administration presented the appreciation plaques towards the devoted site managers, domestic advisors and international communities who had supported the process of the inscription for the sites, including EAAFP Secretariat, Birdlife International, Royal Society of the Protection of Birds, International Crane Foundation, Wetlands International, Global Flyway Network of New Zealand and experts.

The certificates of the World Heritage Natural Heritage sites were also presented to the local governments during the ceremony.

Mr. Kim Hyun-mo, Administrator of CHA remarked on the success of the World Heritage inscription and acknowledged the efforts played by many stakeholders domestically and internationally. Mr. Kim stressed CHA’s devotion and efforts to manage co-existence between human and nature to continue the strong commitment made by the citizens, government officials, and the international community.

Mr. Kim Yung-Rok, the governor of South Jeolla Province gave his congratulatory remark with recognition of the international communities’ contribution. He acknowledged that strong efforts were made to conserve the Getbol and its ecological resource and will further enhance future value for the most valuable asset of mankind by working with local governments. Furthermore, he shared that through creating the ‘Getbol wetland garden’ it will manage the marine wetland ecology and ensure it will serve as the largest blue carbon reservoir. Mr. Kim stressed the necessity to establish a Getbol World Heritage integrated management center to conserve, manage and wisely use the wetland. He concluded in hope that more areas of tidal flats in the province can be included in the UNESCO tidal flat in the Phase 2 nomination.

Then Mr. Park Woo-ryang the head of Shinan County gave a commemorate speech reminding the 10-year efforts of the inscription from 2010 when it initially was inscribed on the UNESCO World Heritage tentative list up to 2021 during the 44th session of the World Heritage Committee when the Getbol was announced as a World Heritage. Mr. Park encouraged as around 40% of tidal flats are nominated as a global heritage in ROK, we need to support more local governments to designate wetland protected areas through alleviating the concerns raised by municipal cities and the residents. Moreover, he mentioned there needs to be a government-wide approach prioritizing eco-friendly agriculture and introduce policies such as sewage water quality charges at the Yeongsan River, and Geum River.