Our time at the Broome Bird Observatory (BBO), lucky for us, coincided with a
cannon net trapping day. I, along with my 14 peers and lecturer, all from Bendigo,
Victoria’s LaTrobe university Outdoor Environmental course joined in the processing
of the 179 shore birds caught during this trapping event. Our group, and others
staying at the BBO, were shown a short video on the cannon netting process the
night before to prepare us for the mornings trap. Some students amongst our group
had concerns for the wellbeing of the birds, and did not know what to expect for the
day so watching the video, along with the spiel Chris delivered before we went to
the site had us well prepared.
After Chris had given us the run down we loaded the cars and headed to the netting
site, a short drive from the BBO. Us young university students were the designated
‘runners’. Our job was to race to the net, about 50 meters from where we were
hiding amongst the dunes. Thanks to Chris’s work surveying the birds roosting sites
prior to the cannon netting, we were only waiting a few minutes until the mixed
flock of shorebirds where corralled into the small target section. With some skilled
ushering the flock of 179 birds made up of four species where successfully caught.
Because of the morning’s rising tide those of us at the net had to act quickly so that
the birds would not be tumbled around in the lapping water. After we had swiftly
moved the birds up the beach under the net, above the high tide line, other helpers
were on hand with covered tubs for us to divide the birds and species amongst. 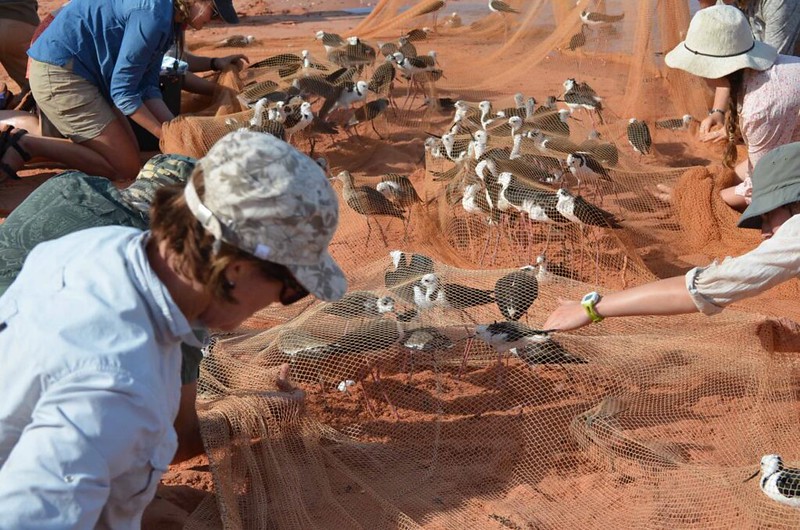 Extracting birds from under the small-mesh net. © Deb Mostert

The tubs of birds were carried 100 meters down the beach to where some of the
students had set up shade mesh cages and a shelter to keep us, and the birds, cool
during the four hours of processing.

In this particular trap we caught 50 Black-tailed Godwits, 124 (9 re-traps) Blackwinged
Stilts, three Gull-billed Terns, and two Silver Gulls. The large number of
Black-winged Stilts was thanks to above average rainfall during the wet season,
creating plentiful breeding conditions on the local plains. This was also evident
through the trapping of 57 Black-winged Stilts in their first year of life. The oldest retrapped Black-winged Stilt was 15+ (in its 15th year of life or older) other old stilts
were 14+. 12+ and 11+. The Black-winged Stilts were tagged with an engraved yellow
flag for the Australian Wader Study Group. The Black-tailed Godwits are part of a
migratory bird study of the Global Flyway Network. The Black-tailed Godwits had
different combinations of colored bands attached to their legs to identify each
individual bird. A blood sample was also taken to determine the sex of the bird. The
50 Black-tailed Godwits processed consisted of 39 one year olds, four two year olds,
and seven birds at least two years old. All three of the Gull-billed Turns happened to
be in their first year of life, and of the two Silver Gulls, one was at least 2 years old
and one, one year old.

Hopefully the work Chris, the BBO, and the volunteers are putting in contributes to
the conservation, protection and appreciation of these magnificent birds. Getting up
close and personal, being able to feel the soft juvenile plumage, and dodging the
snapping beaks of the Terns grew our love for the birds. Learning about their
nomadic and migratory breeding cycles highlighted the importance of the GFN and
AWSG studies. The more people that get to have these kind of experiences,
twitchers or not, the better for the birds, the environment, and themselves. 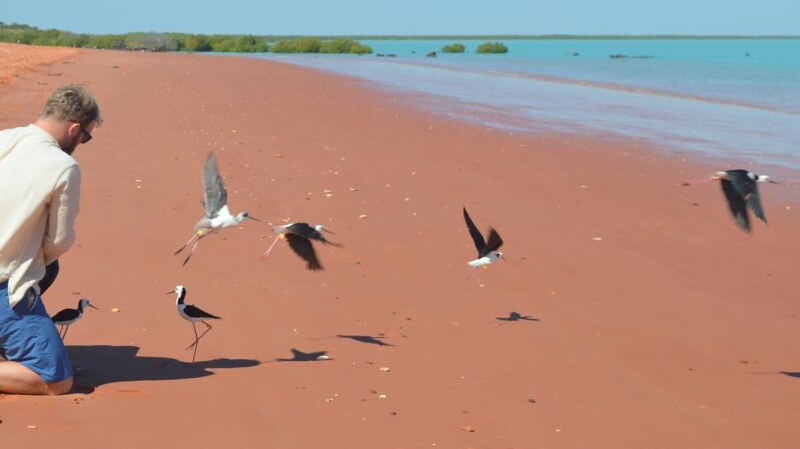 The students from La Trobe are a joy to work with each year and always make that
catching day a good one.

Thank you Greg and all of the students. 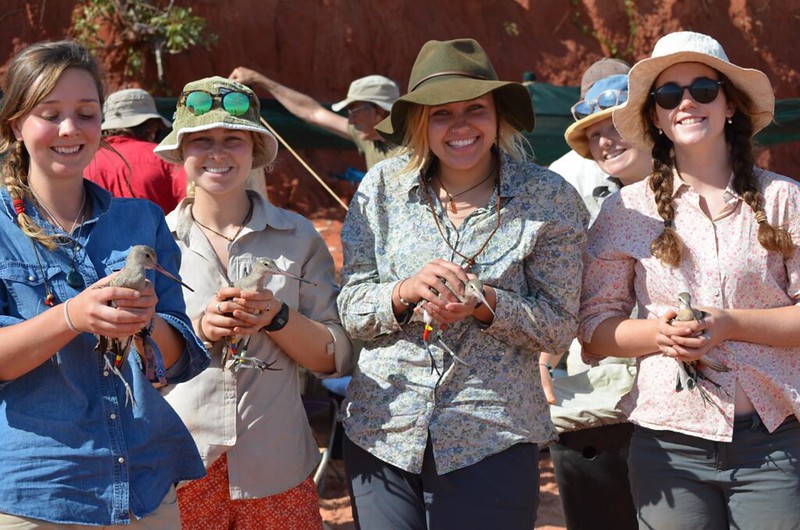 Some of the students clearly enjoying shorebird research! © Deb Mostert