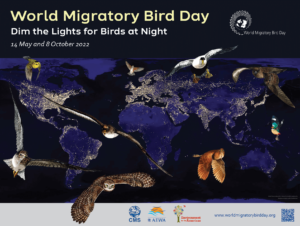 This year the theme of World Migratory Bird Day “Dim the Lights for Birds at Night!” invites everyone to dim unnecessary lights at night to reduce light pollution for the safe passage of migratory birds.  Light pollution is a big problem for migrating birds, especially those who migrate at night as it can not only disorient them and cause them to collide into buildings but also disrupt their biological rhythms. WMBD this year hopes to bring this issue to light and encourage concrete actions from key stakeholders to address it. 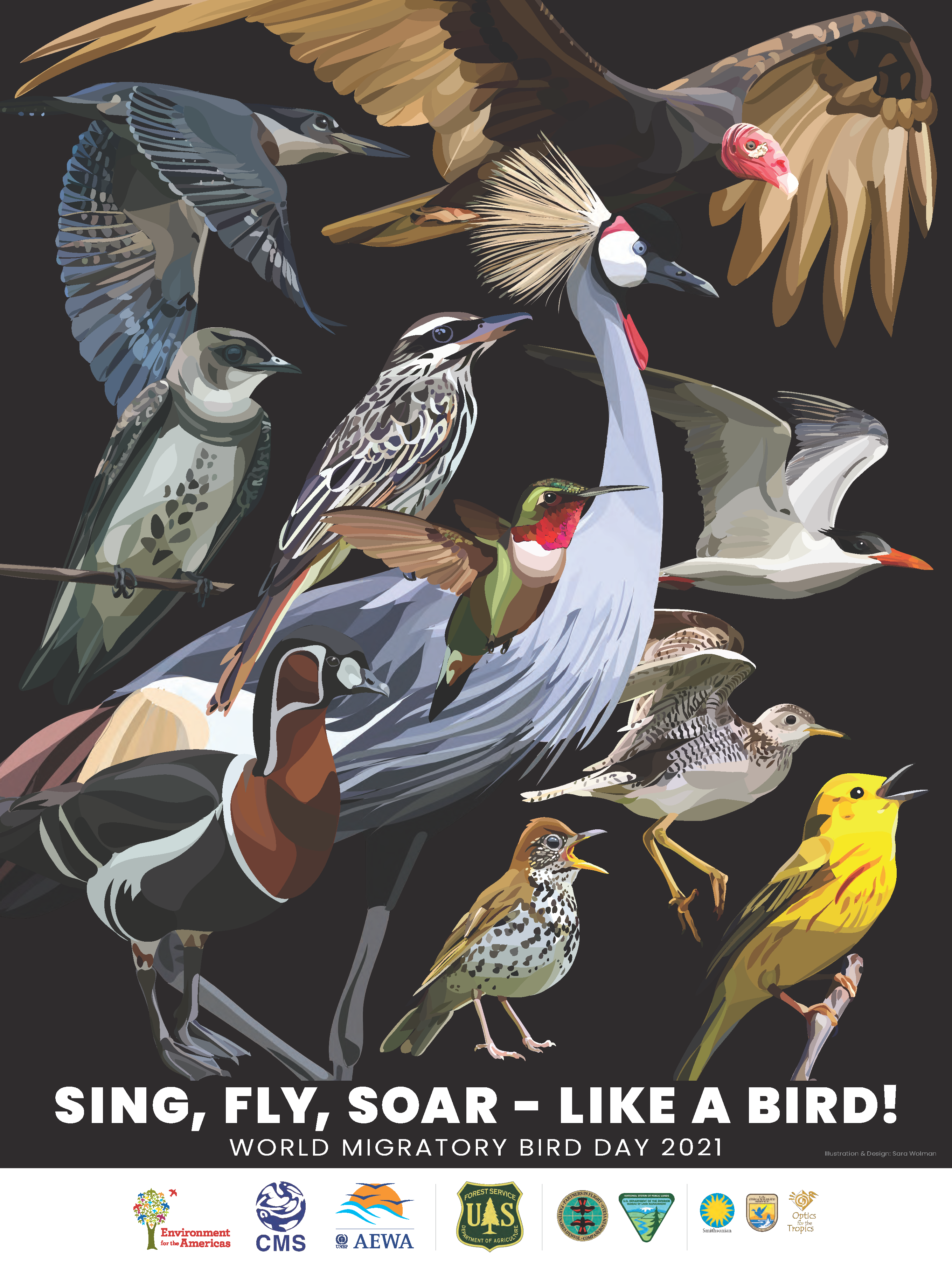 This year the theme of World Migratory Bird Day “Sing, Fly, Soar – Like a bird!” is inviting people from all over the world to appreciate migratory birds and reflect on the relationship with nature by listening to and watching birds. The campaign is focusing on the phenomena of “bird song” and “bird flight” to inspire and connect people in the shared desire to celebrate and protect migratory birds and their habitats, as migratory birds continue to sing, fly, and soar between their breeding and non-breeding sites. 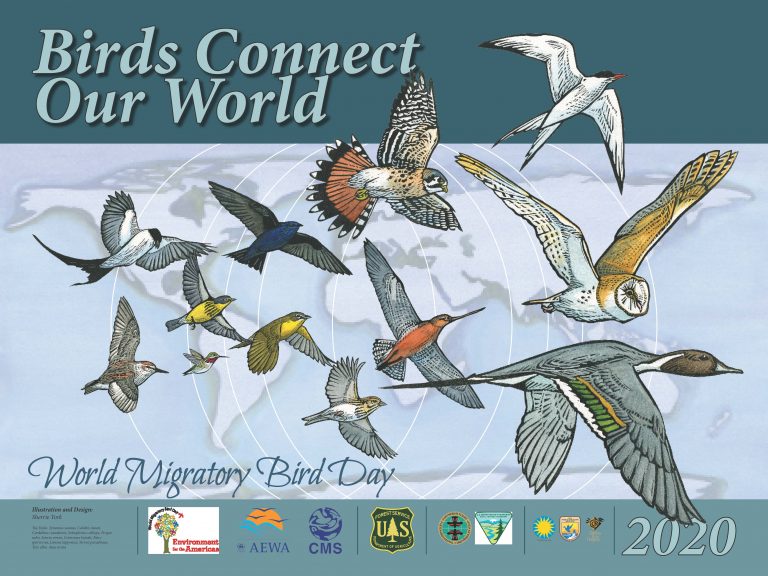 This year the theme of World Migratory Bird Day is “Birds Connect Our World” and was chosen to highlight the importance of conserving and restoring the ecological connectivity and integrity of ecosystems that support the natural movements of migratory birds and that are essential for their survival and well-being. With the theme “Protect Birds: Be the Solution to Plastic Pollution!,” WMBD 2019 highlights the impact of plastic pollution on migratory birds and their habitats. This is an opportunity for different stakeholders to discuss possible and practical solutions to plastic pollution in the World. We all have the responsibility, so let’s take actions to tackle this global issue! With the theme “Unifying our Voices for Bird Conservation,” WMBD 2018 highlights the importance to communicate and learn from each other across borders, within and between the world’s flyways. Let’s unify our voices and actions to reach out even further throughout the flyways. From 2018, the new joint campaign of “World Migratory Bird Day” will be twice a year, on the second Saturday in May and in October. With the 2017 theme “Their Future is our Future,” WMBD will highlight on the topic of “Sustainable Development for Wildlife and People.” WMBD 2017 focused on the interdependence of people and nature, and more especially people and migratory animals – in particular birds, as they share the same planet and thus the same limited resources. The 2017 campaign aimed at raising awareness on the need for a sustainable management of our environment, demonstrating that the conservation of birds and their habitats is also crucial for the future of humankind. The theme for WMBD 2016 was ‘Stop the illegal killing, taking and trade of migratory birds.’ In countries of the EAAF, many resident and migratory bird species are illegally taken or killed. While certain countries have very strong legislation against the killing of wild birds, in others the legislation is weak or poorly enforced. In some cases, the illegal take is unsustainable and leads to population declines, threatening the survival of the species. While the situation is improving in quite a few areas, the message of this year’s WMBD remains very timely. With the  theme “Energy – make it bird-friendly!”, WMBD 2015 highlighted the importance of deploying energy technologies in a way that prevents, minimizes and mitigates impacts on migratory birds and their habitats. In addition, the birds suffer effects from habitat loss and degradation including non-bird-friendly energy technologies. The 2015 theme for EAAF ‘Save migratory birds and the places they need’ highlighted the urgent need to conserve migratory waterbirds habitat under our Flyway.

With the theme “Destination Flyways: Migratory Birds and Tourism,” WMBD 2014 highlighted the links between migratory bird conservation, local community development and wildlife watching tourism around the world. Every year, more than one billion tourists cross international borders. A thriving wildlife is a key tourism asset, and the spectacular movements of the world´s migratory birds are no exception. Properly managed, popular bird-related tourism activities such as bird watching or bird photography can serve as the foundation for a mutually beneficial relationship between people and migratory birds. WMBD 2014 on 10-11 May was the most successful ever with over 400 events celebrated in 90 countries. The year’s WMBD theme – Networking for migratory birds – highlights the importance of networks of sites for migratory bird along their migration routes. The 2013 World Migratory Bird Day Poster highlights a few of the thousands of sites important for bird migration. Migratory birds travel high distances along their migration routes, sometimes even tens of thousands of kilometres. These connected sites act like stepping stones and are used by birds to migrate. They are important for resting, feeding, breeding and wintering. Joint action in the form of international cooperation is needed, since conservation efforts in one country can be completely jeopardized by the loss of a single site in another. Over 350 separate awareness-raising events were held in 88 countries to mark World Migratory Bird Day 2013.

In 2012 the WMBD theme focused on the cultural relationship between birds and people. Throughout time and across cultures humans have relied on birds, be it to supply food, to deliver messages, or to serve as symbols of power and prestige. Amazingly more than 250 events were registered in 81 countries around the world on May 12th and 13th, showing an increase of 25 % from 2011 and an expansion of three-fold since its inception in 2006.

The year 2011 was for World Migratory Bird Day absolute record breaker thanks to an amazing 204 registered events in 64 countries worldwide. It was celebrated on 14th and 15th May 2011 and focused on conversion of natural areas into agricultural land, the construction of buildings, roads and dams, or deforestation, which are just some examples for the human use of land, also known as land use, while migratory bird populations are particularly sensitive to these changes.

On 8-9 May 2010 World Migratory Bird Day was celebrated in over 40 countries around the world. Under the theme “Save migratory birds in crisis – every species counts!”, over 90 registered events took place around the world. The 2010 campaign was closely linked to the International Year of Biodiversity and raised awareness on globally threatened migratory birds, with a particular focus on those on the very edge of extinction – the Critically Endangered migratory birds.

On 9-10 May 2009 World Migratory Bird Day was celebrated in over 50 countries around the world. Under the theme “Barriers to migration”, 130 registered events took place. These events helped to raise awareness on man-made barriers and demonstrated that obstacles like wind turbines, power lines and tall buildings pose a threat to migratory birds.

In 2007, World Migratory Bird Day was celebrated in more than 58 countries and with more than 100 different events all across the planet on 12-13 May. The theme “Migratory birds in a changing climate” helped to focus the world’s attention on the plight migratory birds are facing due to global warming. WMBD activities highlighted the effects that increasing temperatures, altered rainfall and vacillating weather conditions have on migratory birds.

The first World Migratory Bird Day took place on 8-9 April, 2006. At the time, migratory birds were receiving very negative media coverage as a result of them being falsely believed to be the main cause for the spread of Avian Influenza (H5N1) around the world. So the idea arose to use the first World Migratory Bird Day to counter some of the negative and often unbalanced publicity migratory birds were receiving at the peak of the Avian Influenza discussion. For this reason the theme of the first World Migratory Bird Day in 2006 became: “Migratory birds need our support now!”. The centre of the campaign was a launching event called WINGS which took place on the edge of the Great Rift Valley in Kenya and was hosted by Ms. Kuki Gallman, a famous writer and conservationist. Altogether, 68 other WMBD related events took place in all corners of the world to support the launch and the very first WMBD campaign.