AN IMPORTANT FIRST FOR SIBERIAN CRANES 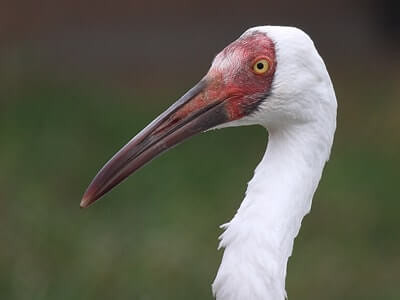 Exciting news from International Crane Foundation Research Associate, Dr. Nyamba Batbayar – our Mongolian colleagues successfully captured and banded the first Critically Endangered Siberian Crane in Mongolia! Scientists have surprisingly little information about where sub-adult or non-breeding Siberian Cranes summer. In order to take the most effective action to protect cranes and their habitats, we need more information about where they go and what threats they may face along the way or once they are there. With this first banding, we are on our way to gaining this critical knowledge!

The young crane was captured near the team’s research camp in Khurkh Valley, where small groups of non-breeding Siberian Cranes have been sighted the last few years. The valley is an important breeding area for Threatened White-naped Cranes, which Nyamba and his colleagues at the Wildlife Science and Conservation Center of Mongolia have been studying for several years. The team has regularly banded and placed tracking devices on White-naped Crane chicks and a small number of molting and flightless adults through this research; however using these techniques to capture this sub-adult crane, let alone a Critically Endangered bird, was challenging and unusual. 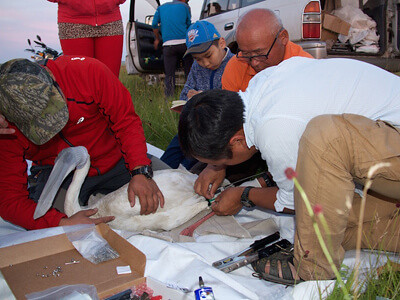 Photo by Wildlife Science and Conservation Center of Mongolia

The Siberian Crane was captured by two experienced researchers, who placed a satellite transmitter provided by the International Crane Foundation on the crane’s left leg (30g solar North Star GPS PTT), and a red-blue-red color leg band on its right leg (left). The team named the bird “Mongol.” The young crane was deemed healthy and was completing a molt of its flight feathers. The team quickly took leg and wing measurements, collected feathers, a fresh fecal sample, and throat swab for further study, and released the bird to rejoin its flock.

We now hope to track the banded crane’s migration this fall and learn important information on the behaviour and movements of young Siberian Cranes from the time they leave their parents after their first winter until they return to the remote tundra in Russia to breed.