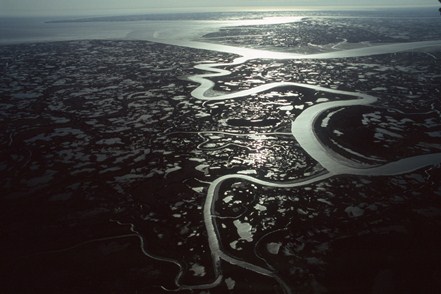 The aerial view of the YDNWR landscape © Julian Fischer

The Yukon Delta National Wildlife Refuge (YDNWR) in the Alaska was approved by the Chair of the EAAFP on 10 October and has been added to the Flyway Site Network as the 109th Network site.

The designated area includes the coastal portion of YDNWR, Nunivak Island as well as the surrounding waters and seafloor for which YDNWR has jurisdiction. The site encompasses about 4,824,000 ha and comprises extensive grass-sedge meadows in the contiguous deltas of the Yukon and Kuskowin Rivers as well as estuaries, sea coast and an offshore island. The mostly treeless landscape is dominated by small wetlands that, when thawed in summer-autumn, provide breeding and post-breeding habitat for waterbirds from several families, including ducks, geese and shorebirds. The waterbirds disperse into both the East Asian-Australasian and American flyways. A regularly-surveyed area of 12,832 km2 out of the entire proposed site supports approximately 900,000 waterbirds including waterfowl, loons, cranes, gulls, terns and jaegers. Of the waterbirds using the site, at least 500,000 migrate into the East Asian – Australasian Flyway. These include 61,000 Bar-tailed Godwit and at least 375,000 Dunlin. There are also appreciable numbers of an endangered or vulnerable species such as Steller’s Eider and Emperor Goose. Go to find details