The wetlands of the Yellow Sea shared by China, North and South Korea are a globally important hotspot for waterbirds of the East Asian-Australasian Flyway. Several million waterbirds, including 20 globally threatened species depend on these wetlands to complete their annual migrations; shorebirds like Bar-tailed Godwit, Great Knot and Far Eastern Curlew fly to and from their non-breeding grounds in Australasia to the Yellow Sea coast in a big non-stop leap of over 6000 km! Many birds stay on here and spend the northern winter in areas that are not frozen, feeding on the rich inter-tidal life.

Timed with the northward migration season, we organised a “Yellow Sea-Bohai Sea Synchronized Waterbird Survey Training Workshop” in Beijing in mid-April. The event brought together representatives from the Ministry of Environmental Protection, State Oceanic Administration and State Forestry Administration – the three main agencies responsible for coastal wetland management. Importantly, it also brought together heads of nature reserves and their staff from the Yellow Sea who are keen to work with university professors, research students and others to strengthen the monitoring of their sites. We outlined the importance of the survey work and common methods to be adopted in the field to enable results to be comparable. It was great to see the enthusiasm of the groups to jointly develop and present their field plans and survey sites.

This meeting was followed by a week-long synchronised waterbird surveys at over 20 locations covering many nature reserves and other important sites along the Chinese Yellow Sea and Bohai Sea coasts. The counts were largely led by the nature reserve staff with input of bird watchers from universities, institutes and NGOs. This provided an opportunity for infield training of reserve staff and  also provided a snapshot of the populations of waterbirds using these areas and the condition of the wetlands. The results from the surveys are being collated and will be available later this year.

I was fortunate to join the reserve staff team in the Yellow River Delta National Nature Reserve in Shandong Province along with Lu Yong from our China office. We spent three great days visiting coastal and inland sites and taking counts of the birds. We first visited the northern part of the reserve, including the old river mouth, an important area of mudflat divided by a number of creeks that limited access.

In one mudflat area surrounded by “oil donkeys” that are used to extract crude oil, we saw small numbers of migrating shorebirds, including Far Eastern Curlew (a globally Endangered species) that started to arrive to feed on the falling tide.

In another area that we were able to access by a boat, a few hundred shorebirds were seen feeding along a narrow stretch of coast. These mudflats were being extensively used for harvest of bivalves for food – in the small area we visited there were 92 people upturning the mud to extract them. Their actions visibly change the structure of the mudflat and must reduce the area available to the birds, at a time when they are trying to fatten up for the next phase of their migration. Another group saw several thousand birds on their stretch of mudflat.

We found the beautiful Saunders’s Gull to be quite numerous. This globally Vulnerable species is largely limited to the Yellow Sea. We were just a little too early to see them nesting, but several pairs were displaying. The reserve staff informed us that the gulls were nesting in increasing numbers in the reserve and appear to be responding positively to creation of large and safe islands that are conducive for their nesting. 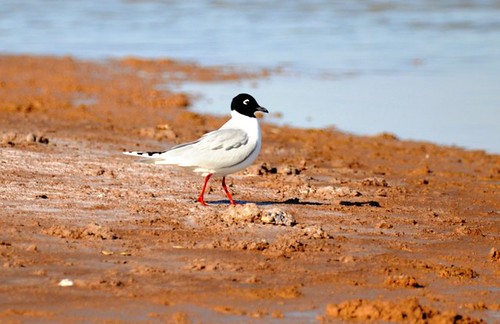 On the last evening we took a small boat to the new mouth of the Yellow River to check out the intertidal mudflats and islands and the birds they support – a part of the reserve that the staff don’t get to visit too often. We saw many flocks of shorebirds, ducks and other waterbirds feeding along the mud banks. The trip ended after a fantastic sunset and in the fading light we saw two groups of five beautiful white and black cranes descending on the river bank to rest for the night. These were quickly identified to be Critically Endangered Siberian Cranes, of which there are less than about 4000 individuals left in the world. These birds would have flown from famous Poyang Lake (along the Yangtze River), their main non-breeding site. They need to stop at safe places along their long migration across China to the northern Russian arctic where they will nest – this reserve is one critically important resting site, one of many designated as a Ramsar Site and as part of the East Asian-Australasian Flyway Site Network. 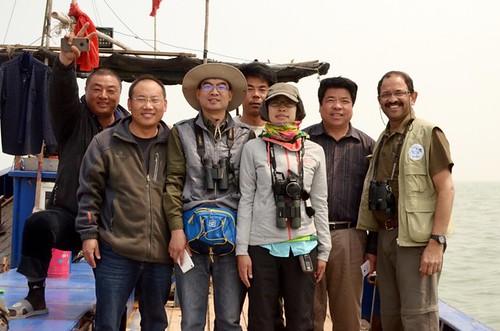 It was a surprise to me to see just how much of this coastal region is covered with oil donkeys, as well as associated roads and infrastructure, and to learn of the recent sea-cucumber farms and wind mill developments. We also saw the extensive port and urban developments. A major challenge is increased water allocation along the course of the Yellow river and increased usage upstream that has decreased the volume and flow of water to the delta and the nature reserve. This has resulted in salt water from the sea entering the coastal ground water, affecting soil and agriculture, as well as changes to the mudflats and growth of non-native plant species. The cumulative impact of all these developments on the habitats is expected to reduce safe feeding, resting and nesting areas for these birds. In response, the staff also created some freshwater areas to try and increase habitat diversity for waterbirds within the Ramsar site.

We discussed these complex issues related to conservation and management of wetlands and waterbirds; the nature reserve staff greatly appreciated all the information and experience we had to share. They were eager to learn more about how they can improve their management activities and invite our guidance in this. So I look forward to working with them in the future on this important site.