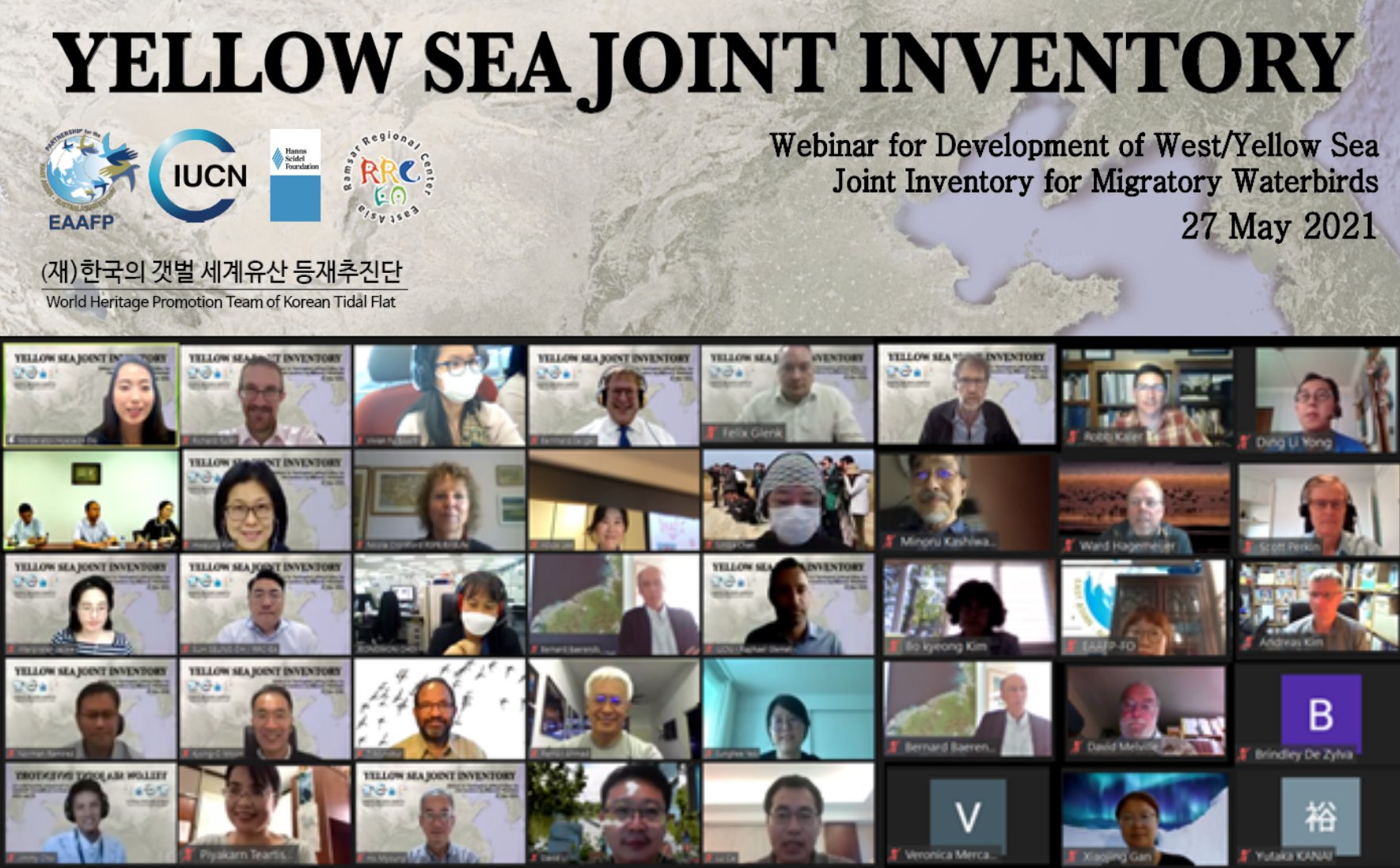 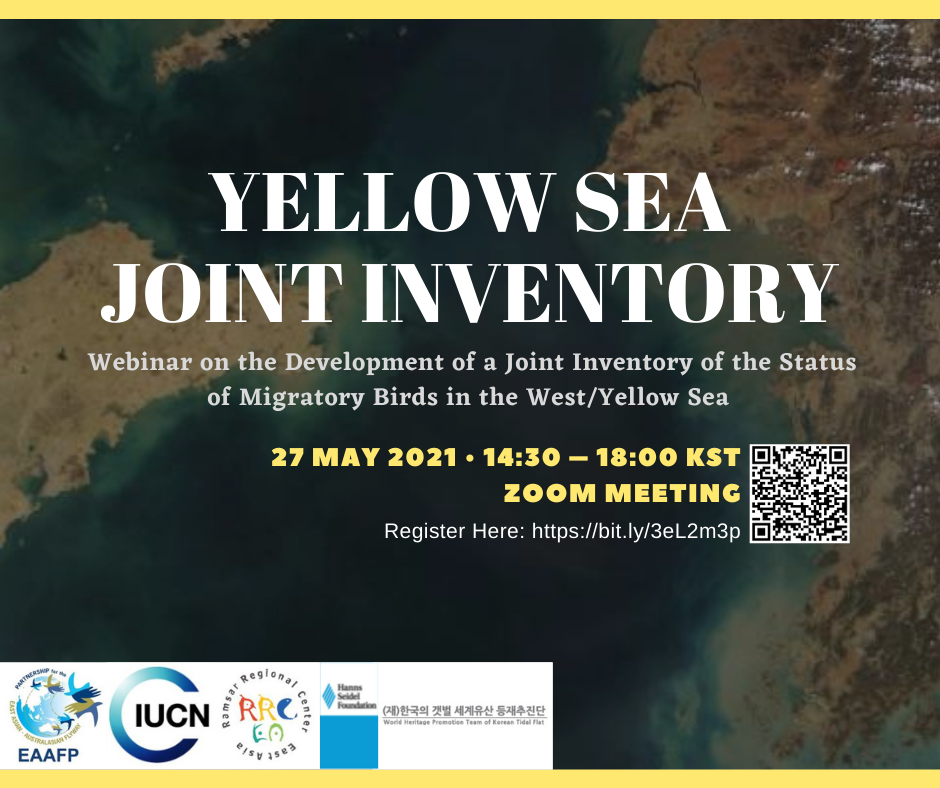 The West/Yellow Sea (hereinafter referred to as “West/YS”) ecosystem consists of the largest intertidal flats in the Flyway. It covers parts of the coasts of the People’s Republic of China (PRC), the Democratic People’s Republic of Korea (DPRK) and the Republic of Korea (RoK). Also regarded as the most important staging area for millions of migratory waterbirds in the East Asian – Australasian Flyway (EAAF). A joint Working Group (WG) for these three countries for the conservation and management of the West/YS was established in 2017 and has been facilitated under the umbrella of the IUCN, the EAAFP and the RRC-EA acting as Secretariat. (More information of the WG: 3rd meeting of the WG)

To kick start with the webinar, Mr. Norman Emmanuel Ramirez, Programme Officer of RRC-EA presented the updates of The West/YS WG workplan for 2021. Following that were three sessions and a panel discussion. In session 1, Professor Richard Fuller from the University of Queensland, EAAFP Technical sub-Committee member, shared the importance of the West/YS for migratory shorebirds, identifying the key species, population trends, and habitats in EAAF. He illustrated with data on migratory birds collected across Australia, to show the relationship and importance of the West/YS linking to status of migratory birds in Australia. Using satellite tacking data of Far Eastern Curlew as an example, Professor Fuller further emphasized that the West/YS conservation should be approached as a single unit rather than three individual countries. Hence, collaboration and cooperation among the countries is essential, and coordinated monitoring will enable more effective research and conservation efforts for the Flyway.

In session 2, national conservation status of birds and monitoring approaches of the three countries were shared. First by Dr. Kim Hwa Jeong from National Institute of Biological Resources, Ministry of Environment of Ro Korea and then a summary by Korea Marine Environment Management of Corporation, Ministry of Oceans and Fisheries of Ro Korea. Dr. Kim highlighted the importance of waterbird monitoring, considered as the first step for conservation efforts. Next, Dr. Zeng Qing from Center of EAAF of Beijing Forestry University presented updates in China, including monitoring programmes from local NGOs. Dr. Qing shared the Chinese governments support and recognition of the West/YS as the central hub of EAAF and highlighted the importance of coordinated monitoring in enhancing more research and conservation works around the area. Mr. Hu YuanHui, Deputy Director General, International Cooperation Center, National Foresty and Grassland Administraiton also shared the launching of a new GEF project around the West/YS that aims to improve the situation around the area. He further acknowledged that despite the workload and effort needed to conserve the area it can also be viewed as an opportunity for the EAAFP to play out an essential forefront role. Lastly, while DPRK representative couldn’t represent in the event due to the internet connection issue, Dr. Bernhard Seliger from the Hanns Seidel Foundation Korea Office, summarized DPRK’s current conservation work and monitoring efforts. He further shared DPRK’s interest in international cooperation, and the many achievements and progress made within the country to cope with the aim of conservation.

A panel discussion was then followed, to share insights on developing joint monitoring and the roadmap for the three countries on the join inventory for migratory birds in the West/YS region. Mr. Bernard Baerends, Executive Secretary from the Common Wadden Sea Secretariat, started by highlighting the need of a common goal and understanding, with close collaboration between science and the local knowledge. Moreover, he mentioned that regular exchanges will be essential to execute the development of common guidelines and to facilitate a network that will sustain government support. Ms. Nicola Crockford, International Species Policy Officer, Birdlife International, suggested the need of a communication channel between the three countries when establishing a monitoring system. This will provide cooperative works to be undertaken among countries and relevant stakeholders, enabling balanced and harmonized conservation actions. Mr. Myeong Ho, Vice President of Eco-Horizon Institute, highlighted the importance of recognizing citizen science programmes to supplement from national monitoring schemes. A join platform of the three Yellow Sea countries, standardizing monitoring methodology and an information sharing mechanism are important. He also suggests to build a West/YS MPA visitor centres network. Dr. Jimmy Choi, Research Assistant Professor from Southern University of Science and Technology, gave examples of different citizen science programmes which contribute critical data for conservation measures while sharing challenges. He also mentioned the importance to set accurate goals and to proceed with finding scientific methodology at the initial stage for monitoring design. Dr. Taej Mundkur, Senior Technical Officer from Wetlands International (WI) shared their current project, ‘The Flyway Bottleneck YS project’ working closely with UNDP. Dr. Mundkur highlighted the importance of building close networks at the national and local level, proceeding regular coordinated councils on wetland assessments throughout the year.

The last session of the webinar concluded with an update on the progress made for Getbol, Korean Tidal Flat, World Heritage (WH) nomination. Dr. Moon Kyong-O, the Secretary General from the Korea Getbol WH Promotion Team shared the importance of Getbol’s WH inscription that will immensely improve the conservation of the West/YS as a whole and raised the cooperation with PRC. Ms. Sunghee Yeo, Head of WH Division of Cultural Heritage Administration (CHA) of RoK also shared the importance of paying attention to the migratory birds at the West/YS region, and hoped to continue their work with EAAFP, IUCN, and other relevant international organizations.

The webinar, the Development of a Joint Inventory of the Status of Migratory Birds in the West/YS successfully came to an end with the three countries and different stakeholders coming together to discuss the approaches that would be needed to achieve a common goal to enhance effective and sustainable conservation and monitoring approaches in the West/YS.