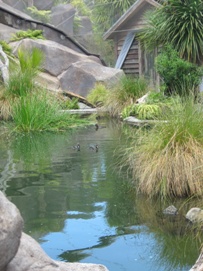 World Wetlands Day is celebrated on the 2nd of February each year. The purpose of the day is to promote wetland awareness and conservation, and to commemorate the international Convention on Wetlands, adopted on 2 February 1971 in the Iranian city of Ramsar. The theme for World Wetlands Day 2013 is “Wetlands and Water Management”. This acknowledges the role that wetlands perform in filtering nutrients and pollutants, and in absorbing water to reduce the effects of flooding or drought.

World Wetlands Day was celebrated in Auckland on Saturday 2 February 2013. The event was hosted by the Auckland Zoo and supported by the National Wetland Trust of New Zealand, Forest & Bird, Fish & Game, Ducks Unlimited, and WaiCare. The event was located at Ng? Repo, the wetlands exhibit in Te Wao Nui, the new native area of the Zoo.

Ng? Repo replicates a lowland swamp with sedges, reeds and threatened plants on the edge of a lake. The lake supports native birdlife including pateke (brown teal), tete (grey teal), papango (New Zealand scaup), and white-faced heron. In a large tank are several enormous long-finned eels. Zoo staff provided talks throughout the day along with feeding encounters with the birdlife and eels, and informed the public on conservation issues associated with wetlands and the species that inhabit them.

The National Wetland Trust was represented by Deputy Chair, Kristy Hall, and member Paul Woodard who is a native fish expert. The Trust provided activities for kids including colouring-in and crafts, consisting of making a woven fish out of coloured paper. Paul brought along two aquaria of native fish which kept both adults and children entertained. The first tank held the nationally endangered burgundy mudfish (Neochanna heleios). This species was only discovered in the late 1990s and is endemic to Northland, being known from only three sites on the Kerikeri volcanic plateau (O’Brian and Dunn, 2007). Mudfish are unusual as they often inhabit acidic soil in peat bogs, and bury into the mud to aestivate (similar to hibernating) during periods of dry weather (Ling, 2001). The biggest threat to this and other mudfish species is habitat degradation, mainly the drainage of wetlands and the maintenance or clearance of drains. 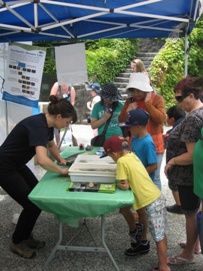 Kids looking at stream invertebrates with Marnie Prickett from WaiCare

In the second aquarium tank, there were two whitebait species, inanga (Galaxias maculatus) and banded kokopu (G. fasciatus), along with a large common bully (Gobiomorphus cotidianus). Inanga are an at risk species that are declining, but are legally caught as the main component of whitebait fisheries. Inanga breed in estuarine wetlands which are at risk of drainage, grazing and land development. Inanga are poor climbers and can be excluded from adult habitat upstream by culverts, dams, ponds and other barriers to fish passage. At the other displays, Forest & Bird promoted the risk of introduced predators to New Zealand’s flora and fauna, and the importance of pest control. The Waitakere Branch runs Matuku Reserve near Bethell’s Beach, which is Forest & Bird’s second-largest reserve at 120 hectares. The reserve comprises of coastal broadleaf forest and kauri-tanekaha forest with 20 hectares of wetland, part of the wider Te Henga Wetland. This is part of the largest relatively unmodified freshwater swamp in mainland Auckland.

At the Fish & Game tent there were stickers for the kids and educational material to encourage farmers to restore wetlands and protect game bird habitat. The 2013 Game Bird Habitat stamp was launched on World Wetland Day in Wellington this year by Conservation Minister Nick Smith, and features the endangered New Zealand bittern (Botaurus poiciloptilus). Bittern are not allowed to be hunted but they share similar wetland habitat to game bird species. Fish & Game use the proceeds from the stamps programme and other activities to fund wetland habitat protection.

Ducks Unlimited works to conserve wetlands through protection, funding, technical assistance and education. At the Zoo, Ducks Unlimited promoted the Quack Club which specifically aims to get children enthused in wetland conservation. The Quack Club provides a newsletter and activities and teaches kids about wetland habitats, and the species that inhabit them. It is free for the first 12 months of membership. Ducks Unlimited other activities include establishing a pateke captive breeding programme and administering Wetland Care New Zealand which funds a number of community projects throughout New Zealand. At the neighbouring WaiCare tent, children were kept entertained spotting water boatmen, Potamopyrgus water snails and introduced pest fish gambusia (Gambusia affinis) that were literally fished out of the adjacent Meola Creek. WaiCare is a community programme, funded by Auckland Council that promotes caring for waterways and catchments across the Auckland region.