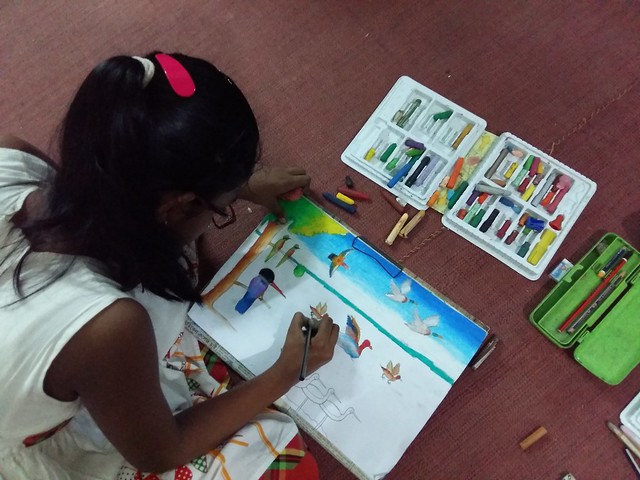 Event title:
World Migratory Bird Day Event
Organizer:
Nature Conservation Society
Participants: Nearly 1000. Most of them were school and college students & members of the local community
Outcome:
– Mass awareness for youth and local community for the conservation of wetlands and supported species, specifically migratory birds.
– Motivation of policy makers, social and media personnel.
– Conservation education program for school  and college teachers.
Summary:
In Bangladesh, World Migratory Bird Day 2017 was celebrated in a colorful way. The main event was conducted in Moulovibazar. On the 9th of May, an art competition was held at Shishu Academy, Shunamgong and the topic of the drawing competition was migratory birds and their habitat. 60 School children (Group A: Class 1-5; Group B: Class 5-10) took part in the competition. On the 10th of May, a colorful rally was organized by Nature Conservation Society with the help of the local Forest Division followed by a seminar at Moulovibazar Government High School Auditorium. Nearly one thousand people took part in that rally in which most of them were school and college children & haor community people. Representatives from District Administration, the Police Department, NGOs, College and School, Co-management Council, the Local Government, the Forest Department, the Fisheries Department, the Environment Department and University teachers were also present at the event. In total, three presentations on Migratory Birds & Biodiversity of Wetlands were given during the seminar. At the end of the seminar, a short drama was presented by the Nature Conservation & Study Club of Jagannath University on the importance of migratory birds and wetlands. Besides this, the entrance of the auditorium was decorated with 50 selected photographs of migratory birds that are commonly seen in Tanguar Haor every year. The aim of this program at the migratory bird habitat site was to increase awareness and boost involvement from the next generation in the local community towards the conservation of migratory birds and their habitats.