World Heritage status for migratory waterbirds and their habitats? 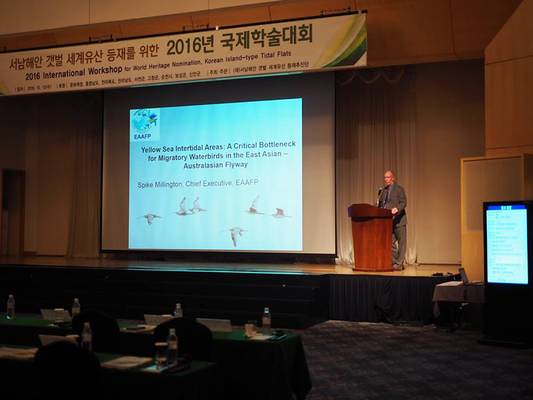 Recently I participated in a workshop at Mokpo in the southern part of Korea focusing on Korea’s initiative to nominate its southwestern tidal flats as a World Heritage site. A hard-working team has been developing this proposal for a few years now, with the help and advice from experts from the Wadden Sea, itself inscribed on the World Heritage list after 20 years of preparation. The World Heritage Convention, adopted in 1972 under UNESCO aims to designate “places on earth that are of outstanding universal value to humanity and as such, have been inscribed on the World Heritage List to be protected for future generations to appreciate and enjoy.” World Heritage sites are “the best of the best” and can be nominated for their cultural significance or their natural values, or sometimes both. The southwestern tidal flats of Korea actually have a distinctive geomorphological character, described evocatively during the meeting as “islands in a sea of mud” but they are also important as a stopover site for migratory waterbirds, notably the area around Yubu island [EAAF101] in the Geum estuary [EAAF100]. 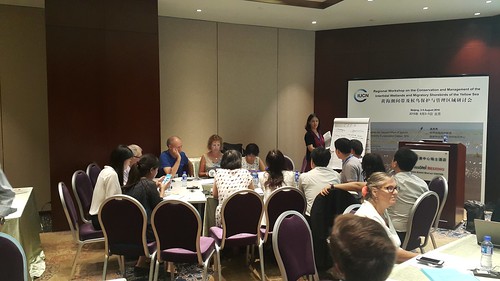 At a recent meeting in Beijing on Yellow Sea intertidal areas, Korean and Chinese experts pushed for the idea of an extended Yellow Sea tidal flats World Heritage nomination, building on the initiative of the Korean team. The idea was broadly welcomed and discussions ensued about how to set about this through a serial site nomination process, i.e. beginning with some sites and then extending to others as they become identified and added. The process, of course, is not easy, and will take time, but the concept generated a great deal of enthusiasm, and early steps are being taken. 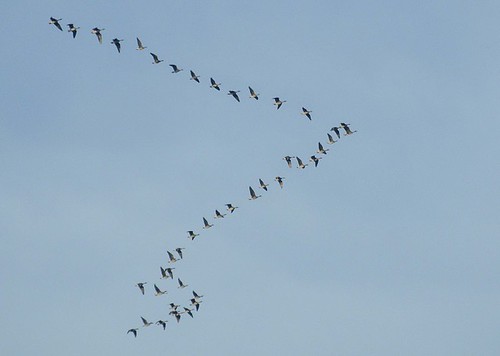 Geese Anser spp. flying in a V-shaped formation over the EAAFP Secretariat building in Songdo, Republic of Korea © Eugene Cheah

World Heritage is primarily based on physical sites, either natural or cultural, such as buildings and monuments. However, there is a category of cultural World Heritage that is not site-based and concerns “intangible” cultural heritage, such as traditional social practices, performing arts, rituals and oral traditions. The making of kimchi in both Republic of Korea and Democratic People’s Republic of Korea is an intangible cultural heritage. I am far from being an expert on world heritage, but this got me thinking about bird migration. Can this not be thought of as an intangible natural heritage? Sure, migration depends on protecting and managing key sites, for breeding, stop-over and non-breeding, spread over many countries. And indeed, for the Wadden Sea, there is a concerted effort to link to breeding and non-breeding areas. But what of the plaintive calls of high-flying flocks of curlews migrating across the night skies? Or the skeins of wild geese arriving in the harvested paddy fields? These are sights and sounds that many generations of people have experienced and associated with changing seasons and found inspiring. There are strong cultural attachments to the appearance of cranes at traditional sites. These are natural, and indeed cultural, values that must be protected “for future generations to appreciate and enjoy”. What an immeasurable loss would be the empty skies and silent shorelines of a vanished waterbird migration!