By Ade Long of BirdLife International

A new study published in Science has called for a greater international collaborative effort to save the world’s migratory birds, many of which are at risk of extinction due to loss of habitat along their flight paths. 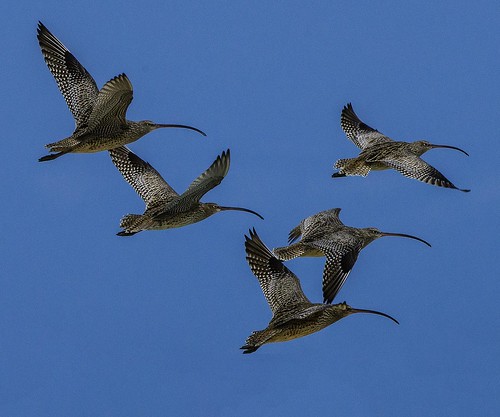 Far Eastern Curlew (Numenius madagascariensis) ? Dirk Hovorka; Breeding in Siberia, and migrating to spend the non-breeding season in Australia and New Zealand these birds are suffering rapid declines from loss of intertidal stopover habitats due to reclamation activities in the Yellow Sea region of the East Asian-Australasian Flyway owing to urban, industrial and agricultural expansion.

More than 90 per cent of the world’s migratory birds are inadequately protected due to poorly coordinated conservation around the world.

The research, which included using BirdLife International’s data on migratory bird distributions and Important Bird and Biodiversity Areas (IBAs), found huge gaps in the conservation of migratory birds, particularly across China, India, and parts of Africa and South America. This results in the majority of migratory birds having ranges that are well covered by protected areas in one country, but poorly protected in another.

“More than half of migratory bird species travelling the world’s main flyways have suffered serious population declines in the past 30 years. This is due mainly to unequal and ineffective protection across their migratory range and the places they stop to refuel along their routes,” says lead author Dr Claire Runge of Centre of Excellence for Environmental Decisions (CEED) and the University of Queensland (UQ).

“A typical migratory bird relies on many different geographic locations throughout its annual cycle for food, rest and breeding. So even if we protect most of their breeding grounds, it’s still not enough – threats somewhere else can affect the entire population,” she says. “The chain can be broken at any link.”

Co-author Dr James Watson of CEED and UQ explains that these birds undertake remarkable journeys navigating across land and sea to find refuge as the seasons change, from endurance flights exceeding 10,000 kilometres by Bar-tailed Godwits to the annual relay of Arctic Terns, which fly the equivalent of the distance to the moon and back three times during their lives.

Other examples include the Sooty Shearwater which flies 64,000 kilometres from the Falkland Islands/Islas Malvinas to the Arctic, and the tiny Blackpoll Warbler, which flies for three days non-stop across open-ocean from eastern Canada to South America.

For migratory bird species listed as threatened on the IUCN Red List by BirdLife International, less than three per cent have sufficient protected areas. “For example, the Red-spectacled Amazon—a migratory parrot of Brazil—is threatened by habitat loss,” says Dr Stuart Butchart, Head of Science at BirdLife International and a co-author of the study. “And yet less than four per cent of its range is protected, and almost none of its seasonal breeding areas in southern Brazil are covered.” 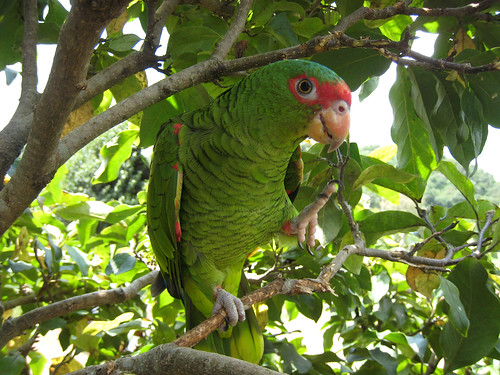 Red-spectacled Amazon (Amazona pretrei) ? Hamadryades; Less than 4% of its range (and almost none of its seasonal breeding areas) in southern Brazil is protected. For further information, see http://www.birdlife.org/datazone/species/factsheet/22686251

IBAs need more protection The team also examined over 8,200 Important Bird and Biodiversity Areas that have been identified as internationally important locations for migratory bird populations. They found that just 22 per cent are completely protected, and 41 per cent only partially overlap with protected areas.

“Establishing new reserves to protect the unprotected sites – and more effectively managing all protected areas for migratory species – is critical to ensure the survival of these iconic species,” Dr Butchart adds.

Co-author Associate Professor Richard Fuller of CEED says the results highlight an urgent need to coordinate protected area designation along the birds’ full migration route: “For instance, Germany has protected areas for over 98 per cent of the migratory species that pass its borders, but fewer than 13 per cent of its species are adequately protected across their global range.

“It isn’t just a case of wealthy nations losing their migratory birds to a lack of protection in poorer nations. Many Central American countries, for example, meet the targets for more than 75 per cent of their migratory species, but these same species have less protected area coverage in Canada and USA.”

While protected areas are usually designated by each country, collaborative international partnerships and inter-governmental coordination as well as action are crucial to safeguard the world’s migratory birds.

“It won’t matter what we do in Australia or in Europe if these birds are losing their habitat somewhere else – they will still perish. We need to work together far more effectively round the world if we want our migratory birds to survive into the future,” Dr Fuller says.

Roosting Bar-tailed Godwit (Limosa lapponica) ? Dirk Hovorka; Resting after undertaking some of the longest endurance flights in the world (>10,000 km).

The study was led by the ARC Centre of Excellence for Environmental Decisions (CEED).

To see Chief Executive of EAAFP’s words on the matter, click here.