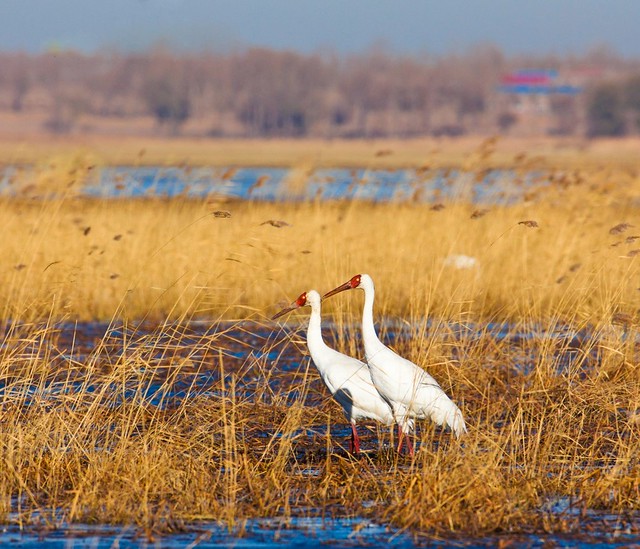 Siberian Cranes and many other waterbirds of northeast China depend on diverse wetlands that change through time. Photo by © Pan Shengyu

Along the greatest of the world’s crane flyways, six species of cranes cross the semi-arid landscapes of northeast China where rainfall is variable and unreliable. The cranes follow a tension zone — water-hungry croplands to the east give way to grasslands and desert to the west, historically home to nomadic herdsmen.  Yet for millennia the cranes have found wetlands along these margins where they can pause and rest.

Recent decades have brought massive water infrastructure moving water away for irrigation, industrial development, and growing cities.  Vast wetlands have been converted to rice paddies or cornfields while remaining habitats may no longer receive historic water inflows from snowmelt and late summer monsoons.  Fortunately, the Chinese government has established a network of wetland nature reserves extending north and south along the flyway to protect extensive landscapes for cranes, five species of geese, over thirty shorebird species, and a wealth of other waterbirds.

Given the diminishing extent of wetlands, and the peculiar challenges of wetland management in dry regions, the future of the region’s waterbirds will depend on effective management or restoration of remaining wetland resources. Given the significant role wetlands play in water supply and flood control, sound wetland management is also vital for human communities. During recent years, the Chinese government has invested major funding for wetland ecological compensation, and initiated removal of illegal structures and activities from core zones of key wetland type nature reserves. These actions provide a good opportunity for enhancing wetland management through imitating historical hydrological conditions. 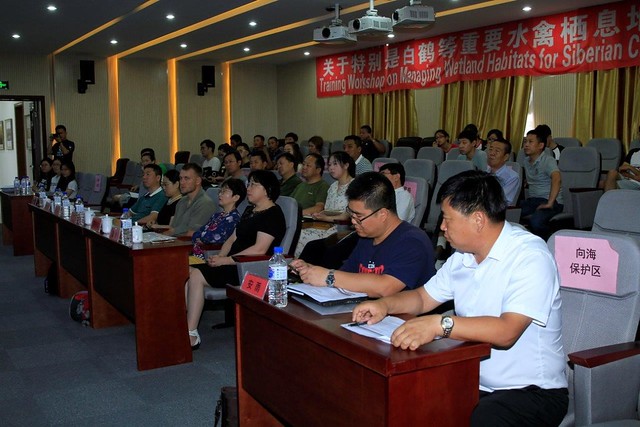 Representatives from nine wetland nature reserves participated in this workshop that related wetland waters, soils, vegetation and invertebrates to practical management measures, as a basis for waterbird conservation. Photo by © Li Lianshan.

The International Crane Foundation (ICF) and the National Bird Banding Center (NBBC) of China, working with Xianghai National Nature Reserve in Jilin Province, held a workshop, “Managing Wetland Habitats for Siberian Cranes and Other Important Waterbirds” from August 2-6, 2017. Indoor lectures alternated with field trips to nearby wetlands of Xianghai Nature Reserve, while instruction was shared by Chinese and American experts. The ecology of wetlands, and potential management tools and methods, are surprisingly similar between northeast China and the dry interior west of the United States.  ICF brought three Americans to help lead the workshop and provide advice on wetland issues:  Sammy King, a wetland scientist with the U.S. Geological Survey and Louisiana State University; John Vradenburg, a wetland manager who serves as Supervisory Biologist for the Klamath Basin National Wildlife Refuge Complex with the U.S. Fish & Wildlife Service; and Drew Fowler, a Ph.D. candidate at the University of Missouri with expertise in soils.

Sixty-five people attended the opening day presentations, while the more technical sessions on days following involved 25 managers and researchers representing 9 nature reserves along this flyway. Perhaps to the surprise of participants, the workshop gave much emphasis to soils in the wetlands to be managed. The soils vary remarkably even across short distances and reveal the dynamics of water flow and salt movement not only at present but back through history of the site. Generally, wetlands should be managed to the extent possible to reflect how they functioned before human interventions; the soils are a guide to the past. 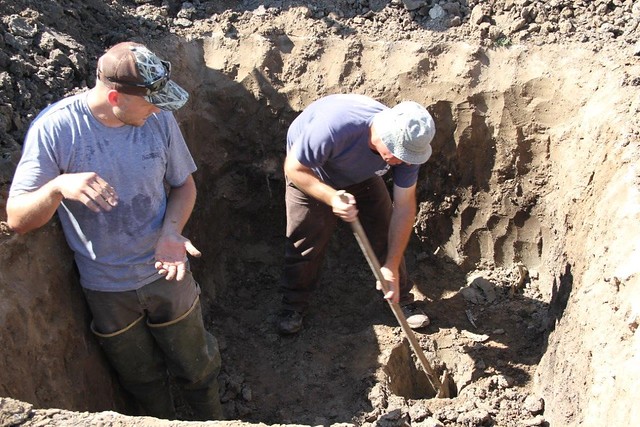 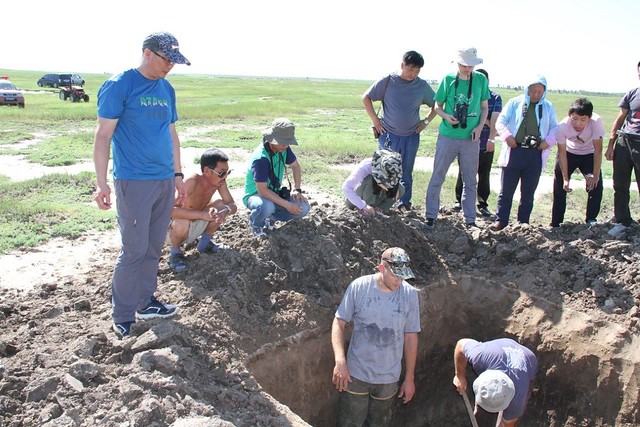 Soil pits prepared for our workshop in the floodplain of Huolin River provided vital information about these wetlands through time and clues to the best management regime for the future. Photos by © Sammy King.

While wetland managers typically focus on water supply, other factors also have great importance.  Since evaporation in semi-arid regions exceeds rainfall, salts left behind have huge influence on wetland ecology; where ignored, salt build up can leave wetlands barren, with little value for wildlife or people.

People tend to visualize an ideal state for a wetland – we may imagine mixed open water and emergent or floating water plants with plenty of birds.  Management may attempt to stabilize water although wetlands by their nature are highly variable and here depend on extremes of drought and flood – wetlands need to dry out regularly. With stable water, plant succession leads to thick growths of long-lived plants – reeds and cattails in this region.  Dense stands of reed have much less waterbird value than a diversity of plant species that germinate when the soils are exposed to air and then water returns after a dry period. 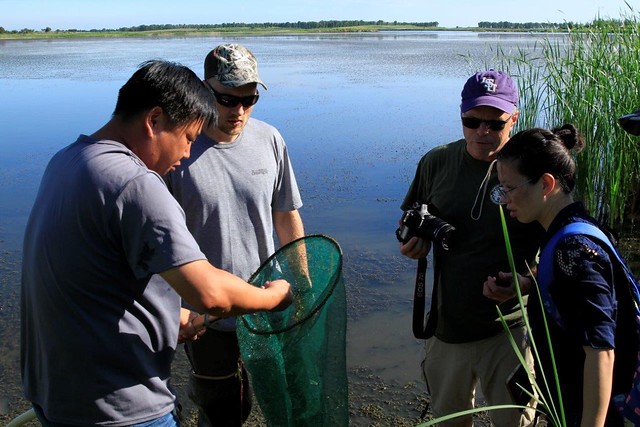 We used dip nets to investigate invertebrates, primary food for many waterbirds. With stable water conditions over time, diversity and abundance of wetland invertebrates decline. Photo by © Li Lianshan.

Wetland landscapes at Xianghai and other nature reserves of the region offer remarkable opportunities.  To experienced eyes – indeed, to workshop participants by the end of the week — the old flood plains and water channels are visible to guide management measures. The Americans advocated small steps at first, as management at its best is a learning process and can later be scaled up.  ICF intends to work with NBBC, Xianghai and other sites to demonstrate these holistic and prudent approaches to wetland restoration with an emphasis on site features and opportunities.  The benefits will go far beyond cranes.