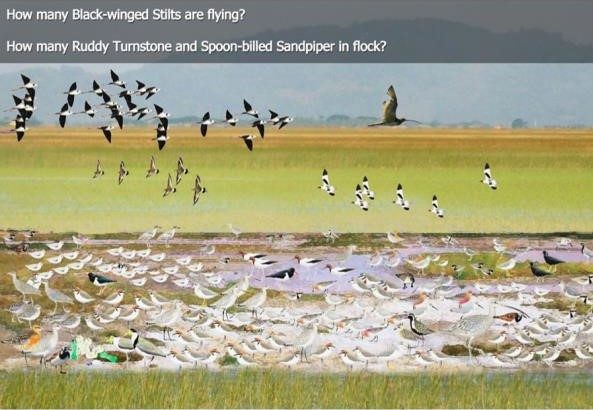 Event 1 “Participating, Answering Quizzes and Win Prizes on WMBD”
This year, NCS-Myanmar organize event using Facebook page of NCS-Myanmar and YouTube. As the event is conducted on online, the targeted participants are conservationist, Bird Watchers, Bird Photographers, Bird tour guides and other peoples who are interested in nature. Facebook link [here].

From the 24th of April 2020 to the 20th of May, 47 posts (including original posts and share posts) were posted on NCS-Myanmar Facebook Page. Two short videos (Myanmar and English version) of Flyway Network Sites in Myanmar was uploaded on YouTube and share from NCS-Myanmar Facebook Page. Out of 47 posts, 6 posts were boosted by paid including NCS-Myanmar Main Page. General analysing was conducted from Facebook Insight from 22nd of April to 19th May 2020: 3299 page likes, 122,241 people reached, 18639 engaged, 2751 views, 3350 new likes, 124.8 new likes on daily average. 2. Photo Contest
In the photo contest of World Migratory Birds day 2020, 34 migratory bird photos were received from bird photographers and nature tour guides. As during Stay At Home of Covid-19 period, most of photographers could not go outsides to take photos of birds, but they sent the birds phots these were taken before Stay At Home of Covid-19. The six photos were selected and announced on the Facebook Page and the prizes were sent to them via DHL express. The awarded photos are followings: 3. Short video of WMBD 2020
Some photos and video clips were requested from participants and other conservationist, and partners. Some interview clips were requested from site managers from (NWCD) Nature and Wildlife Conservation Division, Ministry of Natural Resources and Environmental Conservation. The video was edited two versions with English language and Burmese Language. The video was uploaded on YouTube and shared it on NCS- Facebook Page. The short video length is 6 minutes and 34 seconds.