Eaaflyway > All News > Welcoming the migratory bird for the first time at Paleik Lake in Mandalay region, central Myanmar 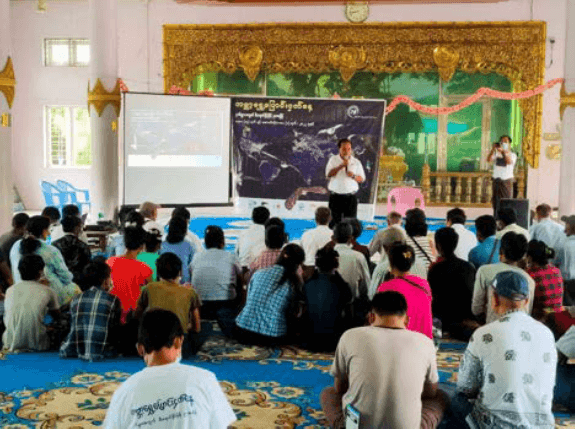 On 1 October 2022, Biodiversity And Nature Conservation Association collaborated with the Shwe Kantharyar Nature Conservation Association, a community- based organization in Pyu Lake, and celebrated the first time of world migratory bird day event at the temple in Paleik village in Paleik village tract near the Paleik Lake is situated at the Singaing township, Kyaukse district in Mandalay region, central Myanmar. 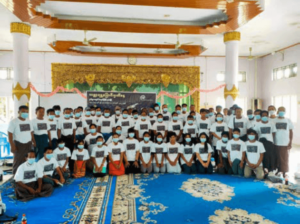 In fact, the Paleik Lake is one of the priority wintering sites for Baer’s Pochard – a critically endangered species – in Myanmar and the site provides unique riverine ecosystem services: provision services and supporting services to biodiversity and communities. The main threat for waterbirds there is bird hunting, done through traps set in aquatic plants and poison made by mixing Potassium Cyanide and seeds from the bud of water hyacinths (Eichhornia crassipes). The hunted birds are sold for subsistence income and daily food consumption. Additionally, local farmers often scare waterbirds with nets and shoot them with catapults because of the small plants (seedlings) the birds destroy.

The event’s objectives, therefore, were to raise the knowledge bar about the value of wetlands and migratory species and balance to use the wetland resources by humans and wintering birds at the Paleik Lake. A total of 60 participants from all walks of life: 35% are farmers and 65% are laborers warmly welcomed the events. 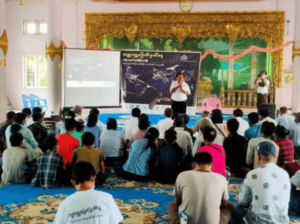 At the events, we gave a speech about the wetland ecosystem services, its biodiversity and facing threats, challenging the migratory water bird species through the flyway and impact of light pollution in living organisms. Meanwhile, we distributed pamphlets on the value of inland wetlands and information on the water bird species recorded at Paleik Lake, and T shirts which had the WMBD slogan: “Dim the light for birds at night” to participants. 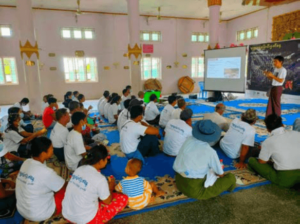 Presentation on the value of wetland ecosystem services, its biodiversity and  threats by Thaw Phyo Shwe, a field coordinator at BANCA ©️ BANCA

After the event, we organized a small meeting with local farmers and formed the local conservation group for conserving the inland wetland and its biodiversity in Paleik Lake. The local people living around the Paleik Lake realized the importance of inland wetland ecosystem services and the value of conserving migratory water bird species as well as the impact of wetland degradation and light pollution to human and living creatures through the World Migratory Bird Day Event.

The event put into effect the internationally important sites designation such as the Ramsar site and East Asian Australasian Flyway sites though the community engagement in Paleik Lake, central Myanmar. Furthermore, we have taken the first step to create long-term conservation activities on the inland wetland and its biodiversity especially the Baer’s Pochard and migratory water bird species through forming the local conservation group. The LCG namely is Paleik Lake Nature Conservation Association with twelve members: three are guardians and nine are members who are farmers and living around in Paleik Lake. 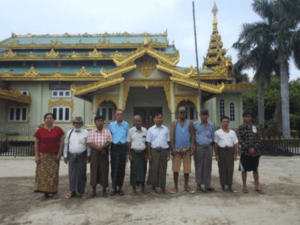