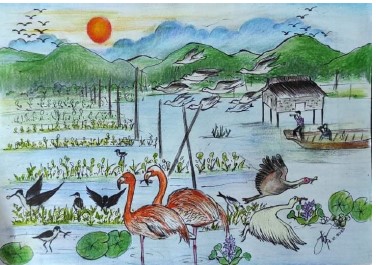 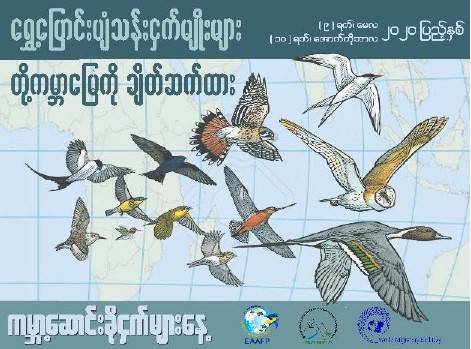 BANCA celebrated World Migratory Bird Day October 2020 Event through BANCA’s Facebook Page to protect the spread of the COVID-19 pandemic within communities in Myanmar.
The event was started from 1st to 10th October and conducted with mainly five activities engaging with bird watchers, bird tour guides and also birds and nature lovers from Government Departments, University, other people who love painting and poem writing. Before the event, activities to be held at the event were published not only on BANCA’s Facebook page but also in newspapers and journals.

Activity: 1 Uploading Post on BANCA Facebook Page
From 1st to 10th October 2020, 8 posts were posted on the page by using hashtags. These were;
(1) History of World Migratory Bird Day and objective of this year theme,
(2) Global Flyways, 2 Flyways passing through Myanmar and Flyway Network Sites in Myanmar,
(3) Bird Migration,
(4) Bird Feeding,
(5) Threats on Migratory Birds
(6) About IUCN Red List and Threatened Bird Species
(7) Important Birds and Biodiversity Areas (IBAs) in Myanmar
(8) Benefits of Birds and how to involved in conservation activities by their selves. In the second wave of COVID-19 pandemic from the local transmission in Myanmar, there has been reached to at least 800 cases per day. Therefore, celebrating World Migratory Bird Day in October 2020 by BANCA in Myanmar was highly efficient to control the pandemic and got engagements to the event’s activities from participants.
In this event, these uploaded posts were enhanced to participant’s knowledge and they showed their interests by leaving gratitude comments and sharing posts to their accounts, groups and pages with birds and nature lovers.

Activity: 2 Painting Contest
The information of the painting contest was announced on BANCA Facebook Page with the objective of the contest to protect migratory birds and their habitats and to be involved public in conservation activities. With the announcement for the contest, rules and participants and prizes were also described in detail to be transparent to participants. During the period of contest from 1st to 7th October 2020, 26 contestants involved including 10 years old school children and ages between 18 to 50 years old. The 3 winners were
selected by BANCA relevant with the objective of the contest and a popular award was selected by people from Facebook and announced on World Migratory Bird Day. 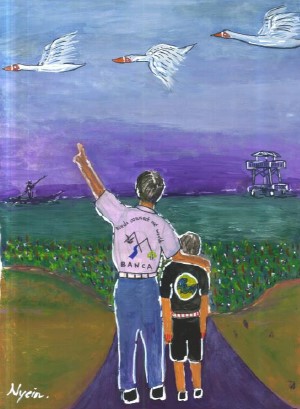 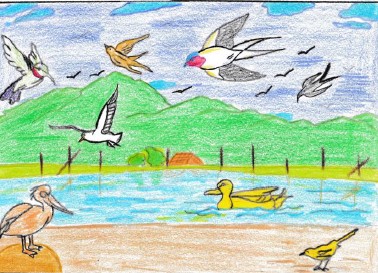 Activity: 3 Poem Writing Contest
The information of the poem writing contest was announced like that painting contest with the same objective. This contest was interest among people who love poems and nature. Therefore, during the period of contest from 1st to 7th October 2020, over 130 people involved including the ages between 16 to 65 years old. BANCA put an effort to select the best winners from a lot of contests. BANCA selected 3 winners namely first, second, third award relevant to the objective of the contest. The best 5 consolation awards were selected as many contestants involved in the contest and a popular award was selected by people from Facebook and announced the next day (11th, October, 2020) after World Migratory Bird Day.
As for popular awards of these two contests, all of the arts of contested were posted through BACNA Facebook Page and the winner who got the most likes and react in post received this award. This is such a kind of popular activity for choosing an award on Facebook and this make people to engage happily.
These two contests were boosted by paid through BANCA Facebook Page. The event’s activities were interested in media channels such as radio station, Newspapers, and Facebook pages interviewed to BANCA about the event then announced to the public.
The prizes for all of the winners were sent with the certificate, printed vinyl of their arts, and other souvenirs after the event within 12 days. 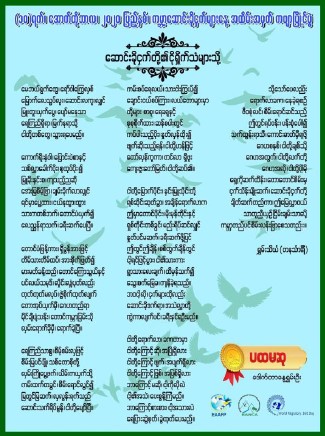 Activity: 5 Bird Quizzes
The activity was announced with rules and principles before starting it through BANCA Facebook Page. 10 quizzes were posted per day from 5th to 9th October 2020 at 1:00 PM and people left the answers in the comment box. In each quiz, at least 30 people answered with great efforts to be winner. The winners who replied the right answers in first to Page’s comment box were announced shortly after finishing the questions for a day. The prizes of the World Migratory Bird Day T-shirt were sent to winners within a week, then they expressed their gratitude to BANCA through the message box of BANCA Facebook Page. They are satisfied with their prizes and some are posted proudly to their Facebook accounts.
Prizes and souvenirs decorated with only bird photos to be remembered the event and to engaged more in further conservation on migratory birds. 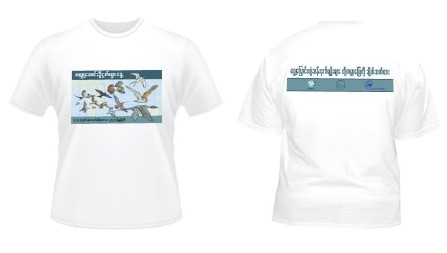 Three activities were boosted by paid during the event, the results are as follows;
– Activity: 2 Painting Contest, 53,040 reached, 2,092 engaged, 1.4 k likes in this post.
– Activity: 3 Poem Writing Contest, 104,962 reached, 3,432 engaged and 1,500 k likes in this post.
– Activity: 5 Bird Quiz, 46,842 reached, 1814 engaged, 520 likes in this post.
According to the analysis from page insight from 1st to 10th October 2020, 184 new likes, 2,932 engaged, 42,832 reached on a daily average in the event.
This event was done well with the engagement of people who love birds and nature and can measure the awareness level of endangered specis among the public through online. This event’s activities were promoted their knowledge about migratory birds conservation and had fun and engaged in the event’s activities during their stay at home period.