Eaaflyway > News > Why are we losing our large waders?

Why are we losing our large waders?

A review of the global threats to the world’s Numeniini (curlews, godwits & Upland Sandpiper) has just been published. It does not make for good reading.

It is estimated that hundreds of thousands of Eskimo Curlews were migrating the full length of the two American continents 150 years ago – but the species is now probably extinct. The Slender-billed Curlew, its old-world cousin, is elusive at best and extinct at worst. According to the most recent global figures (as reported to the Convention on Migratory Species 11th Conference of the Parties, details below), there are estimated to be only 10,000 remaining Bristle-thighed Curlews, 32,000 Far Eastern Curlews and 77,000 Hudsonian Godwits. Why are we losing our large waders?

The perilous plight of members of the curlew family has been highlighted in WaderTales before (see Is the Eurasian Curlew really near-threatened and Dutch Black-tailed Godwit numbers down by nearly 75% for instance). Now, a group of wader/shorebird experts have analysed the wider conservation concerns for this group of large, long-lived waders. In a new review in Bird Conservation International, scientists ask if there are shared threats to the Numeniini (the Upland Sandpiper, eight curlews and four godwits). Can their findings help to explain why so many of these 13 species are at risk or, in the case of the Eskimo Curlew and Slender-billed Curlew, probably already extinct? 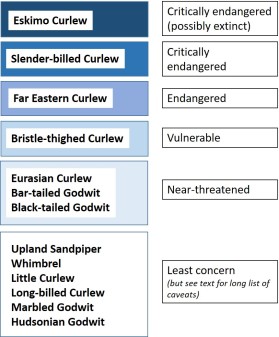 The Numeniini waders span the globe. In the table alongside you can see that the conservation status of the group covers the full range of possible levels, from Eskimo Curlew, the last definite report of which was in 1963, to six species that are listed as being of ‘least concern’ (IUCN criteria). Even these six species are far from safe, according to a new review undertaken by 35 authors, supported by expert opinion from a further 80 shorebird ecologists. The drivers that have led to the declines of several endangered and vulnerable species are already affecting others that are currently categorised as being of ‘least concern’. There’s more about these important caveats further down this blog.

The crisis for the Numeniini is worrying wader biologists, ornithologists and ecologists – and some governments. They are working together to share information, identify gaps in knowledge, drive forward new research and to push for conservation activities that can reduce the pressures on these species, and others that share the same habitats. A key output is a newly-published paper, led by the British Trust for Ornithology’s James Pearce-Higgins but with authors from almost 30 organisations across five continents, who collated knowledge from over 100 experts: 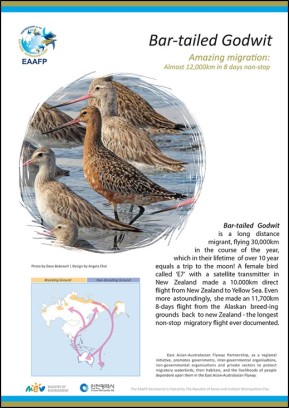 There is already a great deal of concerted international action to save Numeniini species. This flyer was produced by the East Asian-Australasian Flyway Partnership

A model for collaborative conservation research

Identifying the causes of the problems of the Numeniini is not easy. Species such as the Little Curlew breed in some of the most remote areas of the world, whilst the wintering areas of Bristle-thighed Curlews are spread across the Pacific islands. Understanding the full annual cycle requires international cooperation, willingly provided by scientists and volunteer ornithologists who share a common concern about these species.

One of the key elements of the paper-production process was a workshop at the 2013 International Wader Study Group conference in Wilhelmshaven, Germany. This was led by Nicola Crockford, Principal Policy Officer at RSPB, James Pearce-Higgins (BTO), Daniel Brown (RSPB), David Douglas (RSPB) and Jennifer Gill (University of East Anglia). It was preceded by a questionnaire survey of experts throughout the world, conducted by Daniel Brown and funded by RSPB. This two-stage process brought together information relating to population trends, demographic parameters (e.g. nesting success and survival rates) and actual/potential conservation threats.

James, Dan and David refined the summary, bringing it together as a ‘Conservation Statements for Numeniini Species’ which was presented to the 11th Conference of the Parties of the Convention on Migratory Species in Quito, Ecuador in 2014 (CMS COP11). This report, authored by Daniel Brown, Nicola Crockford and Robert Sheldon and published on behalf of BirdLife International and the International Wader Study Group, is available here.

In the figure below you can see a snapshot of the range of information that is available in the Conservation Statements, in this case for Black-tailed Godwit . In particular, this COP11 document provided background information for two species for which CMS Concerted and Cooperative Actions were being proposed – Far Eastern Curlew and Bar-tailed Godwit. It also painted a backdrop to the CMS Programme of Work on Migratory Birds and Flyways. 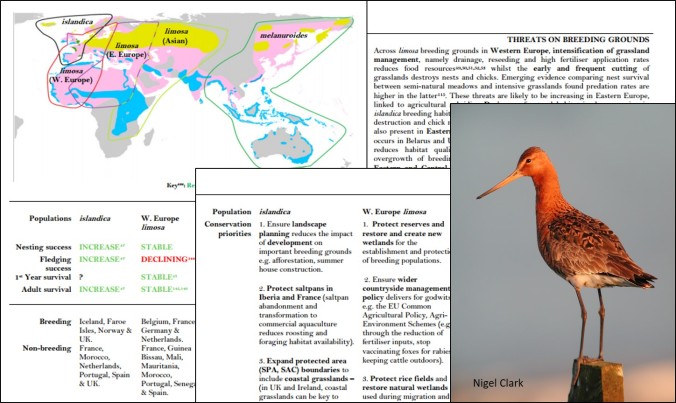 The new BCI paper aims to highlight the crises facing the Numeniini, to outline the suite of threats to the group and to promote this collaborative form of expert-led synthesis. It contains details as to how the questionnaire and workshop sessions were organised – information that will hopefully be of use to scientists studying other groups and taxa.

Findings of the review

In order to help inform conservation management and policy responses, James Pearce- Higgins and his collaborators have reviewed the threats that members of the Numeniini face across migratory flyways. They show that most threats are increasing in intensity. This is particularly the case in non-breeding areas, where habitat loss (resulting from residential and commercial development), aquaculture, mining, transport, disturbance, problematic invasive species, pollution and climate change were regarded as having the greatest detrimental impact. Fewer threats (mining, disturbance, problematic non-native species and climate change) were identified as widely affecting breeding areas.

Numeniini populations face the greatest number of non-breeding threats in the East Asian-Australasian Flyway, especially those associated with coastal reclamation. Related threats were also identified across the Central and Atlantic Americas, and East Atlantic flyways. Threats on the breeding grounds were greatest in Central and Atlantic Americas, East Atlantic and West Asian flyways. Based on these threats, several key actions were proposed: 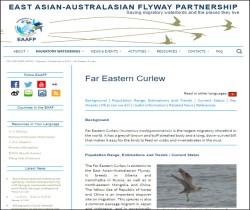 If implemented urgently, these measures, in combination, have the potential to alter the current population declines of many Numeniini species.

What is in the BCI paper?

As well as outlining a methodology which may well provide a template for the conservation of other groups of threatened species, the paper contains a comprehensive assessment of the global and local threats faced by the Numeniini. The discussion is the largest section – covering disturbance, development, pollution, terrestrial land-use change & predation, climate change impacts & mitigation, and hunting & harvesting. It provides an opportunity to assess the scientific evidence that supports expert opinion and usefully acknowledges some key gaps worthy of further investigation (e.g. drivers of change in the Central Asian Flyway and uncertainty over the population-level impacts of disturbance). 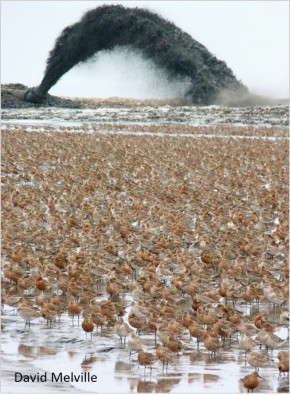 Bar-tailed Godwits in the Yellow Sea. Another large slice of mudflat disappears as a new sea-wall is built. © David Melville

To summarise in a few bullet points:

Quite why population declines are so common and severe in the Numeniini group is not yet clear but their large body size, low breeding rate and a consequent reliance on high annual survival rates may make them particularly vulnerable to changes in land use and habitat availability across their migratory ranges. The authors hope that this publication will provide a platform for the necessary research and monitoring, to identify and address specific threats, and that continued international collaboration will help this process.

The phrase ‘Least Concern’ may be misleading. Although half of the species covered in this review (6 out of 13) are still classified by IUCN/BirdLife as being of ‘Least Concern’ there are important caveats for these species within the COP11 report. Bar-tailed Godwit was classified as ‘Least Concern’ until a few months ago, when a major, sudden drop in adult survival for two populations (menzbieri & baueri) using the East-Asian Australian Flyway was reported. The current list of ‘Least Concern’ species is:

Whimbrel – Up to nine subspecies have been described, four of which are declining in number. Demographic trends are completely unknown for five subspecies.

Little Curlew – Population is only 180,000 and numbers may be declining.

Long-billed Curlew – Numbers appear to be stable (only 160,000) but there have been previous extinctions in 7 US states and large parts of Canada. 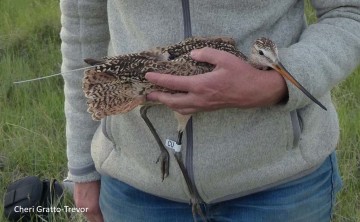 Marbled Godwit – Only an estimated 174,000 individuals remain. Two of the three

Satellite-tracking is being used to establish migration routes and stop-over areas for several members of the Numeniini. This is a Marbled Godwit.

breeding populations are made up of only 2,000 individuals each.

Hudsonian Godwit – Only an estimated 77,000 remain, with a decline in the major Canadian population, where there has been reduced nesting & fledging success.

These caveats suggest that none of the 13 species of Numeniini can be considered to be safe. The fact that the threats to the six species of ‘Least Concern’ are the same ones that have driven the other seven species further up the ‘endangered’ scale – and even to extinction – is extremely worrying.

You can read the full paper here: