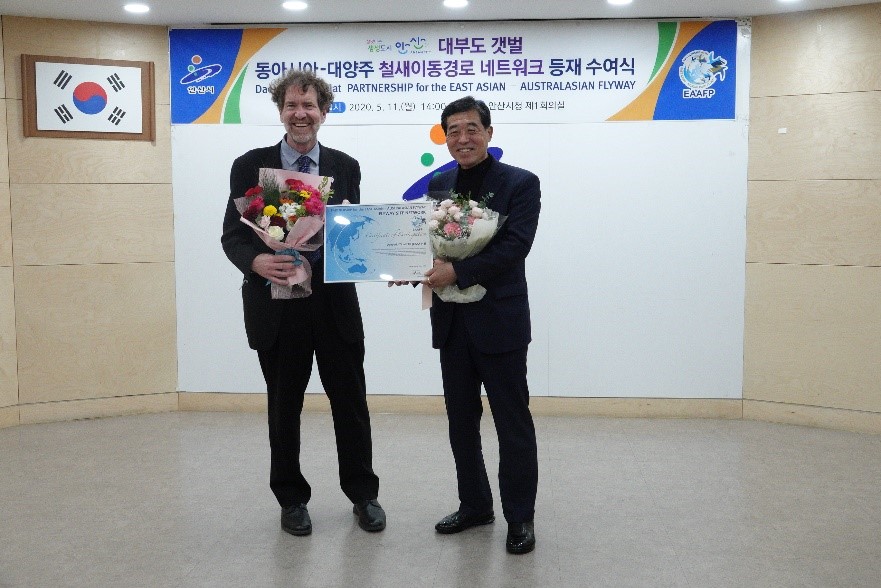 On May 11 2020, a ceremony was held for the new Flyway Network Site (FNS) Daebudo Tidal Flat (EAAF 148) in the Republic of Korea, which was officially included in the EAAFP Flyway Site Network on May 9 2020, in celebration of the World Migratory Bird Day. Chief Executive, Mr. Doug Watkins and staff members of the EAAFP Secretariat met with Ansan City government officials, including the Ansan Mayor, Mr. Yoon Wha-Sub, site managers as well as the Ansan Evergeen Foundation CEO, Mr. Jeon Junh. In his ceremonial speech, Ansan Mayor Mr. Yoon Wha-Sub announced his renewed commitment to conserving waterbirds and managing the flyway network site in collaboration with the international community. To conclude the ceremony, Mr. Doug Watkins, Chief Executive of the EAAFP Secretariat, presented the nomination certificate to the Ansan Mayor, and sourvenirs were exchanged.

Ansan City recognizes the importance of protecting migratory birds and the habitats they are dependent upon. The Chinese Egret was officially classified as endangered by IUCN and Birdlife International on January 11 2013 and following this measure, Ansan City designated the Chinese Egret as the City’s Bird. In line with the nomination of Daebudo Tidal Flat to the Flyway Site Network, Ansan City also implemented a citizen science program, where citizens can join the monitoring of migratory waterbirds. The program aims to both improve the collection of migratory waterbird data and engage the local community.

Another potential threat to the FNS is the invasive Spartina cordgrass. Back in 2018, the Ministry of Ocean and Fisheries implemented a  2019 – 2023 5-year management plan to control the Spartina population, an invasive exotic plant species found in many locations around the Yellow Sea region including this newly designated Daebu Tidal Flat. Dubbed the “destroyer of tidal flats” in Korean, Spartina species proliferate in dense colonies across tidal flats, and can lead to the loss of native saltwater species and the total conversion of mudflats to terrestrial land in short time if left uncontrolled. The primary objective of the management plan is to control and prevent dispersal of the species by preventing the expansion of large patches and controlling and terminating small patches of the species. Other aspects of the management plan include monitoring the spatial-temporal distributions of the invasive species and making legal and institutional revisions to the management of invasive species.

During the discussion, the EAAFP Secretariat agreed that with the support of other collaborators / experts in the flyway, it will provide the necessary contributions to enhance the site’s public awareness and capacity. Photos and additional information about the site can be found on https://www.eaaflyway.net/rok/ and https://www.flickr.com/photos/eaafp/albums/72157714188653523