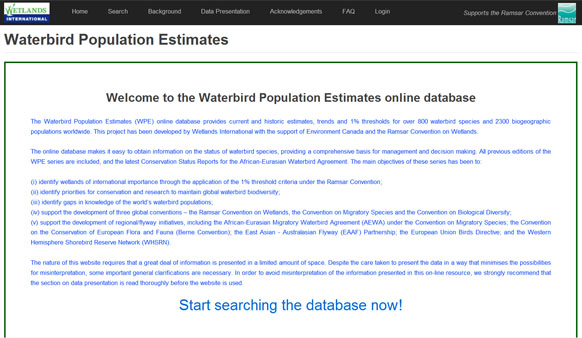 The Waterbird Population Estimates (WPE) online database has recentlybeendeveloped by Wetlands International with the support of Environment Canada and the Ramsar Convention on Wetlands.The WPE online database provides current and historic estimates, trends and 1% thresholds for over 800 waterbird species and 2300 biogeographic population worldwide.
The online database makes it easy to obtain information on the status of waterbird species, providing a comprehensive basis for management and decision making. All previous editions of the WPE series are included, and the latest Conservation Status Reports for the African-Eurasian Waterbird Agreement. The main objectives of these series has been to: (a) identify wetlands of international importance through the application of the 1 % threshold criteria under the Ramsar Convention; (b) identify priorities for conservation and research to maintain global waterbird biodiversity; (c) identify gaps in knowledge of the world’s waterbird populations; (d) support the development of three global conventions – the Ramsar Convention on Wetlands, the Convention on Migratory Species and the Convention on Biological Diversity; (e) support the development of regional/flyway initiatives, including the African-Eurasian Migratory Waterbird Agreement (AEWA) under the Convention on Migratory Species; the Convention on the Conservation of European Flora and Fauna (Berne Convention); the East Asian – Australasian Flyway (EAAF) Partnership; the European Union Birds Directive; and the Western Hemisphere Shorebird Reserve Network (WHSRN).