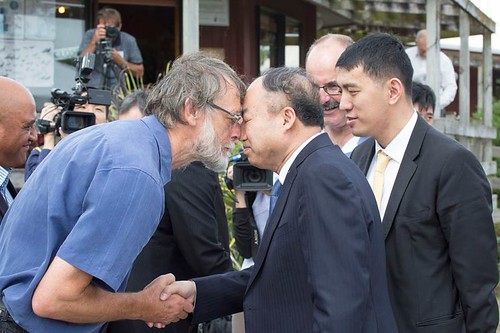 On the 18th of March it was a pleasure to host a visit by the State Forestry Administration (SFA) of China to the Miranda Shorebird Centre on the Firth of Thames [EAAF019], New Zealand. Vice Minister Chen Fengxue and delegation were in New Zealand to sign an Memorandum of Arrangement (MOA) with the Department of Conservation (DOC). The Department along with East Asian-Australasian Flyway Partners Miranda Naturalists Trust along with Ngati Paoa, the local Maori tribe formally welcomed Vice Minister Chen to New Zealand and introduced the delegation to the local community. The Director General of Conservation Lou Sanson emphasised the long and deep links between New Zealand and China as the basis of an ongoing commitment to work together for the conservation of Bar-tailed Godwits and Red Knots as they travel on their yearly migrations between New Zealand, China and the high Arctic. In his remarks to the invitees Vice Minister Chen highlighted the importance of the Bohai Wan for migratory shorebirds and identified the need for protected areas in this part of the Yellow Sea. The MOA was signed to general acclamation of all present and then the party moved down the road to watch the birds come into the high tide roost. Good numbers of godwits and knots were present as well as the New Zealand endemic, the Wrybill, and Pied Oystercatchers. A highlight for all was the departure of a flock of godwits from the roost heading high over the hills on the direct route for the Yellow Sea. The day ended with a dinner hosted by the Associate Minister of Conservation the Honourable Nicky Wagner and the Mayor for the Hauraki Council John Tregidga. 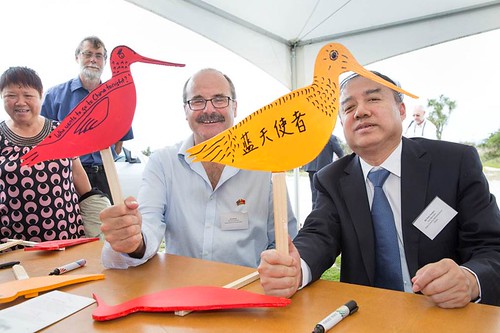 The visit to New Zealand by the State Forestry Administration is a highlight in our ongoing joint work to protect key sites for migratory shorebirds along the flyway. Working on the flyway requires effort at a number of levels and the work of the East Asian- Australasian Flyway Partnership in bringing together all parties to build relationships and a strategic framework is an essential prerequisite for successful bilateral engagement between countries. The signing of the MOA is the cumulation of a year’s effort by myself, colleagues in DOC and the New Zealand’s Ministry of Foreign Affairs and Trade and colleagues from the State Forestry Administration and is the beginning of a new chapter in our relationship. It will provide a framework to develop cooperative projects for the conservation of habitats and populations of migratory waterbirds between China and New Zealand. The challenge now is to make the Memorandum come alive with projects. 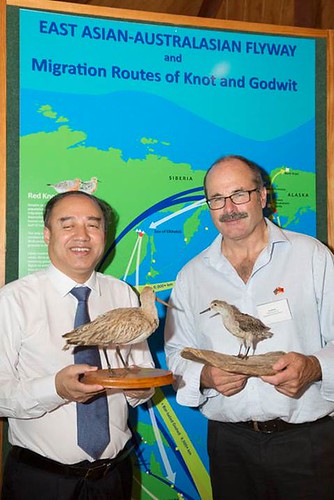 In amongst the words and the sharing of perspectives the seeing of a wheeling flock of Bar-tailed Godwits lifting off the roost and then settling back down and the chatter and noise of air of the feathers before a flock lifted off and headed not up the shoreline to another roost but inland across the hills on a direct line to the Yellow Sea was again a reminder and an inspiration of the magic of the story of migration and the need to work across the globe to ensure that this linking of all peoples together continues to endure for future generations.

MOA between DOC and SFA

This agreement is very significant for a number of reasons. Firstly, it recognizes the interdependence of sites very far apart, in China and New Zealand, for the continued migration and indeed survival of Red Knots and Bar-tailed Godwits in the Flyway. Secondly, it is a very important example of not just government – government cooperation and commitment, but also close cooperation of the government of New Zealand with an NGO, Pukorokoro Miranda Naturalists Trust and a private company, Fonterra, both working to save habitat of these species in New Zealand and also in China, where the Trust has a long history of cooperation with local government and the Yalu Jiang National Nature Reserve [EAAF043]. This kind of government-NGO-Private Sector partnership across countries should serve as a great model for other cooperative agreements to save migratory waterbirds in the Flyway. Thirdly, it recognizes the international importance of critical sites in New Zealand (Firth of Thames) and China (Yalu Jiang NNR and Luannan wetlands). The Luannan wetlands are currently unprotected and under severe threat of reclamation, so it is to be hoped that this historic agreement can lead to strengthened protection and management of the site. Congratulations to all involved!