Eaaflyway > All News > Vulnerability of food supplies for migratory shorebirds to altered flow in the southern Gulf of Carpentaria, Australia

Vulnerability of food supplies for migratory shorebirds to altered flow in the southern Gulf of Carpentaria, Australia

Migratory shorebirds are present in vast numbers along Australia’s Gulf of Carpentaria south-east coastline, especially from September to April. These shallow and productive tidal environments are important resting and feeding areas, as well as staging areas for birds that fly north or south. The threatened Great Knot and Far Eastern Curlew are among the many migratory bird species using the Gulf coast, and food and rest are vital to their continued survival. The south-east Gulf’s significance for shorebirds has been recognised through its inclusion in the internationally recognised East Asian-Australasian Flyway Site Network [EAAF120 and EAAF125].

Rivers flowing into the Gulf deliver freshwater, sediments and nutrients to estuaries and nearby coastal areas, nourishing the mudflats where shorebirds rest and forage for shellfish, crustaceans and worms. Developments that use significant water or changes in climate that alter river flows may therefore impact the survival of the shorebirds.

This project aims to quantify and compare the shorebird food resources produced by three Gulf river systems that flow alteration may affect – the Flinders, Gilbert and Mitchell Rivers. It will identify the relative importance of the estuaries and adjacent mudflats in terms of food resources for shorebirds. This information will inform future water planning, environmental impact assessments, and migratory shorebird habitat protection and management.

This project will:
• improve our understanding of the role of freshwater, associated nutrient loads and benthic animals in providing sufficient food of the right quality and quantity to support shorebird species
• inform water resource planning especially in the Flinders, Gilbert and Mitchell Rivers, and the environmental assessment of development proposals in the region
• improve shorebird habitat protection and management, for example through contributions to priority actions in the Australian Government’s Wildlife Conservation Plan for Migratory Shorebirds, to actions for the Far Eastern Curlew in the Australian Government’s Threatened Species Strategy, to priority actions in the Single Species Action Plan for Far Eastern Curlew and to the East Asian-Australasian Flyway Site Network
• help inform management of other relevant EPBC Act listed species and Ramsar wetlands

Project activities include:
• Examining previous reports on shorebird distribution, abundance and diversity in the region
• Sample the benthic organisms that provide food for shorebirds in the Flinders, Gilbert and Mitchell Rivers, in both the wet and dry seasons, to examine densities and diversity
• Assess key shorebird species’ food preferences, the kinds of food available relative to their needs, and what kind of developments are most likely to impact on shorebirds
• Analyse field and experimental data to determine how different flows affect densities of benthic organisms, and the implications for different shorebird species, eg. those with longer bills or shorter bills feeding at different depths in the substrate
• Compare the results to those from other studies in comparable locations

Further information can be found in the factsheet here. 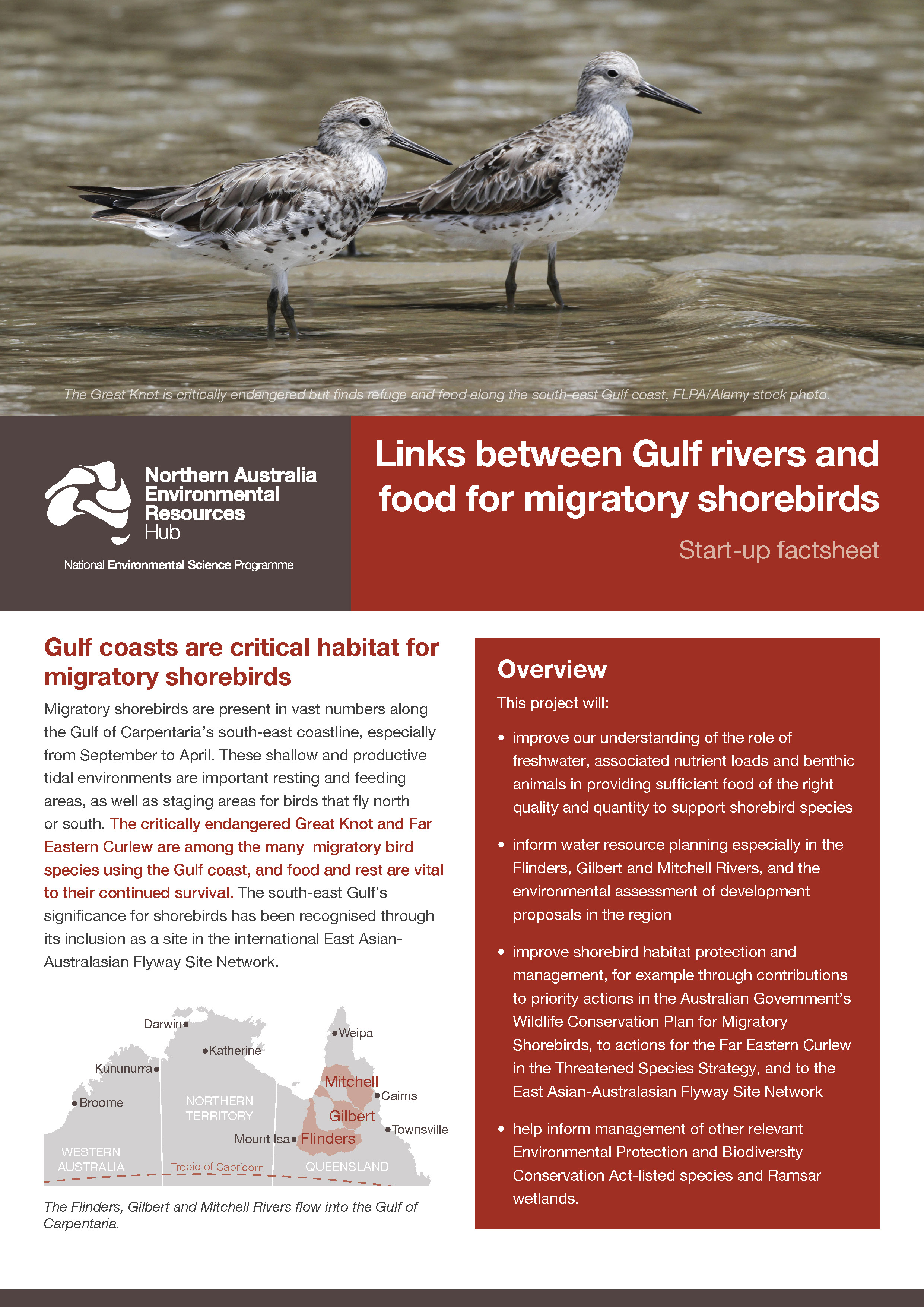 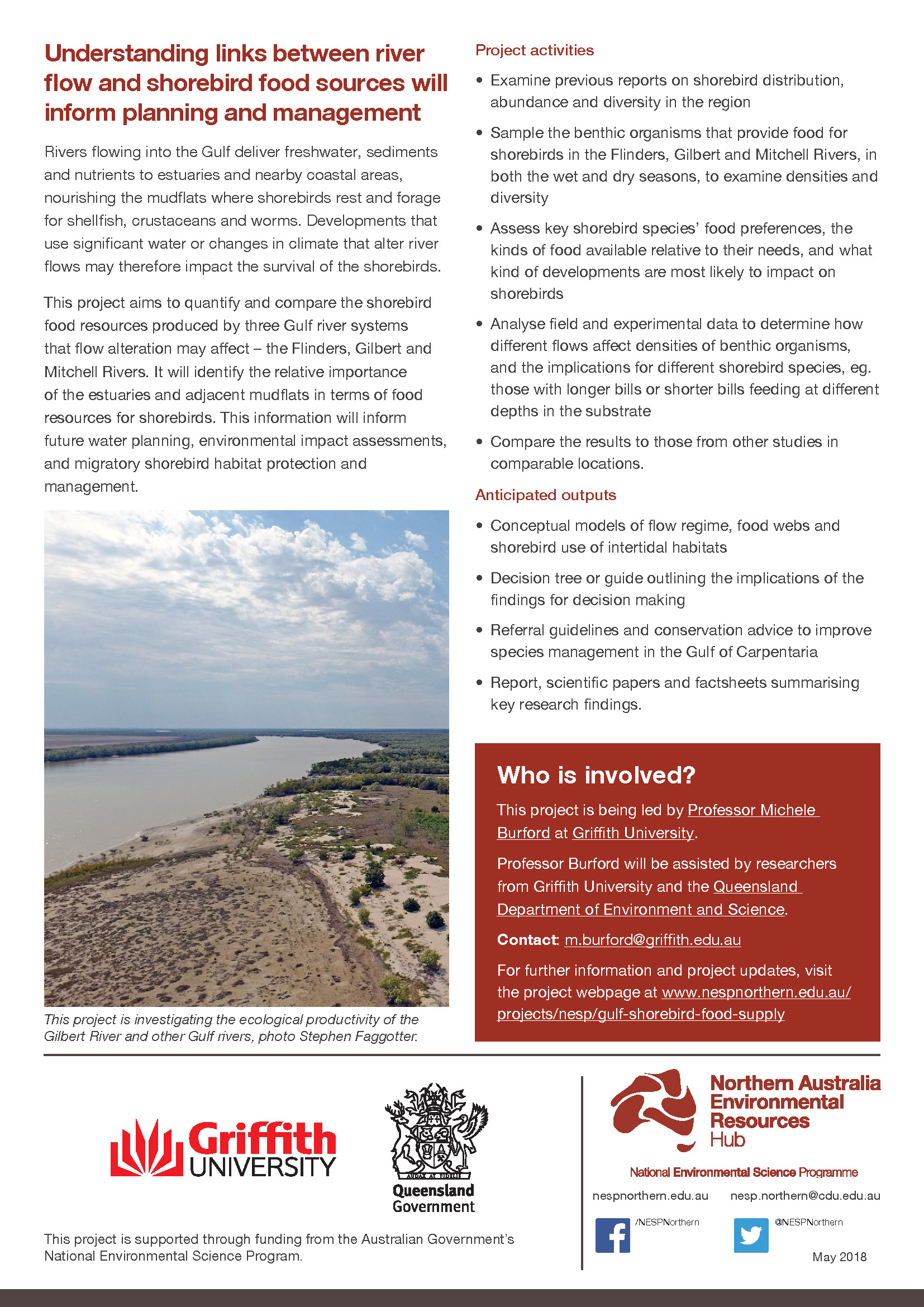