The United States has been a partner since 2006 and is home to 2 Flyway Network Sites, designated under specifications set by EAAFP.

Important for Shorebirds, Anatidae, and Others

Yukon Delta National Wildlife Refuge Flyway Network Site [EAAF109] is nearly 5,000,000 ha of extensive grass-sedge meadows in the deltas of the Yukon and Kuskokwim Rivers as well as estuaries, sea coast and an offshore island.

A regularly-surveyed area of 12,832 km2 (27% of site) within the Yukon Delta National Wildlife Refuge supports individuals of about 900,000 Waterbirds, including significant numbers of vulnerable and near threatened species such as Steller’s Eider, Spectacled Eider, Emperor Goose and Aleutian Tern. A well surveyed area of 2,200 km2 (<5%) of the site supports 915,000 shorebirds, including Bar-tailed Godwit, Dunlin, Pacific Golden-Plover, and Ruddy Turnstone. The Alaska National International Conservation Act states that the purpose of this abundant and diverse field of wetlands created by the combined deltas of Yukon and Kuskokwim, the two largest rivers of the Alaska, is to conserve numerous species such as waterbirds, seabirds, and other significant marine animals. 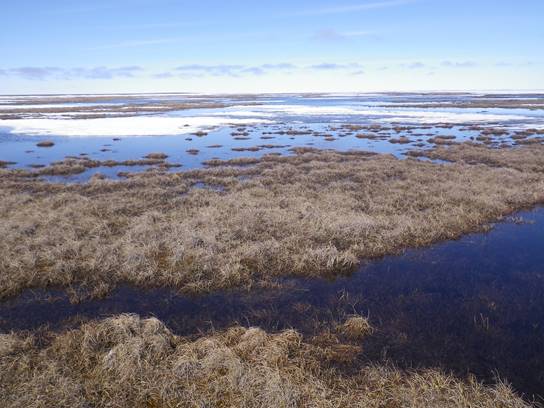 Important for Shorebirds, Anatidae and Others

For pages and posts on the EAAFP site related to United States follow search: U.S.