Eaaflyway > News > This Korean recipe could save Piper

This Korean recipe could save Piper

On the west coast of the Republic of Korea, there is a precious mudflat remaining in a sea of coastal concrete. Following a BirdLife team visit with a nature-tourism focused county government, we tell the story of Yubu Island [EAAF101], its people, its renowned cuisine, and its millions of birds

Military fighter jets fly regular sorties around our heads, each time causing thousands of shorebirds to take flight, whirling around in formation before landing to resume their frantic feeding. We look south through an otherworldly haze, where less than two kilometres away, rise the stacks and structures of a large industrial zone in the middle of the west coast of the Republic of Korea.

Here, before boarding our boat, we walked past enormous pipes whirring and clanking with sand being pumped away from a gigantic dredging machine floating at the mouth of the river. Further south, invisible yet unequivocal, is one of largest land reclamation projects in history – the thirty-three kilometre long Saemangeum Seawall, enclosing an area of four hundred square kilometres of former prime intertidal habitat.

The loss of this, and countless other mudflats in the broader Yellow Sea region, means that shorebirds are left searching the landscape for increasingly small pockets of natural mud between the concrete, and when they land in cramped flocks, there is less food to go around. 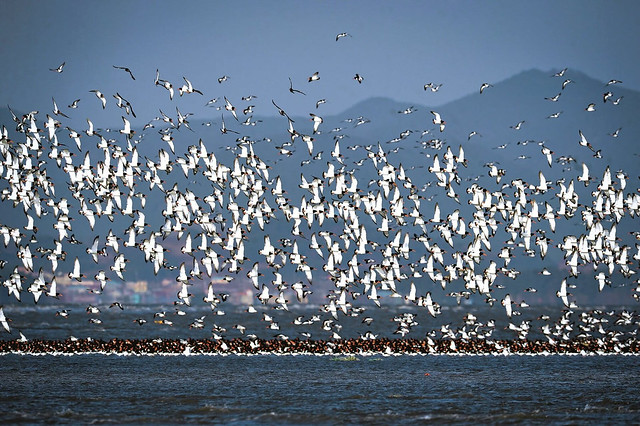 Just north of Saemangeum however, is an unlikely beacon of hope: a small island with a few simple houses encircled by rich, squelchy mudflats, where life depends on the mud’s bounty of fish and shellfish. Here, in Seocheon, the county government realises the area’s natural value and is doing all it can to protect it for both avian and human inhabitants.

The island, Yubu-do, and the wider Geum Estuary [EAAF101] in which it is found, are now considered the most important site for migratory shorebirds in the Republic of Korea.

An estimated 70% of all migratory shorebirds that visit the country are found here, a crucial refuelling “stopover” on a migratory flyway that runs from Australia and New Zealand to the Russian Arctic and Alaska, qualifying it an Important Bird and Biodiversity Area (IBA), a Ramsar site, and an East Asian-Australasian Flyway Partnership (EAAFP) Flyway Network Site. For these birds flying an astounding 20,000 km round trip every year, this is THE place in the Republic of Korea for them to rest, feed… and survive.

Yubu Island could provide a unique opportunity for residents through birdwatching and culinary tourism, whilst protecting birds

The thousand-strong clouds of shorebirds in the air and on the mudflats around us include internationally significant numbers of Sanderling (aka Pixar’s Oscar-winning ‘Piper’), Great Knot, Far Eastern Curlew, Broad-billed Sandpiper, breeding Eurasian Oystercatcher and (although we can’t see any, we know they’re out there), Spoon-billed Sandpiper (Critically Endangered).

While the island itself is a hub for birds, the broader estuary supports populations of endangered shorebirds such as Spotted Greenshank and Chinese Egret, but also huge flocks of waterfowl, including some of the largest flocks of Baikal Teal anywhere in the world.

To take advantage of this spectacular natural phenomenon, Seocheon County Government has set up ecotourism infrastructure such as the Migratory Bird Centre (MBC) in Geum River, an excellent facility mainly focused on the education of children, and coastal Seocheon brings thousands of visitors each year to taste fresh seafood and birdwatch as part of a nature-tourism route. 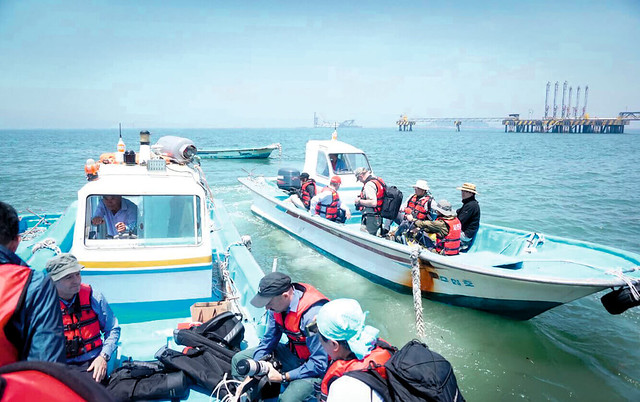 The team coming back from Yubu Island © EAAFP

Yubu Island’s residents, who are mostly over 60 years old, trudge out in bountiful sludge and collect food with traditional hand tools like they have done for centuries, never taking too much. Looking out at the estuary from their perspective, you can understand why they have an unwritten agreement to share the mudflat’s resources with birds and ensure that they are passed on to the next generation, despite the impending development on the horizon.

The high diversity and availability of clams plays a central role in the cultural identity of the area – where seafood is a staple food – and a tourism icon of Seocheon County as a whole. Stamping Yubu Island on the tourist trail, if done in an environmentally sensitive way with birdwatching and enriching cultural experiences, could be significant enough to prevent the industrialisation of these vital mudflat habitats.

With increasing national interest and commitment to conservation, several large international meetings hosted by the Korean Government, and a growing cadre of Korean ornithologists and biologists, environmental issues are gaining importance. Young-min Moon, a Korean ornithologist and post-doctoral shorebird researcher who co-led our trip to Yubu-do, gives us some personal context:

“This site must be saved, not just as a site of international importance to shorebirds but also as a symbol of Korea’s commitment to protect its environment and cultural heritage. It is something that the Government wants to do, but also something that the people would like to see.”

An unlikely beacon of hope, where life depends on the mud’s bounty of fish and shellfish 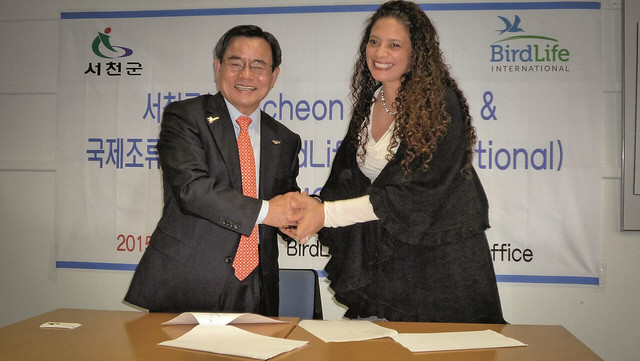 The Korean government has so far designated twelve sites across Korea for ecotourism, including Seocheon, where County officials have strongly focused on promoting this alternative to industrial expansion. To support this aim, BirdLife International and Seocheon County signed a Memorandum of Understanding in 2014 to “conserve shorebirds and develop nature-based tourism for the benefit of habitat and species”.

Our visit to Yubo Island and a World Wetlands Day event that followed were part of an agreed work plan to support Seocheon County’s mission.

The Head of the Ecotourism Department of Seocheon County, who also co-led our trip, tells us that “Over the last twelve years, Seocheon’s priority has been sustainability and nature preservation”, and this reaffirms our shared commitment to conservation.

Seocheon County’s openness to partnerships has now allowed the addition of BirdLife Australia, who, along with Woodside Energy, have committed to conserving more habitats along the East Asian-Australasian Flyway (EAAF). 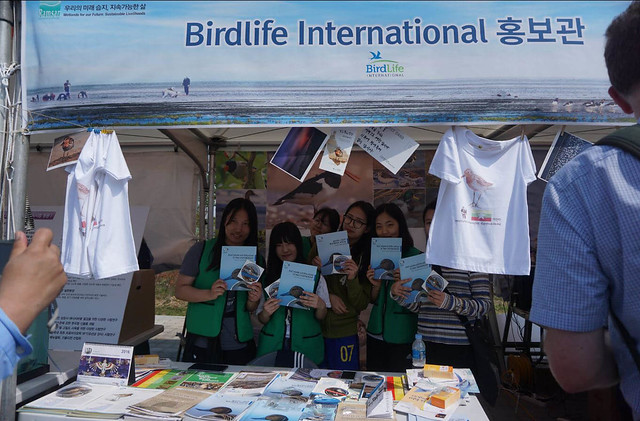 As an overarching conservation measure, the Korean Government is working on nominating Yubu Island and its mudflats as a World Heritage Site, which would offer it the international recognition it deserves, as well as a degree of protection nationally. Hopefully it will come in time: as one resident tells us “We are all getting older. Young people do not want to go fishing anymore and they don’t want to live on the island as they feel there is nothing left here for them.”

As we hop back on the boat, leaving the tranquillity of the island for the clanking pipes and motorised cranes, the group is noticeably subdued. However, returning with “glorious Geum mud on our boots” (as one colleague put it) is a reminder that there truly are riches in mud, and although the challenges are numerous, Yubu Island could – with the right support – provide a unique opportunity for its residents to lead a comfortable life through birdwatching and culinary tourism, whilst providing a safe rest and refuelling site for millions of birds.

The task now is to bring attention to this threatened natural haven (and to others in Yellow Sea coastlines), enough to attract future custodians, people who would rather benefit from the spectacle of swirling shorebirds and bountiful shellfish, instead of more concrete.