The Yellow Sea and shorebirds: An evening with Professor Theunis Piersma

On Wednesday evening, birders in Beijing were treated to a brilliant lecture by Dutch Professor Theunis Piersma, the world-leading shorebird expert. 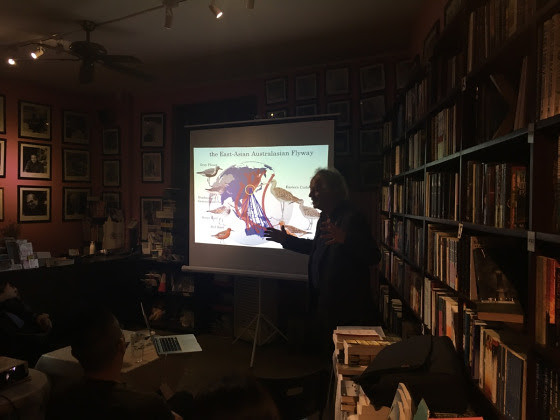 Professor Theunis Piersma delivering his lecture on the importance of the Yellow Sea to migratory shorebirds at The Bookworm in Beijing.

China’s east coast hosts one of the world’s most amazing natural spectacles every spring and autumn – the migration of millions of shorebirds from their wintering grounds in Australia and New Zealand to breeding grounds in the Arctic. It’s a journey that requires sustained physical exertion on a scale that is way beyond the best human athletes in the world. For many of these birds, the Yellow Sea and Bohai Bay on China’s east coast are vital stopover sites on this awe-inspiring journey.  And yet, as we know, the reclamation of tidal mudflats along the Chinese coast is advancing at a rapid rate. Already, around 70% of the intertidal mudflats have disappeared and much of the remaining 30% is under threat. 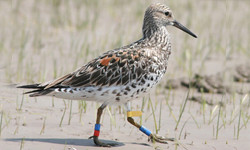 Professor Piersma has been studying shorebird migration for decades and, working with a brilliant team of researchers from China, Australia, New Zealand, Japan and Korea, among others, his research, using colour-ringing and satellite tagging, is showing two clear findings.

First, that populations of many shorebird species, in particular the study species of Red Knot, Great Knot and Bar-tailed Godwit, are declining rapidly.  And second, that the Yellow Sea and Bohai Bay is the problem.

To birders familiar with China’s east coast, these two findings won’t come as a surprise but of course, if there is to be any chance of convincing policymakers to adjust their plans, the most important thing is to provide evidence.

That is why Professor Piersma’s work is so important.  He and his team have been able to provide several key pieces of compelling scientific evidence.

First, their research shows that the three study species, each of which uses a different habitat in the Arctic, are showing similar increasing mortality rates. To find out what is causing this rising mortality rate, each part of their life-cycle must be studied. Monitoring on the wintering grounds in Australia and New Zealand shows that mortality there is normal, demonstrating that the problem lies elsewhere. The main reason for mortality on the Arctic breeding grounds that could affect all three locations simultaneously is when the ice is slow to retreat, meaning that birds arrive on the breeding grounds when they are still frozen and there is a lack of food, leading to high mortality. Weather data from the last 7-8 years during the study period shows that, if anything, the melt has been earlier than usual, meaning that cold springs are not the reason for high mortality. This strongly suggests that the problem is not in the Arctic but instead along the migration route.

This information, together with other supporting evidence, strongly supports the hypothesis that the reclamation of tidal mudflats in the Yellow Sea is causing the populations of many shorebird species to decline fast.

The challenge is to inject this scientific evidence into the Chinese policymaking circles. That is why Theunis met with officials from the China Biodiversity Conservation and Green Development Foundation (CBCGDF) during his visit to Beijing. This group is a government-sponsored “NGO” (is that an oxymoron?) that has the authority to make submissions to the State Council (China’s cabinet) about issues relating to wildlife conservation and biodiversity. The meeting was positive with a keen interest from the officials in Professor Piersma’s work and an appetite to use the scientific data to develop proposals to the State Council. There is a lot of work to do to influence decision-makers about the importance of the Yellow Sea and Bohai Bay for migratory shorebirds but, as someone important once said, “every great journey starts with a single step.” 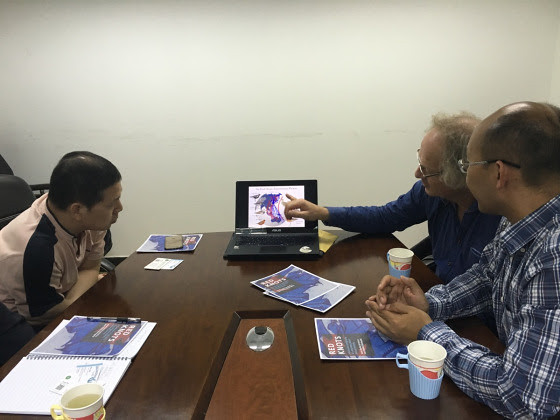 Professor Piersma explaining his research findings to officials at the CBCGDF. 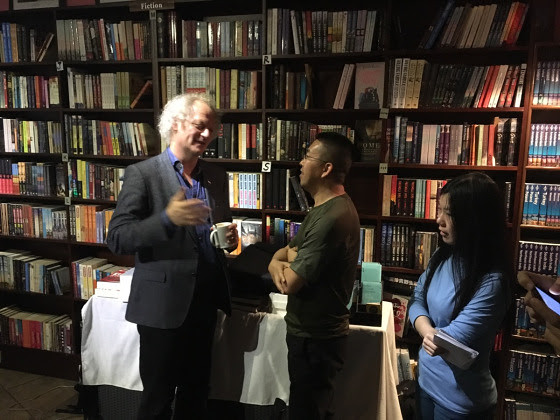 Professor Piersma chats to young Beijing birders after his lecture. 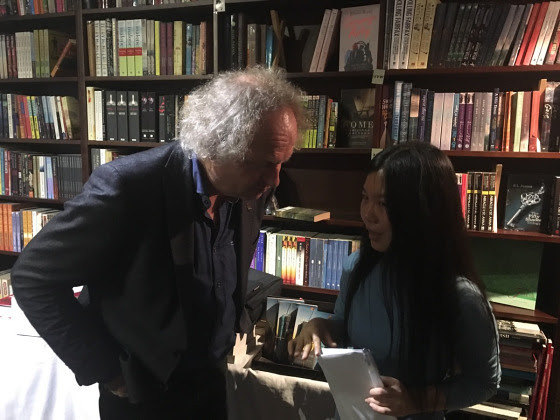 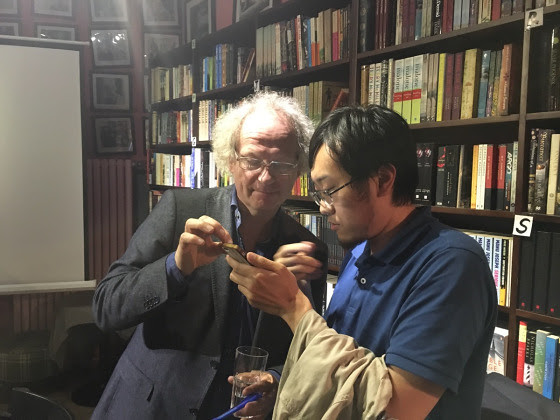 Big thanks to Professor Piersma for taking the time to meet with young Chinese birders during his visit and we wish him good luck as he continues his research and begins the task of convincing policymakers to take into account the importance of China’s east coast to so many amazing shorebird species. Any birders visiting the coast should look out for and report any colour-ringed or tagged birds they see, recording the species, location, position of the colour-flags and any other interesting information. Observations from amateur birders play a vital role in contributing to the research.  See here for details about how to report a flagged bird. And here for a visual guide to the flags used and their places of origin.