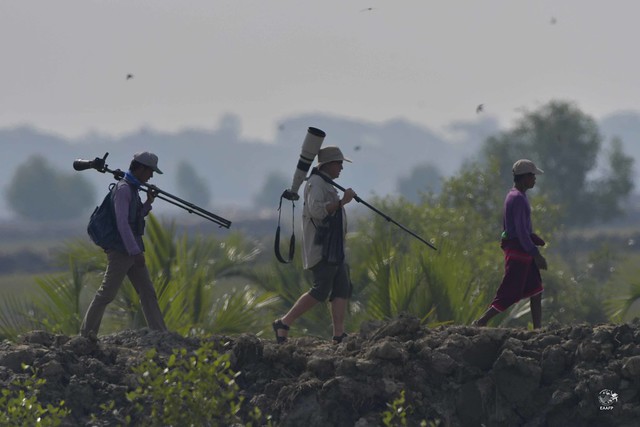 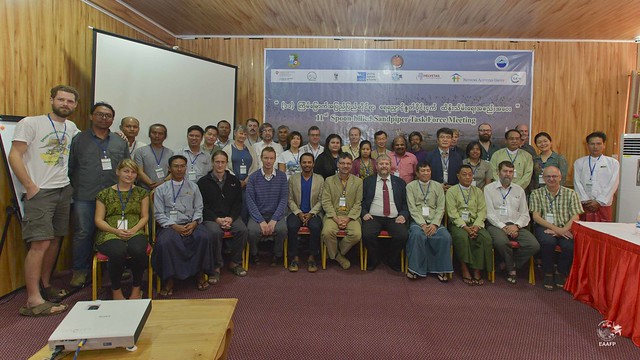 About every two years the Task Force (TF) members come together somewhere along the flyway to exchange information on their activities and discuss urgent conservation issues. The concept of the Spoon-billed Sandpiper (SBS) TF for the biennial is to combine both discussions and field observations; exchange of information, methodologies, field experience, training newcomers and learning from each other as well as summarizing results of two years’ work and development conservation plans.

This year the 11th meeting was held in Mawlamyine in Myanmar, not far from the Gulf of Mottama [EAAF117] to offer support to the most important wintering site for the Spoon-billed Sandpiper. The meeting was fully packed with 10 days of surveys, meetings and excursions! Prior to the meeting the international team of over 20 experts from Russia, China, Thailand, Bangladesh, Germany, UK and the US conducted a survey of the large mudflats over five days to look for wintering SBS and other shorebirds together with local experts from our national partner Biodiversity And Nature Conservation Association (BANCA). In total over 70 SBS were observed but the team is sure that many birds were missed in the vast expanses of the Mottama mudflats. 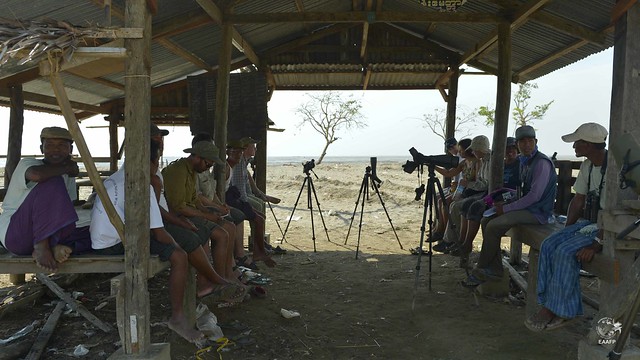 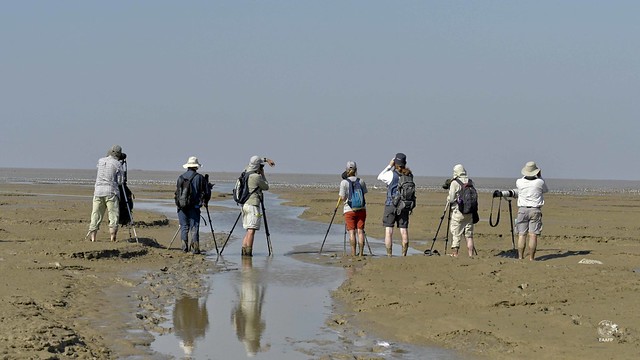 Three days of meetings followed, divided into a National Workshop, developing a National Action Plan for the species and one and a half days for the international Task Force meeting. The purpose of the biannual TF meetings is mainly to provide international support to the local partner. This year the Task Force members came to support BANCA’s efforts to secure the Gulf of Mottama (already an EAAFP Flyway Network Site) as a Ramsar site and ensure its best protection.

The meeting was co-hosted with the provincial government of Mon State and it was very reassuring and pleasing to hear that the Mon State government requested the national forest department to designate 42,000 ha of the Gulf as a Ramsar site. Another important SBS site in the delta region will also receive Ramsar site protection status and several more sites along the coast are proposed for the 2017-2020 timeline within the national action plan. It was also great to see the high level participation in the workshop from all coastal regions to secure the best protection schemes for all SBS sites along the 2,800 km long coast. Myanmar has demonstrated its willingness to be at the forefront of conservation activities by being the first country to develop and implement a SBS national action plan. There is still a lot to do, with management issues needing to be clarified for most coastal wetlands. However, the level of progress has been impressive. 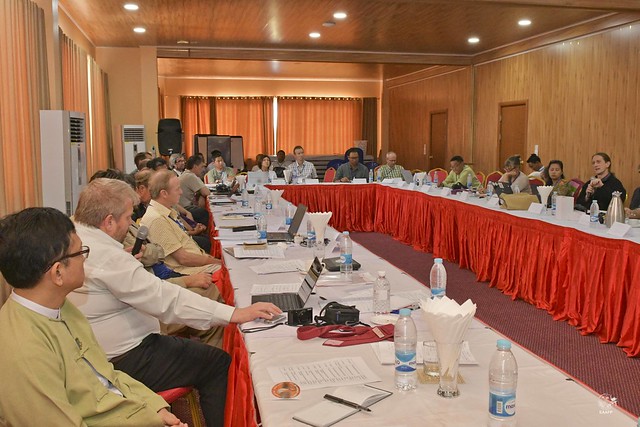 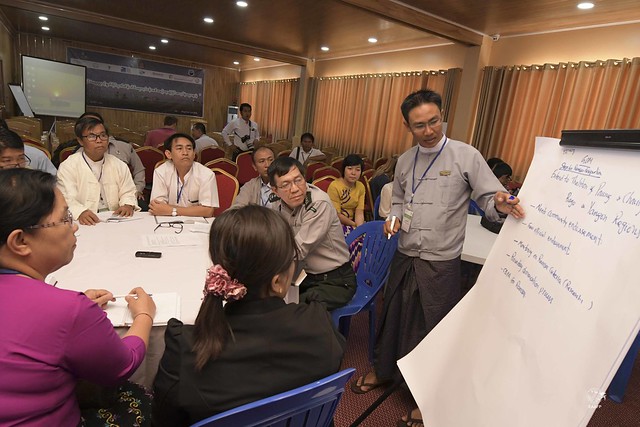 47 experts from 12 countries were present at the TF meeting (plus another 18 persons during National Workshop). All key SBS Flyway countries were represented except DPRK. But during EAAFP MoP9, DPRK participants expressed their interest to collaborate with Russia on possible SBS surveys in the country. There were also many impressive reports from all over the flyway and equally important has been the discussion on hunting and reclamation at many coastal sites in China. Encouragingly, there has been significant progress on hunting mitigation in South China.

The biggest threat to SBS still remains the threat of reclamation of Tiaozini but at present the development has been put on hold and a new law in China is requesting the regional developers to launch a new EIA. The Russian-Chinese Bilateral has been conducting a first official autumn survey at Tiaozini, confirming the global significance of this highly important stopover site for the SBS. This Tiaozini survey can be considered as an official data source for decision making by the government of China. The Arctic Migratory Bird Initiative (AMBI) of CAFF, Arctic Council presented their plans to help in conservation of SBS as the focal species for this project, which is raising Arctic migratory bird conservation work in Asia to the diplomatic level. Cooperation with China on SBS conservation will be a priority for AMBI in 2018-19. These and many other reports together with the good news on the progress of the protection status of Myanmar’s wintering sites generated further hope and an upbeat atmosphere among the Task Force members, all are highly inspired to continue their important work at their respective sites. 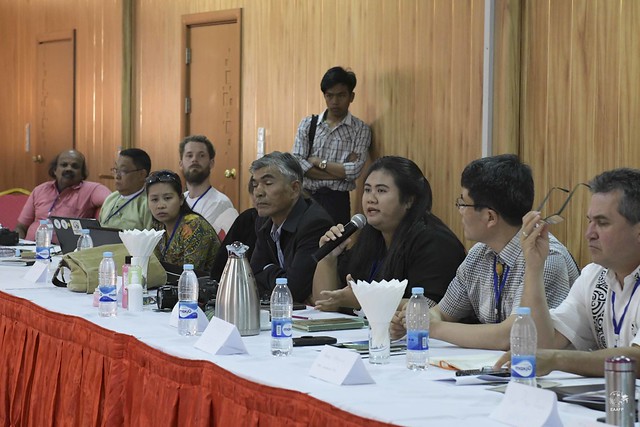 Particular focus was given to discussions on Vietnam – possible the least advanced country in SBS conservation on the flyway. SBS is still not protected there, potential hunting issues in north Vietnam are serious and there is no current mitigation planning. The importance of particularly northern Vietnam for SBS wintering and short stopovers in November and March-April might be seriously underestimated. The discovery of 18 SBS by the team of Tong Mengxiu just across the border in Guangxi province of China is showing that border areas of Vietnam might be very important and at the same time are under severe potential threat.

The strategic direction of further SBS conservation work will combine focusing on systematic implementation of conservation measures in the key known 6-8 SBS locations as well as learning about new locations using various methods including satellite tagging. Intertidal reclamation and illegal hunting are seen as key threats and will be a focus of action for the next two years. Stronger involvement of national governments of key flyway countries is a priority. Cooperation of research and NGO communities with relevant government structures is the way for successful SBS conservation work, and is most advanced in China and Myanmar. A full report of the meetings will be published on the Task Force website shortly. Many countries and regional reports will feature in the next newsletter, to be issued in March/April 2017. The next meeting of SBS TF is potentially planned to be held in China during 2018. More information on this will be available later. 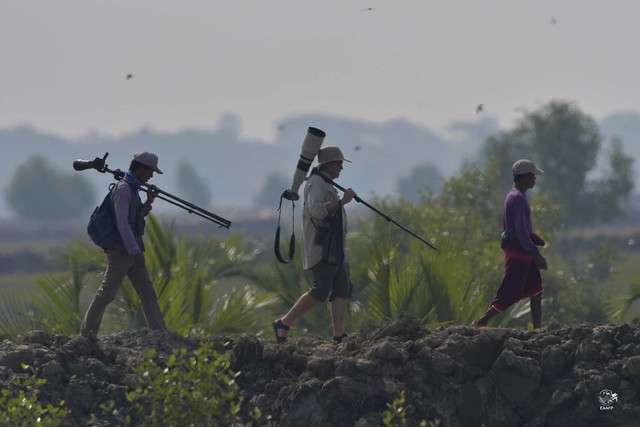 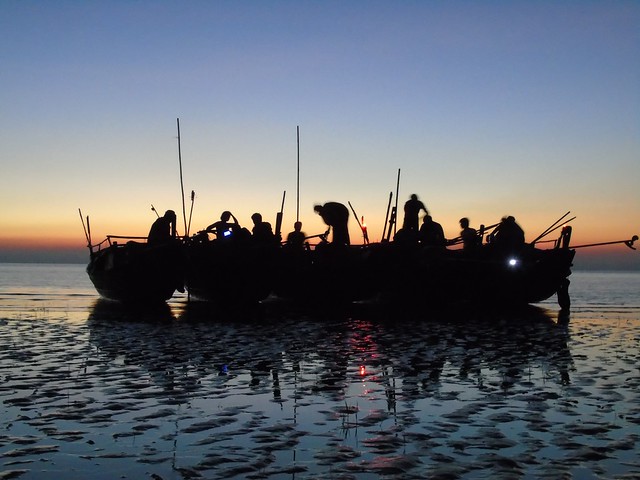 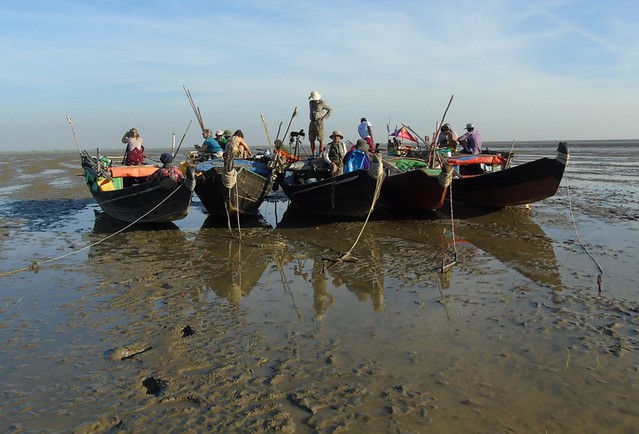