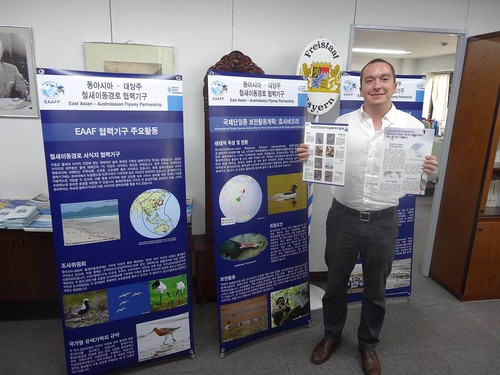 The EAAFP Secretariat supported Hanns Seidel Foundation Korea (HSF Korea) in developing CEPA materials for the poster session at the Rason International Trade Exhibition (RITE) in the Democratic People’s Republic of Korea (DPRK), as reported in the article from HSF Korea below. The DPRK has many important habitats for migratory waterbirds such as Scaly-sided Merganser, Swan Goose and Black-faced Spoonbill. We were pleased to be able to support this activity and helped in designing a series of standing banners on the East Asian-Australasian Flyway and the migratory waterbirds it supports, a leaflet on the importance of wetlands in Rason (which our Chief Executive visited in 2014) and a flyer on migratory waterbirds of DPRK.

This year’s international economy and trade exhibition is taking place in Rason, DPRK, from 20th until 24th of August for the fifth time. In the city situated in the Northeast of DPRK, directly bordering on China and Russia, in 1991 the first of by now 20 North Korean Special Economic Zones was established. In cooperation with the German-Korean Chamber of Industry and Commerce in Seoul the HSF Korea organized the participation of entrepreneurs and business people in the “Rason International Trade Exhibition”. The economic delegation, headed by Felix Glenk of the HSF Korea, plans to evaluate the investment opportunities on-site in the Rason Special Economic Zone.

The HSF Korea is attending the RITE for the fourth time and is presenting a project on the protection of the nature and bird reserve in Rason at its own exhibition booth. This presentation was conceptualized in cooperation with the East Asian-Australasian Flyway Partnership. Rason is situated in the Tumen Delta which borders on China and Russia and thus is important to the preservation and the sustainability of the delta. 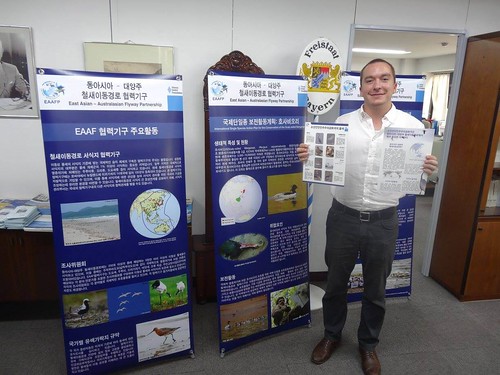 The Sonbong Migratory Bird Reserve in Rason is a crucial roosting place for many threatened bird species on the Asia-Pacific flight path. The Tumen Delta is particularly suited for cross-border ecological cooperation with China and Russia as both countries have big adjacent roosting place for migratory birds that are relevant on an international scale. It was in this area that in 2014 the Hanns Seidel Foundation conducted the first migratory bird census in cooperation with the United Nations Economic and Social Commission for Asia and the Pacific (UNESCAP) as a part of the North-East Asian Subregional Programme for Environmental Cooperation (NEASPEC).

In conducting its projects in DPRK the HSF Korea would like to support the country regarding economic development and point out that the conservation of the environment goes hand in hand with a long-term stable economic and social development. The HSF Korea’s middle-term objective is to encourage DPRK to join the Ramsar Convention, Convention on Wetlands, on the protection of the wetlands. This would not only have the advantage of the conservation of the environment being improved on but would also further DPRK’s international commitment and participation in international projects.

More information and photos are available at: http://www.hss.de/korea/en/news-events/2015/participation-in-the-5th-rason-international-trade-exhibition-in-rason.html#c74780