Successful Effort to Reduce Mortality Rate of Rare Seabirds by 20% 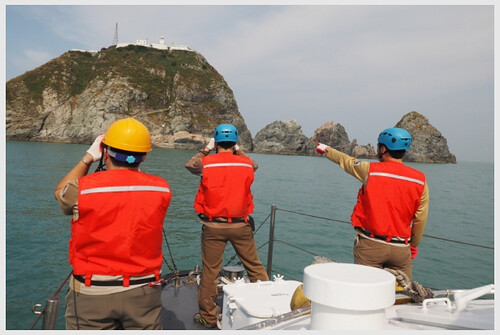 Chilbaldo Islet is an uninhabited island (unmanned lighthouse) located 64km west from Mokpo. It is surrounded by rock face of average 50° slope and has an area of 36,993?. At its summit, the peak is 105 meters above sea level.

When Chilbaldo Islet had a manned lighthouse, invasive plants, such as the Oriental Chaff Flower Achyranthes japonica, were introduced to the islet. The plant rapidly flourished and outcompeted natives, such as the Coastal Rock Sedge. As a result, this weed became a critical threat to Swinhoe’s Storm Petrel that breeds in burrow under the roots of the Coastal Rock Sedge.

The Oriental Chaff Flower is a perennial plant of the  Amaranthaceae family, which is a native plant in Korea. It can be easily seen by fields, roadside banks and houses. Its Korean name literally means ‘knee of the cow’ because each node sticks out like a kneecap of a cow. Blossoming season is from August to October and fruiting season is from September to October.

The seed pod of the Oriental Chaff Flower is shaped like a hook. That is why whenever Swinhoe’s Storm Petrel goes near the plant to approach its burrow, those seeds get attached to their wings, making it impossible to fly. This results in the death of the bird due to exhaustion.

On Chilbaldo Islet 69% of Swinhoe’s Storm Petrel’s nests were found in sedges. This is because the soil under the roots is rich in humus, making it easy for the birds to dig a burrow, and the long leaves of the plant hide the nest from the predators and also protect it from the rain.

Meanwhile 31% of the birds nested among dangerous plants, such as silver grass, worm wood and Oriental Chaff Flower. These weeds are much taller than the Coastal Rock Sedge, so the sedges wither away due to lack of sunshine. Also, these plants have dense roots leaving no space for a nest. During October, the fruiting season of the Oriental Chaff Flower, the threat becomes even higher.

Korea National Park Service has formed Chilbaldo Islet Restoration Consultative Group with eight related organisations including Korean MAB National Committee and has been leading the restoration projects since 2011 along with the Cultural Heritage Administration, Shinan-gun and Korea National University. From last year, they carried out 15 extensive weed removal activities of 401 man-days, and replanted 84,000 coastal rock sedges.

In addition, 500m of sea around Chilbaldo Islet was included in the National Park Reserve and buoys showing the area off limits were installed to protect the seabird breeding site.

These active restoration efforts contributed to a 20% decline of Swinhoe’s Storm Petrel’s mortality rate from 558 last year to 448 this year.

According to research by Korea National Park Service, there are lots of seabirds breeding in Chilbaldo Islet including globally threatened species such as Swinhoe’s Storm Petrel (about 10,000 pairs), Ancient Murrelets Synthliboramphus antiquus (about 3,000 pairs) and Styan’s Grasshopper Warbler Locustella pleskei along with Peregrine Falcon Falco peregrinus and Pacific Swift Apus pacificus.

The chief of Dadohaehaesang Western Office of Korea National Park Service, Jonggwan Choi said, “We will continue removing dangerous plants and managing colonies of Coastal Rock Sedge so that Chilbaldo Islet can be a stable breeding site for seabirds.”

To read the original article (in Korean), click here.
To see the photos of Chilbaldo Islet [EAAF107], go to our Flickr album.