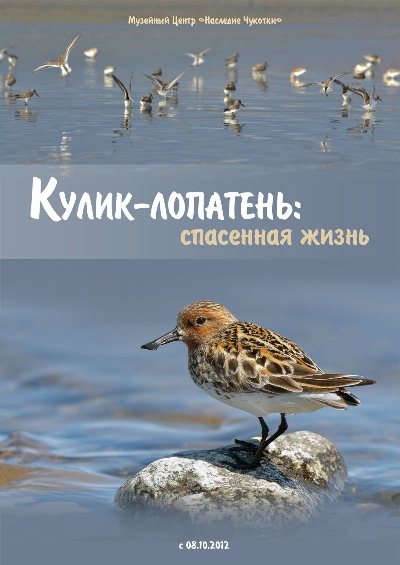 The conservation exhibition “Spoon-Billed Sandpiper – life saved” opened in Anadyr, Chukotka in the Russian Arctic, at the Museum Center “Chukotka Heritage”, on October 8, 2012. The exhibition is supported by BirdLife’s “Preventing Extinction” Program.
The opening ceremony was attended by the Governor of Chukotka, Roman Kopin, all regional conservation officials, local Parliament representatives, Indigenous People’s organizations and many other authorities, as well as over 50 invited guests from Anadyr. The Conservation of Arctic Flora and Fauna Working Group (CAFF) of the Arctic Council met in Anadyr at the same time, so representatives of Environmental Agencies from all Arctic countries also participated in the opening of the exhibition.
This may be the first time in Russia for an entire exhibition of that level to be devoted to a single species of bird. The Spoon-billed Sandpiper (SBS) is the most critically endangered and most rapidly declining species in the Red Data Book of the Russian Federation and one of the hundred most threatened birds in the world. Its population has plummeted by 90% in the last 30 years. Only 100 breeding pairs are estimated to remain, mostly in Chukotka.

A conservation program was begun in 2000 in Chukotka, led by E.E.Syroechkovskiy. The program is currently implemented by BirdsRussia on behalf of BirdLife International, in cooperation with RSPB (BirdLife in the UK), Wildfowl & Wetlands Trust (WWT), Arcona consulting and a number of other leading conservation organizations under the umbrella of the East Asian – Australasian Flyway Partnership.

The exhibition includes nine wall size posters displaying information about the species distribution, conservation status, threats, and priority conservation actions along the flyway but with particular attention to the situation in Chukotka.

The exhibition covers three main aspects of the conservation work for the species: 1) the situation on the breeding grounds in Chukotka, focusing on the results of conservation research and awareness work in the vicinity of the village Meinypil’gyno where the last relatively large SBS breeding population still remains. 2) an overview of migration and wintering grounds with special attention to the main threats (habitat loss in the intertidal zone and capture of migratory birds by local people for food), and the ways to address them, including the results of the work of the SBS Task Force started in 2004 under another name by that time. 3) two major international projects to conserve the species – “Captive breeding” and “Head Starting”.

The exhibition presents numerous scientific and popular articles indicating the global concern for the plight of this species throughout the world. It also features the RSPB’s “SBS migration game” for children, non-stop video demonstration (from the USA University of Cornell’s Lab. and WWT), PowerPoint presentations at touch-pad small screens and a separate gallery with over 30 brilliant photos of SBS (by B.Scampion, P.Palmer, I.Kaurov, G.Vyn and S.Chowdhury) and drawings by artists (by J.Gregersen, E.Koblik and J.McCalum) – all of them members of expeditions to Chukotka.
The SBS exhibition will stay in Anadyr for two months and then be moved to Meinypyl’gyno for permanent display. All Anadyr schoolchildren will participate in organized visits to the exhibition with guided tours by museum workers. Museum guides will inform visitors about SBS and its story. The exhibition was on local TV and Radio every day for five days including prime time interviews and the main Chukotka newspaper published several news articles about it. National media in Moscow also covered this event (http://www.ria.ru/arctic_news/20121012/906751976.html)

SBS and East Asian-Australasian Flyway conservation issues were also on the agenda of the Arctic Council’s CAFF meeting. During the meeting Board members agreed that CAFF should explore future cooperation with the EAAFP and Convention on Migratory Species and that migratory birds, particularly in East Asia, will receive more attention in future conservation work by CAFF.

This exhibition is the most prominent SBS awareness conservation action in the Chukotka region so far and is the first time that such attention has been devoted exclusively to birds. That such a small bird migrates so far to South East Asian countries is greatly appreciated by many people of all ages. Important issues such as the need to create local protected areas in the SBS breeding grounds are raised by the exhibition.

The success of this exhibition can encourage future exhibitions focused more broadly on migratory bird conservation and a preliminary agreement on this idea has already been reached with some key decision makers in Anadyr. It is hoped this exhibition can be the first step to make Chukotka citizens and decision makers aware and proud of their unique bird and natural heritage and that conservation actions at a regional scale can be developed and implemented.