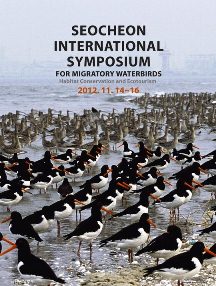 Seocheon International Migratory Waterbird Symposium was held on 16 November in Seocheon, South Korea to explore options and learn from international best practice to ensure the conservation and management of migratory waterbird habitats for Seocheon, including appropriate ecotourism development. There were 100 international and domestic participants, including delegates from National Parks Board of Singapore, WWF-Hong Kong, Japanese Association for Wild Geese Protection, University of Queensland, Australia, Aurich County, Germany and EAAFP Secretariat as well as Ministry of Land, Transport and Marine Affairs, Korea and other domestic organisations. Presentations were given on current habitat status of Seocheon, present plans of conservation and management of Hong Kong Mai Po and of Singapore Sungei Buloh Wetland Reserve, declining status of shorebird populations in the EAAF and rice paddy management for geese and cranes in Japan. Following the presentation session, the panel discussion went on before and after dinner with Seocheon Mayor Na So-Yeol and key delegates. The delegates advocated a holistic approach to conservation and eco-tourism and urged the governments to consider the needs and function of other wetlands county-wide when setting priorities and making decisions. In this sense a county-wide Action Plan was advocated. Site specific suggestions included developing a management plan for the Ramsar site, the need to restrict access to and on Yubu-do EAAF Network Site, and creating high-tide roosts at the former salt pan on Yubu-do and close to the visitor centre.

Seocheon is surrounded with internationally important habitats for migratory waterbirds, such as Yubu-do Island EAAF Network Site, Seocheon Tidal Flat Ramsar Site, Geum River Estuary EAAF Network Site and Shinseongli Rice Paddy, as it is situated in along the western coastline of the Korean peninsula in the Yellow Sea. Seocheon is a significant location as one of stopover sites for migratory shorebirds along the flyway. A good number of shorebirds including the critically endangered Spoon-billed Sandpiper, Bar-tailed Godwit and Far Eastern Curlew, and a great number of ducks and geese, including 300,000 of Baikal Teal visit Seocheon every year.

This symposium was organised by Korea Waterbird Network and Ecoturism Korea and supported by Seocheon County, Ministry of Land, Transport and Marine Affairs of Korea, EAAFP Secretariat and the Ornithological Society of Korea.