Please send us information and case studies about the effects of disturbance (such as change in the behavior, distribution or flying routes of birds) caused by construction of structures.

Worldwide, there are several ongoing constructions in important waterbird habitats. We would like to gather such case studies from the scientific literature in order to present the evidence to implementing agencies and other stakeholders so they would consider the possible impacts of construction on biodiversity and think about feasible mitigation actions. 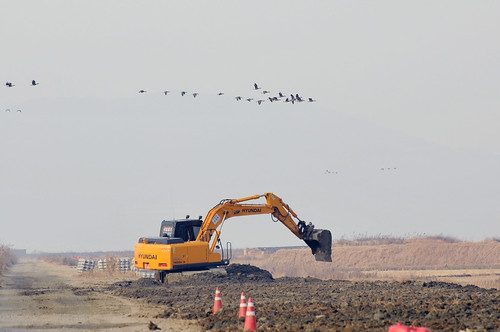 Currently, there are plans for the construction of two bridges in ecologically important estuaries in Japan: on the Yoshino River in Tokushima and on the Tama River that flows between Tokyo and Kanagawa. Both rivers are designated as Japan’s Important Wetlands 500 by the Ministry of Environment of Japan.

Yoshino Estuary [EAAF061] was designated as Flyway Network Site in 1996. There are already three bridges within 4 km from the river mouth and the last one, Awa-Shirasagi Bridge was completed in 2012. According to a report published by Tokushima Nature Observation Group in 2014, shorebirds upstream from the bridge have declined significantly after the construction, while the total number of birds within the estuary remained stable. Shorebirds also avoided flying over the bridge. These results suggest that the bridge negatively affected shorebird movement.

The new bridge will be constructed just 1.8 km away from the Awa-Shirasagi Bridge. The company in charge of the construction is NEXCO West, a private company for highway construction and management. WWF and other environmental NGOs are requesting NEXCO to assess the impact of not only the new construction but also that of previous developments, as such assessments have not been conducted yet.

Tama River is adjacent to the Tokyo Haneda International Airport and is in a highly developed area. The new bridge will connect the airport to Kawasaki City and it is expected to improve the accessibility of the industrial area of Kawasaki. However, Tama River is one of the last shorebird refuges in Tokyo Bay, so environmental NGOs are afraid that constructing a new bridge  will further impact the biodiversity of Tokyo Bay.

In the case of Hikawa river of Kumamoto prefecture, construction of the bullet train bridge disturbed wintering Black-faced Spoonbill, however countermeasures, such as the expansion of resting sites and the placement of decoys were suggested to mitigate the effect to certain extent (Shigeki and Yasuhisa 2012). Unfortunately there is not enough information on the effect of bridge construction. Anybody with information, please send it to Satoshi Maekawa (maekawa AT wwf.or.jp).