Every year, millions of shorebirds migrate to the Arctic to breed—some coming from as far away as Australia and New Zealand—and then head back again. Nearly all of the birds making this journey spend time in the food-rich intertidal mudflats of the Yellow Sea ecoregion, on the east coast of China and the west coasts of the Korean peninsula. But as China’s economy has grown, around 70 percent of the intertidal mudflats in the Yellow Sea area have disappeared—the land drained and “reclaimed” for development. All of the more than 30 species of shorebirds that rely on the mudflats are declining, and those that stop there twice a year are declining at a faster rate than those that stop only once. If the current trajectory continues, the Yellow Sea—once known as the cradle of China—will become the epicenter of extinction.

The endurance and resilience required by this epic journey is stunning: A population of bar-tailed godwits that winters in New Zealand, for example, flies 6,800 miles to Alaska and then, after bearing and raising its young, makes a nonstop return trip—equivalent to a human running continuously for seven days at 43 mph. Sadly, the number of bar-tailed godwits successfully returning to New Zealand each autumn has shrunk from around 155,000 in the mid-1990s to just 70,000 today. 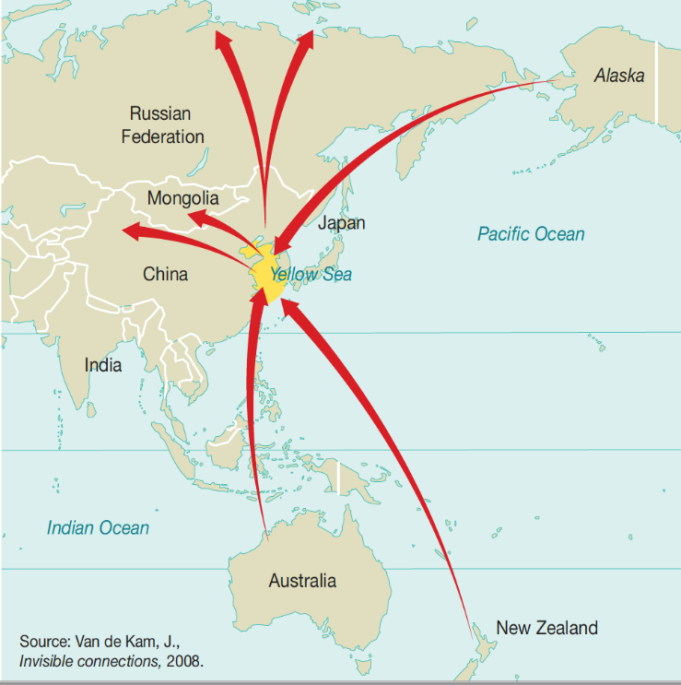 In January 2018, the Chinese government announced it will halt all “business-related” land reclamation along the country’s coast, which will help the tens of millions of migratory shorebirds along the East Asian-Australasian Flyway, including species on the brink of extinction, such as the critically endangered spoon-billed sandpiper and the endangered great knot.

The head of the National Marine Inspection Office, Gu Wu, said that land reclamation has historically helped boost economic development. “However, illegal and irregular reclamation activities caused a number of problems to marine ecosystems and lawful businesses,” he said, and “those effects have become a major public concern, so the administration decided that reclamation would be closely looked at in its annual inspection last year.”

Chinese media has criticized coastal provinces for mismanaging land reclamation projects, as revealed by the oceanic administration’s 2017 inspections.  Hebei province, for example, which is home to well-known birding sites such as Beidaihe, Nanpu, and Happy Island, has allowed tourism, aquaculture, and shipbuilding in one of its national nature reserves. The government of neighboring Liaoning Province failed to collect more than half the fines imposed for violating reclamation regulations; in addition, almost one third of the province’s waste water drain pipes into the sea were illegal and many were not properly monitored. In the south, Jiangsu Province’s mismanagement of reclaimed land, including fish farming in the seas surrounding a national wetland reserve and 184 land reclamation projects that lack government approval, have also drawn negative attention.

While the ban on land reclamation is encouraging, China’s enforcement record is not strong. It remains to be seen whether the government will pursue violators with the rigor necessary to ensure the integrity of the remaining intertidal mudflats.  But I am optimistic; the new policy is consistent with President Xi’s goal of building an “ecological civilization,” as he emphasized at the 19th Communist Party Congress; and it is in line with other recent efforts to strengthen environmental regulations, including the Environmental Protection Law.

By halting land reclamation, China’s announcement could be the turning point for the spoon-billed sandpiper and the many other species dependent on the intertidal mudflats of the Yellow Sea coast. But it must be accompanied by other efforts to protect and manage key sites for migratory shorebirds, including policy and advocacy campaigns by organizations such as the East Asian-Australasian Flyway Partnership, BirdLife International and local NGOs. Transforming the fortunes of the world’s most threatened flyway will only be possible if all the countries along the route cooperate, from Russia in the north, to Australia and New Zealand in the south. Together, China and these countries could set an example for governments and their partners working to protect world’s other major flyways facing similar threats, including the Atlantic and Pacific Flyways.