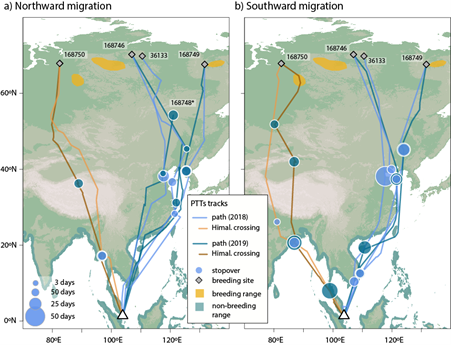 Researchers at the National Parks Board (NParks) have demonstrated, for the first time, how migratory shorebirds cross the Himalayas from Southeast Asia, in a study published in Nature’s Scientific Reports, on Friday (11 Dec 2020). The study, which spanned five years, also found that Singapore is at the intersection of the East Asian-Australasian Flyway (EAAF) and Central Asian Flyway (CAF).

It showed that some adult Common Redshanks (Tringa totanus) and Whimbrels (Numenius phaeopus) wintering in Singapore flew directly over the Himalayas – which extends 2,400km from east to west, with a peak elevation of more than 8,000m – to breeding grounds in the Qinghai-Tibet Plateau in China and north-central Russia via the CAF.

The findings also indicate that shorebirds use both the CAF and EAAF to reach their breeding grounds, with Singapore being at the intersection of both flyways. While for years Singapore is known as an important pitstop for migratory shorebirds along the EAAF – with an estimated 2,000 migratory shorebirds of more than 40 different species roosting and feeding at Sungei Buloh Wetland Reserve and Chek Jawa Wetlands in Pulau Ubin every migratory season – it was not known to be in the CAF range.

As such, most conservation initiatives, such as the East Asian-Australasian Flyway Partnership and the ASEAN Flyway Network, currently focus on migratory shorebirds and their habitats along the EAAF. This study illustrates the value of conserving the wetlands habitats, including mangroves, mudflats and freshwater marshes, in Singapore to provide migratory shorebirds using the EAAF or CAF feeding and roosting sites during their stopover here.

These discoveries give researchers a more thorough understanding of shorebird ecology and their migration routes from Southeast Asia. Continued efforts in documenting and learning about their behaviour, breeding patterns and stopovers will allow NParks and the global conservation community to come up with more focused conservation strategies to ensure the long-term survival of these birds. 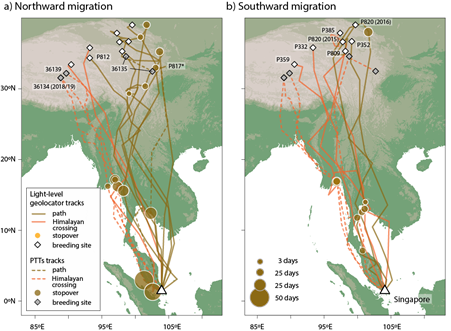 Figure 1. Migration routes of Common Redshanks based on light-level geolocation in 2015 and 2016, and satellite transmitters in 2018 and 2019. Map Source: ETOPO1 1 Arc-Minute Global Relief Model dataset provided by NOAA https://www.ngdc.noaa.gov/mgg/global/global.html. Produced by Simeon Lisovski.

At the Committee of Supply debate this year, plans were announced to transform Singapore into a City in Nature, integrating nature into our city while mitigating the impacts of urbanisation and climate change. Part of this vision includes conserving and restoring Singapore’s natural ecosystems to bolster the island’s resilience against the effects of climate change while safeguarding core habitats of biodiversity to enhance Singapore’s natural capital. This is done through ongoing habitat restoration and species recovery efforts.

Taking reference from the Nature Conservation Masterplan, NParks utilises a science-based approach to ensure that our wetlands are optimal as habitats and when developing effective conservation management plans for native biodiversity and their habitats.

The study used a suite of bird tracking technology, such as geolocators and satellite tracking devices, to track the migratory journeys of 10 adult Common Redshanks and 5 adult Whimbrels between 2015 and 2019.

Some of the key findings from the geolocators and satellite tracking are below: