On 9th July, the Minister of the Ministry of Ocean and Fisheries (Mr. Young-Choon Kim) announced the ‘Mid and Long-Term Ocean Restoration Plan for 2019 - 2023’ that will expand the target area for tidal flat restoration projects, the reinforcement of project management system and enlarge the incentive in restored area to revive the value of tidal flats. The project will focus on the restoration of abandoned tidal flats, such as salt pan or fish farms, and will also recover the old and severed mudflat channels which, for example, have been cut off by bridges. The project will also prepare and distribute technical guidelines for standardized restoration projects to drastically reduce trial and errors that may occur in future projects.

In 2010, the restoration project for tidal flat ecosystem was initiated but without a mid or long-term plan. As a result, the project ended with only nine sites being restored over a nine year period, covering 1.08㎢ of tidal flat and 3.4㎞ of tidal flat waterway. As a result, it was hard to feel the effects of the restoration project. Also, the project’s characteristics combined with various elements such as marine ecology, marine resources and civil engineering techniques made it difficult to design projects, execute construction projects, and secure budgets. In addition, some local governments were reluctant to carry out the project due to insufficient incentives for the area concerned.

Under the new Plan, the Ministry included the mid-term plan for the new tidal flats restoration project to improve the proposed defects in the previous project and to vitalize the project more. According to the project plan, the Ministry will restore 23 tidal flats from 2019 to 2023 at an annual cost of (19.5 billion Won). Among them, 14 restoration projects will be completed by 2023, covering 3 square kilometers of tidal flats and 3 kilometers of tidal flat waterways. Restoration work on another nine sites will be completed by 2024-2025.

The project will also promote sustainable tidal flat fishery and boost local customized ecotourism through branding the restored tidal flats that will benefit the local residents.

Mr. Myoung, Ro-hyun (Director, Marine Ecology Division) said that, “By implementing the mid and long-term plan without any disruptions, we will revive the tidal flats by providing an average of 19.5 billion Won per year. It will be of help for the local economy as the enhancement of tidal flats, the fishery and ecotourism are expected by returning restored tidal flats to local people.”

Meanwhile, the Ministry is in the process of legislating ‘Act on Sustainable Management and Restoration of Tidal Flats’ to maintain, restore, and use tidal flats with diverse functions and values, including the promotion of public awareness on tidal flats, designation of clean (uncontaminated) tidal flats, pollution purification, and restoration. 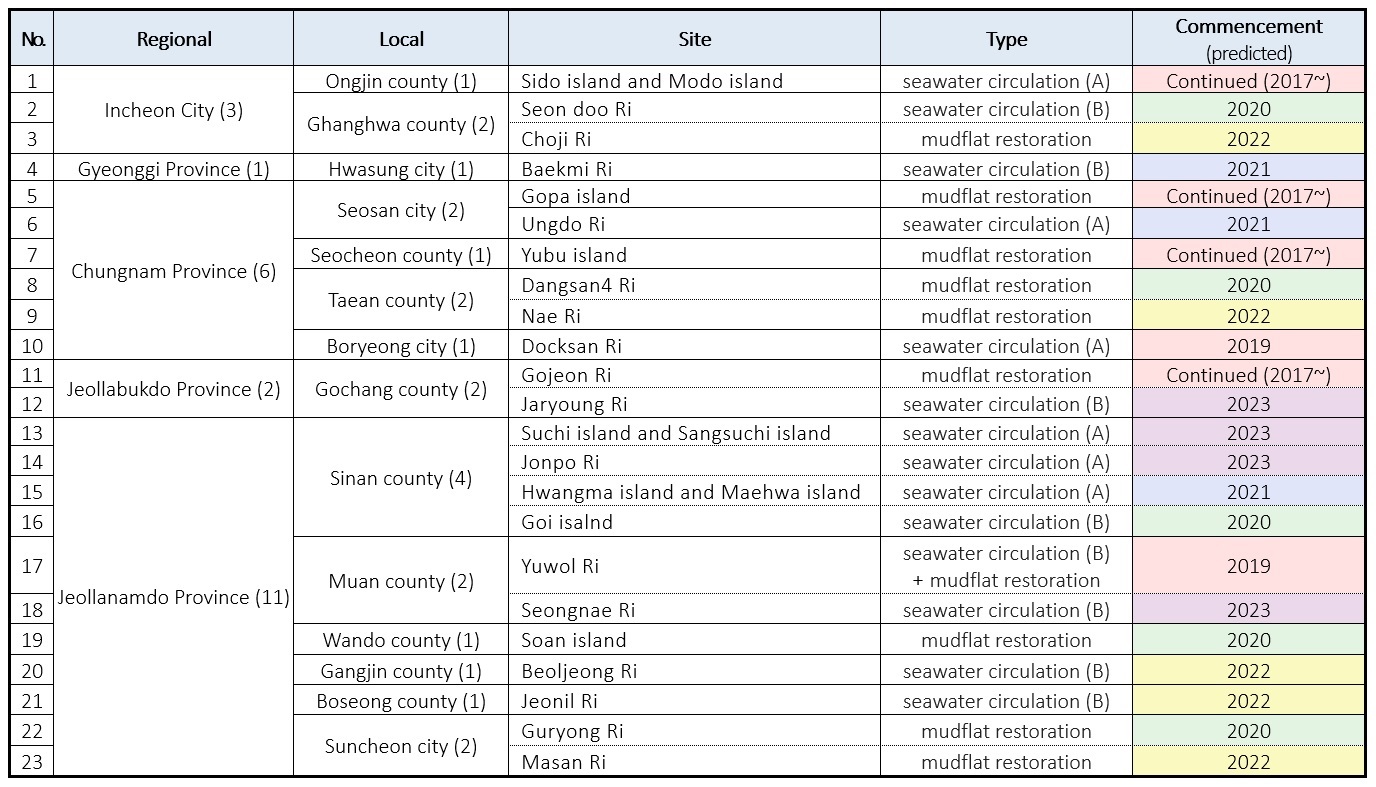