Promoting the wise use of artificial wetland – fishponds in Hong Kong

Conserving the natural habitats is the priority for conservation in the field, but at sites where habitats had been modified and degraded, we should promote the restoration and wise use of the modified habitats. EAAFP new Partner, the Hong Kong Bird Watching Society (HKBWS) has been working on conserving the birds’ habitats for long, and has been practising wise use of wetlands under fishpond habitat management in the past 10 years. Here they tell the story that habitat management practice in privately-owned fishponds, can work to achieve in protecting migratory waterbirds, their habitats and the livelihoods of stakeholders.

Waterbirds in a fishpond ©HKBWS

Many waterbirds including the Endangered Black-faced Spoonbill, and wintering ducks, several shorebirds and other fish-eating waterbirds are regularly found in Hong Kong fishpond areas, in which be utilized for foraging and roosting especially during the winter period. This was why HKBWS established a Management Agreement project (MA project) aiming to provide a feeding ground for migratory waterbirds and other birds relying on these commercial fishponds, a type of artificial wetland in Mai Po Inner Deep Bay Ramsar Site and its nearby fishpond areas[1], which are also included in EAAFP Flyway Network Site (EAAF003).

Under the MA project, fishpond operators are required to drain the fishponds to certain water level in order to provide an appealing habitat for waterbirds to forage and roost. Base on survey results and years of observation, it shows success in boosting both abundance and diversity of waterbirds (number of waterbirds recorded in drained fishpond for the former is about 19 times higher than that in fishpond without drain-down). This traditional practice during fish farming cycle could demonstrate how artificial wetlands could benefit to wildlife if sustainable management practices are applied.

In spite of habitat management and scientific research, a healthy partnership is essential to sustain waterbird conservation. Two of the keys are “engagement” and “education”– by involving the stakeholders (including fishpond operators and villagers living nearby the fishponds)[2] in public educational activities, they could eventually understand and accept the work for the waterbirds and appreciate the significance of the sustainable fishpond operation to the nature.

Fishpond Festival is an example to demonstrate how to engage different stakeholders in an awareness-raising event. It is an annual highlighted educational event of the MA project consists of 3 elements:

Fishpond Festival was launched since 2014, and each year caters around 400 participants, villagers, fishpond operators and volunteers within the fishpond and village area of the Inner Deep Bay Ramsar Site. Making use of this location advantage, the HKBWS offered the participants a tour about traditional local pond fish culture operation and what its ecological importance is to migratory birds. This experience is impressive as they can have bird watching opportunity with binoculars and telescope during the walk, and be demonstrated how the daily operation of a fishpond operator does.

Apart from these, in the festival, they also invited local community – villagers and fishpond operators to engage in our festival by teaching in handicraft workshops and making traditional food, as well as selling their fishery products and veggies grown in the village.

Activities including educational exhibition, game booths on wetland conservation and fishpond ecology etc. were arranged for the participants during the Fishpond Festival. ©HKBWS

In this point of view, the local fishermen and villagers are not merely a partner providing venue and services to the event, but educators and targets to be educated at the same time. By interacting with the general public, they could open themselves to share their life-long experience working on pond fish culture, and from the response of participants they have confidence to reckon their traditional skills and knowledge are important to local generations.

From the above festival activities, the HKBWS engaged different stakeholders and educate them to appreciate fishpond ecology, culture of local community, as well as to promote the local freshwater fish to show our support to local pond fish culture. In return, local community and general public showed their support by joining the event again next year, which is a great breakthrough of the MA project.

The Sixth Fishpond Festival has been successfully launched between 29th January and 5th February, 2021. This year, the Fishpond Festival went entirely online to adapt to the “stay-home” situation due to pandemic. This is another breakthrough since it was the first virtual festival for the project. HKBWS especially organized various educational activities and videos for the festival, to further promote local pond fish culture, fishpond wetland and bird conservation messages to more general public via online activities. At the same time, they also organized online workshops consist of ecological, art and cultural elements, such as sketching lesson of Oriental Pratincole – a migratory shorebird species with a distribution range covering most of the area of EAA Flyway and regularly found in the Hong Kong fishpond area, handmade fishnet-bag workshop and Black-faced Spoonbill needle-felting workshop. By sending material kits to registered participants beforehand, more participants could join safely at home.

Apart from the online workshops, there was a diverse programme in line with the Festival, they invited actor and a local farmer Mr. Joey Leung to film a video to promote local freshwater pond fish. The project mascot—Mullet-kun taught how to choose good local freshwater fish, another HKBWS vlog introducing fishpond. All these mentioned videos altogether received over 11,000 views.

The MA program also catered and reach out to underprivileged people. HKBWS  launched the “Fish for All” program in which they donated fish to local food bank to spread the conservation message and care for those who are in need of food. 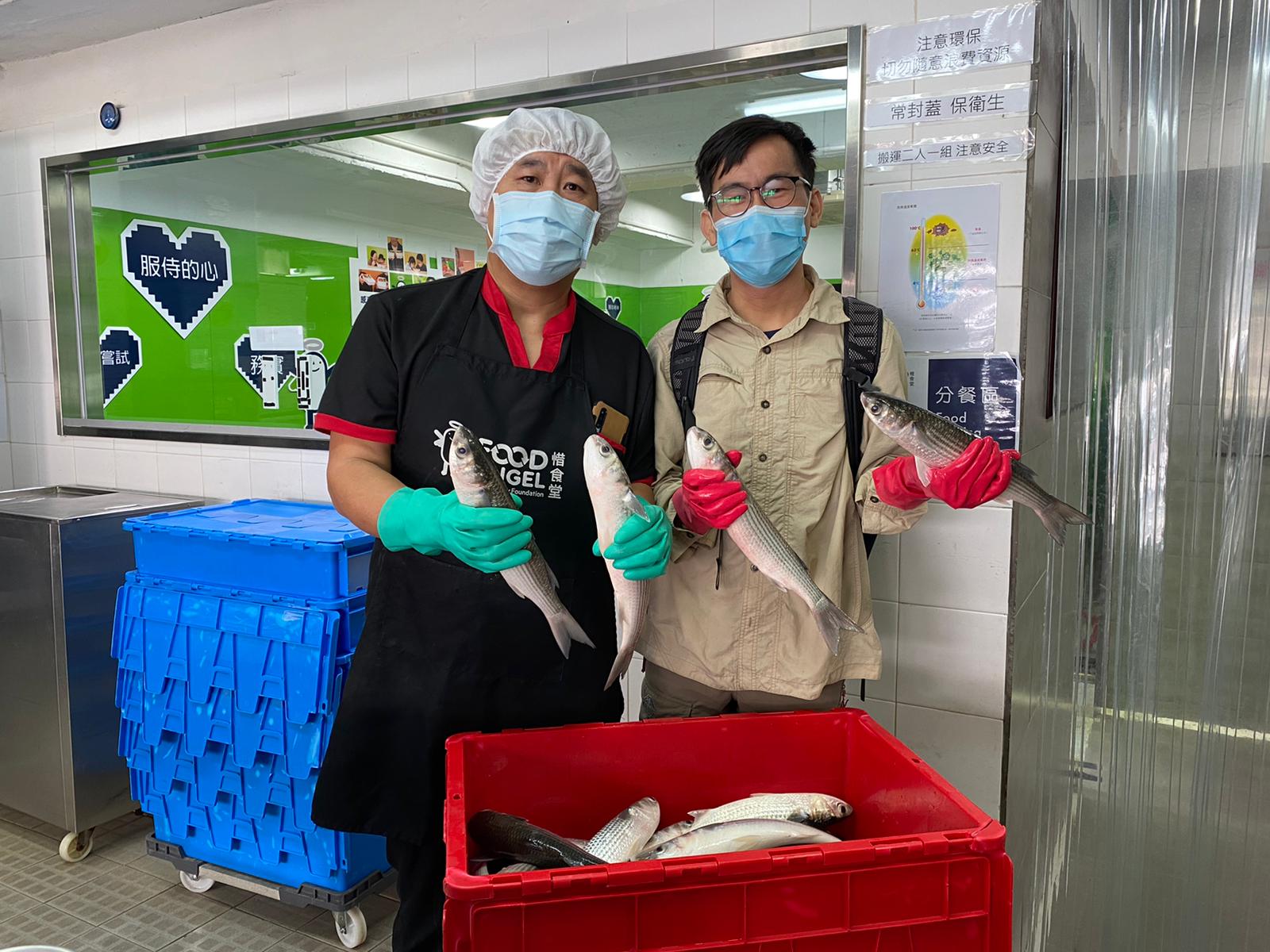 Mullet-kun reaching out to citizens at a local market to promote support to local pond fish ©HKBWS.

Through the above-mentioned events, which are only parts of the public participation activities under the MA project, HKBWS has demonstrated how an educational event could engage local community and the general public. In the next article, HKBWS tell more in-depth how artificial wetland could play the role in East Asian-Australasian Flyway to migratory waterbirds. It is hoped that the optimal ecological value of these artificial wetlands can be maintained, so that ‘fishpond for flyway’ is sustainable to the migratory birds among EAA Flyway in long term.

[2] in this case fishpond operators and villagers living nearby fishpond